NFL Week 5 Best Bets: Our 4 Picks from the Sunday Slate 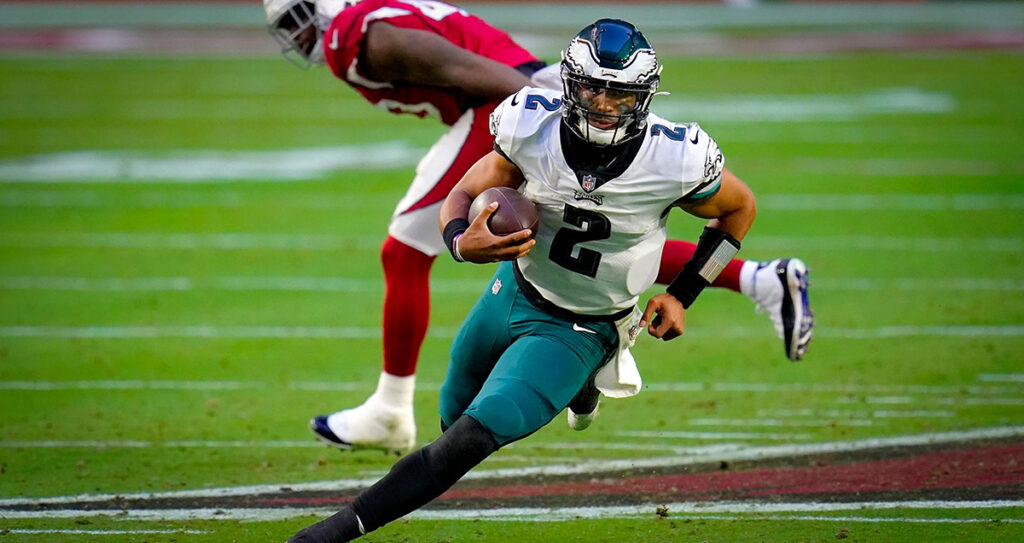 Jalen Hurts and the Eagles are 5 point favorites against Arizona, and are one of our best bets for week 5.

After our first .500 week of the 2022 NFL season, our best bets sit at 12-4 through 4 weeks. The NFL Week 5 slate is packed with premiere matchups, and Sunday's slate features a handful of must-see games including the Chargers at the Browns, the Eagles at the Cardinals, and the Cowboys at the Rams.

As usual, we have narrowed down the entire week 5 slate to our 4 best bets. Let's look to go 4-0 and move back above the 80% win rate on the season.

The Falcons are one win away from a winning streak and being over .500 for the 1st time this season. After starting out 0-2, they have won back-to-back games against Seattle and Cleveland. They are 8th in the league in scoring with a 25.8 average. Marcus Mariota has been playing surprisingly well in his 1st season directing the offense. They are one of the least penalized teams in the league which has allowed them to keep drives alive. They are averaging north of 150 rushing yards per game which has led them to victory in their recent games.

The Bucs look to be a team searching for its identity. After beating Dallas and New Orleans to start their season, they fell to the Packers and then the Chiefs on Monday night in ugly fashion. Even in their 2 wins, they did not look all that good and basically took wins from their opponents’ blunders. They are holding opponents to just 17 points per game even after giving up 41 to KC last week.

Atlanta has been a cover machine and the Bucs have been anything but that. If the Bucs were clicking on all cylinders, we would lean their way here. However, they are far from being in mid-season form and with Brady’s name being all over the media causing a distraction, we believe Atlanta will keep this game closer than many think and get us the cover but lose the game.

Some things just remain the same and some could say that reigns true with this Detroit franchise. After losing multiple games by one score last season, Dan Campbell was set on flipping that script this season. However, at 1-3, all three of their losses have come by 4 or fewer points. Jamaal Williams has been a beast on the ground filling in for the injured Swift. St. Brown and Hockenson have been threats through the air while the defense has been bad, to say the least. They are last in the league, allowing 35.3 points per game.

New England is on their 3rd string QB after Mac Jones and recently Brian Hoyer went down to injury. Jones is thought to be back for this matchup with Detroit, but he really has not impressed this year to date. They have utilized their run game with Stevenson and Harris to get their lone victory on the road against the Steelers. Defensively, they have been holding opponents passing attacks in check with just 211 yards per game.

Detroit can not keep losing these close games and here we believe is where that will change. The Lions’ ability to run the ball will be the difference. While their defense is not great, the Patriots’ offense is bad enough to keep them in the game and with a strong rushing attack, the Lions will control time of possession and steal this one on the road.

The Eagles are the last undefeated team in the NFL and have won games in every fashion. Last week, they finally faced some early adversity. They were down 14-0 to the Jags in a blink of an eye. Jalen Hurts rallied the team and not only got them back in the game, but they also dominated the final 3 quarters. Miles Sanders is looking like the back everyone thought he would be when he came out of Penn State and the defense has been tremendous at getting to the quarterback and making big plays in the secondary. Their prowess for picking off QBs has placed them 1st in the league with a +2-turnover differential.

This Cardinals team is a real Jekyll and Hyde. That is really an extension of their QB, Kyler Murray. There are times he looks like a top 5 QB in the league and then at other times, he looks like an overwhelmed rookie. They rank 15th in the league in both passing yards and rushing yards. Their defense has not been able to hold opposing offenses from putting up points as they are allowing 25.8ppg which is one of the worst in the league.

Arizona has gotten off to some really slow starts this season and at times have been able to rally back. This game may end up being similar to the Eagles’ game at Detroit where they jumped all over them early and allowed them to come back and barely hold off the Lions. Here, we don’t expect that comeback to occur. The Eagles will keep their foot on the gas pedal and blow this mediocre Cardinals team out.

The 9ers are coming off their biggest win of the season which has brought them back to .500. They avenged their NFC Championship loss to the Rams last week, defeating them 24-9. The defense has looked tremendous and is tops in the league in allowing just 11.5 points per game. Jimmy G has done a decent job filling in for the injured Trey Lance and Jeff Wilson Jr shows bursts of tremendous talent out of the backfield. In the end, this team goes as Deebo Samuel goes. When they are able to get him into space, the offense thrives and the defense is able to catch a break.

Carolina is just 1-3 on the season and some are already calling for Baker Mayfield to be benched. Their lone win came 2 weeks ago over New Orleans and last week they were held to just 16 points by the Cardinals in a 26-16 loss. The Panthers have been decent on defense, holding opponents to around 21 points per game. If they can get just a spark from the offense, they could be a much different team.

This line looks off to us, and the fact that San Fran is coming off a super high-emotion win on Sunday night, this seems like a letdown spot. Baker will need to show something to keep his job here and we believe he will use McCaffery to his full advantage in doing so. Defensively, they will keep Deebo in check which will shut down Jimmy G’s options.