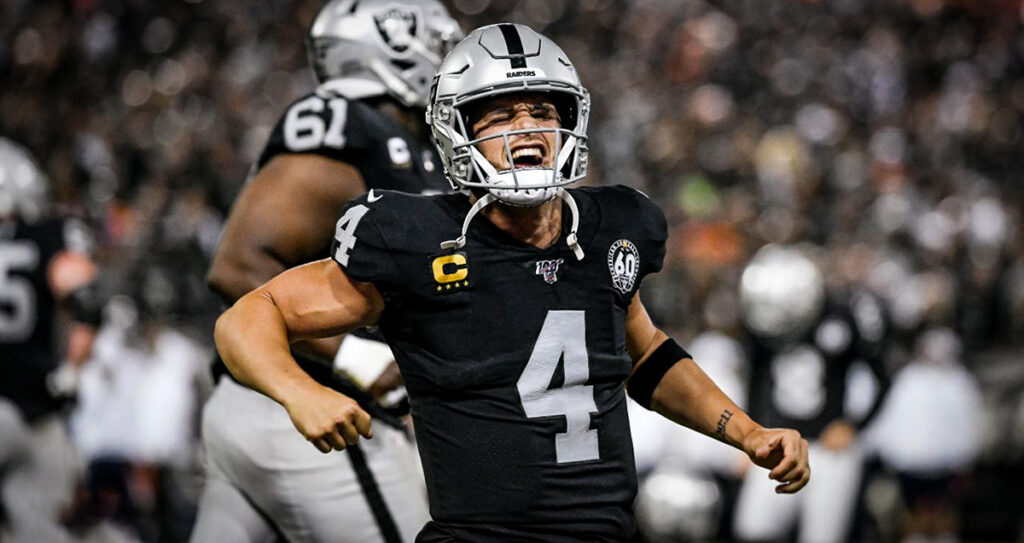 We expect Derek Carr and the Raiders to cover the 2.5-point spread and pick up their first win of the season in week 4.

This Sunday's NFL Week 4 Sunday slate features 13 games that kick off at 9:30 AM with a London matchup between Minnesota and New Orleans. Through the first three weeks of the NFL season, our best bet picks sit at 10-2. While an 83% win rate is unsustainable, we will look to stay hot with a group of week 4 picks that we feel offer a ton of value.

Be sure to check out our week 4 player props for another 14 ways to beat the house on Sunday.

The Jaguars could easily be 3-0 this season. Their Week 1 game against the Commanders is their only blemish. In that game, the Jags led 22-14 early in the 4th quarter before Carson Wentz stole the game late. After that loss, the Jags shutout the Colts 24-0 and last week defeated a good Chargers team in impressive fashion 38-10 on the road. They are 8th in the league in total yards per game and are 3rd in time of possession. They look to get over .500 on the road when they head to Philly.
The Eagles are one of two teams with a perfect 3-0 record. Jalen Hurts has looked like an MVP candidate and coach Sirianni has mixed the run game more into the offense than in the past. Defensively, the Eagles are coming off a game in which they sacked Carson Wentz 9 times. They are leading the league in yards per game and are 3rd on 3rd down.

As much as we love the Eagles this season, this line seems very dangerous. We have mentioned before how bad home favorites have been as 3.5-6.5-point favs. The Jags should be 3-0 and this game could very well come down to whoever has the ball last. The Eagles are coming off a big emotional win against their former quarterback and divisional foe. We believe the Jags will be right in this game the entire way and will test the Eagles late in this one.

Washington is just 1-2 on the season and are extremely lucky to have that one win. We mentioned the way the game played out in our breakdown of the Jags/Eagles game. They are 7th in the league in both time of possession and 3rd down efficiency. They are coming off a game against the Eagles where they could not seem to move the ball on offense and the defense did them no favors.

Dallas is entering their 3rd game with Cooper Rush at the helm. He has been serviceable enough to get 2 wins in his 1st games this year over Cincinnati and the Giants. It has been the defense leading the way for the Cowboys as they are holding opponents to just 17.3 points per game. Tony Pollard and Ezekiel Elliot have been a solid 1-2 punch on the ground and CeeDee Lamb had a nice breakout game last week.

We love the Cowboys this week. Carson Wentz hit the ground 9 times against the pass rush of the Eagles. This week, he faces a Cowboys defense that leads the league in sacks with 13 through these 1st three games. We believe the Dallas defense will cause enough issues for the Commanders to keep this game low scoring where the Cowboys are comfortable.

New England is just 1-2 on the year. Their lone win coming over Pittsburgh on the road in Week 2 where the Pats held the Steelers to just 14 points in the 17-14 final. They have had a decent rushing attack going for 115 yards per game which is 13th in the league. Their defense has done a good job getting to opposing quarterbacks with 10 sacks which is good enough for 5th in the league. Mac Jones is out as he was injured last week so veteran Brian Hoyer will get the start.

Green Bay has started out eerily similar to last season. They were trounced in game 1 against the Vikings but bounced back by defeating the Bears in Week 2 and then knocked off Tampa 14-12 on the road last week. However, it has been the defense that has been the story. They have been holding opponents to just 15 points per game which is 6th in the league. With their defense being a strength, they have maintained a strong hold on time of possession in their wins.

We are expecting the Packers to be dominant in this game. The Patriots have little to no weapons on offense and while Brian Hoyer will not be much of a step back from Jones, he certainly will not be a step forward either. Aaron Rodger will continue to keep the offense chugging and will utilize his 1-2 running combo of Aaron Jones and AJ Dillon to coast to this victory.

The Broncos may be 2-1 but it feels more like 1-2 or 0-3. The offense has just not found their rhythm with new QB Russell Wilson. Most expected him to come in and start putting up monster numbers right away. Instead, they are 2nd to last in the league in scoring with just 14.3 points per game. Luckily, the defense has been up to the task. They are holding teams to just 12 points per game which is 2nd best in the league. The running game has been good for the Broncos and has helped them maintain a good advantage in time of possession.

As bad as the Broncos offense has been, it could be argued that this Raiders team has been worse. After acquiring Davante Adams in the offseason, it was thought that these Raiders would be a legit threat in the division. However, we are 3 games in and the Raiders have yet to win even one. They are in the top 10 in passing yardage per game but have lacked a true running attack.

We believe this is the game the Raiders finally get off the snide. The threat of the Broncos offense is minimal and we expect Maxx Crosby to cause disruption all day long off the edge. The Raiders offense will put enough puts up to get a good distance from the Broncos here.