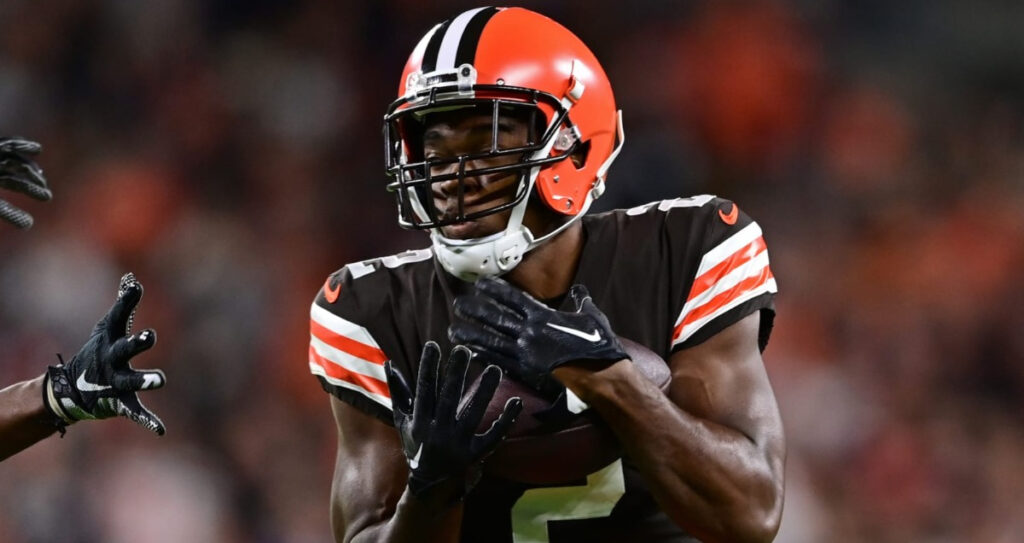 Amari Cooper has had a fantastic start for the Browns and he's one of our top wideouts for NFL Week 4.

Our Week 4 DFS lineup includes a couple of young players who have had breakout performances in recent weeks along with some ol’ reliables. In the matchup-based nature of daily fantasy football, we’re avoiding those where the floor is lowest to find value in some less than marquee games.

This week’s top contest from FanDuel is their $1.8M NFL Sunday Million. This edition will pay out the top 110,000 finishers and award the winning player a $300,000 prize. With $300 left over in the salary cap, here is this week’s DFS lineup.

Ryan and the Colts have underwhelmed relative to their 24-1 Super Bowl odds to begin the season, but may have found something last week with a home victory against Kansas City. They welcome division-rival Tennessee to Indy for Week 4, a team that has been bottom-10 in the league in terms of opposing quarterback scoring this season.

Ryan likely won’t break 20 points, but we also don’t think he’ll get less than 12, which is enough to justify the talent throughout the rest of this lineup.

These two running backs combined for 40 touches in Week 3 and have matchups with teams in the bottom half of opposing running back scoring this season. The Steelers host the Jets, who’ve allowed more RB fantasy points than 27 teams. Harris had been rumored to be banged up entering this past week’s loss to Cleveland but gets a long week of rest before a 1pm Sunday kickoff.

Pierce exploded for 22 touches, 101 total yards, and his first pro touchdown in the Texans’ loss to Chicago in Week 3. This is the week fantasy players had been waiting for, and Pierce delivered when he was given the large workload. We like Houston to feed their young back after this emergence and take advantage of a matchup with the Chargers and their injured quarterback.

Cooper has had back-to-back weeks of 10+ targets and 100+ receiving yards and ranks in the top 20 in the league in targets, catches, receiving yards, and touchdowns. He’s the clear #1 target for Brissett in a matchup with the porous Falcons defense.

We’re pairing Cooper with DeVonta Smith and Jahan Dotson in Week 4. Smith erupted for 26.9 fantasy points in Week 3 against Washington and has re-established his position in this receiving corps after going without a catch in Week 1.

Dotson cooled off in that Week 3 NFC East clash but scored more than 32 fantasy points in Weeks 1-2 combined. He's a reliable target for Wentz on third downs and in the red zone.

Freiermuth hasn’t had the catch volume of other tight ends this season, but is 8th in TE receiving yards and has a touchdown to go with it. This matchup, like Harris’, against the Jets, is a good one for him and we are confident Freiermuth will record his second touchdown of the season.

CMac has 50 carries for 243 yards through 3 weeks and has logged back-to-back 100-yard rushing performances against the Giants and Saints. The fact that he’s still getting in practices each week and proving to be durable on Sundays is a great sign even if he has only found the end zone once.

Arizona has allowed the 3rd-most points to opposing running backs this year, and we see this as McCaffrey’s early season statement game. That justifies his big price tag in this week’s lineup.

The Cowboys' defensive front has to be foaming at the mouth to get after Carson Wentz this week. Dallas has recorded 11 sacks in the last two games, and Washington just allowed Philadelphia to sack Wentz nine times at home in Week 3.

This will be another nightmare in the pocket for Wentz and the Washington offensive line. The turnovers will be there for the taking unless the Commanders have made a serious adjustment week to week.