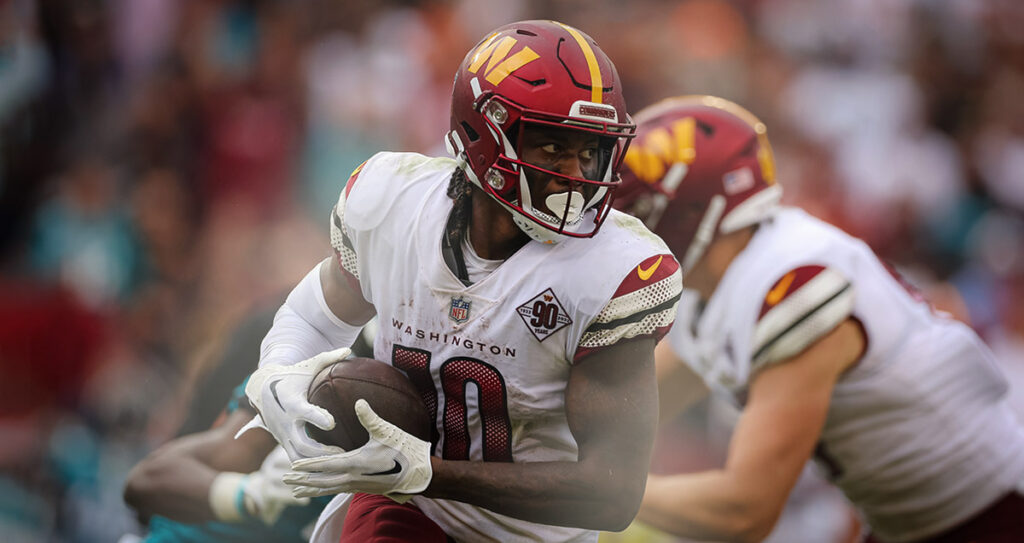 Where do Curtis Samuel and Jahan Dotson fall in our waiver wire rankings after huge week 1 performances?

Holy smokes. We made it! Week 1 of the NFL season is in the books, and if the rest of the season is anything like the first week, buckle up, folks. We’re in for a wild ride.

Week 1 brought upsets in Broncos-Seahawks, Steelers-Bengals, Giants-Titans, and we even saw a tie between the Colts and the Texans! Who had that on their bingo card?

With all of that being said, many players shined on their respective teams this past weekend. We expected some, and others certainly came out of the woodwork. Heck, you might not have even heard of some of these players!

The week 1 waivers can provide for both promise and heartbreak. Look at last season's waiver wire darlings Elijah Mitchell and Cordarelle Patterson. These guys were sure to help propel your team to wins week after week, once you snagged them from waivers. We also saw players like Tyson Williams and Zach Pascal, who had fantastic opening weeks and never were heard from again. Let’s take a look at the top 5 players who shined in week 1 of the 2022 NFL season, and are worthy of a waiver wire add this week.

Wide Receiver, Washington Commanders
Two commanders in a row. I know, I can’t believe it either. Samuel looked like he had played with Wentz for years. Their chemistry was pheromonal, resulting in 8 catches for 55 yards and a touchdown, which ended up totaling 19.2 PPR points. Samuel should be a favorite target of Wentz moving forward, and I expect his excellence to shine through as a reliable target, week after week.

Carson Wentz is back, baby! In a 2019 MVP campaign-Esque outing, Wentz threw for 313 yards and 4 touchdowns, which equated to 29.7 PPR points. While Wentz won’t guarantee you many (or any) yards on the ground, he will make up for it in the air. He has great young weapons in Terry McLaurin, Antonio Gibson, Jahan Dotson, and Curtis Samuel, and is most definitely worth a waiver claim this week. He has a favorable schedule the next few weeks against the Lions, Eagles, Cowboys, Titans, and Bears, making him more than a 1-week wonder on your roster.

DJ Moore, who?? In week 1, Anderson saw 8 targets from his new QB, Baker Mayfield, which he turned into 5 catches, 102 yards, and a touchdown. This was good for a WR 10 finish on the week, totaling 21.2 total PPR points. Anderson has the trust of Mayfield, and while the Panthers may not win too many games this season, Anderson will continue to see targets week in and week out. Anderson will make a great WR 3 on your team for the rest of the season and is worthy of occupying the flex position as well.

Jamaal Williams is one of the most fun players in football, in my opinion. Williams is a great teammate, a regular class clown, and a PPR machine. Week 1, he finished as RB 16, with 16 PPR points. Williams was a regular in the Lions offense in Week 1, with 11 touches and 2 targets, which was good for 2 touchdowns on the week. Williams is a great flex play week-over-week and is assuredly worthy of a waiver wire add this week.

Tight End, Houston Texans
Howard recently was signed by the Houston Texans and certainly balled out in his 2022 NFL debut. Howard scored 17.8 fantasy points, which was mostly propelled by his two touchdown catches. Howard is number 5 on this list for a
reason: I would caution any fantasy manager, as touchdowns are difficult to predict, and he was only targeted twice in this game. But, if you’re looking for a boom or bust guy to add to your squad, OJ Howard is certainly worthy of an add.

Here is our complete list of the top 15 waiver wire targets ahead of week 2 of the 2022 NFL season: