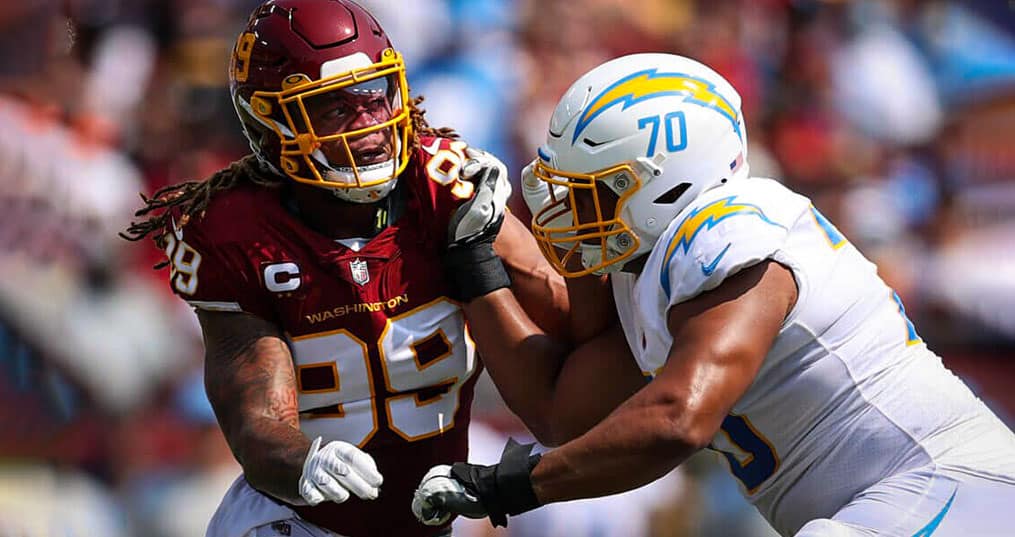 If this is your first season betting the NFL, use this as a key lesson. If you’re waiting to bet NFL games on Sunday, you’re most likely getting the worst of the line. Attack soft lines early and often. This article will look to identify some early opportunities I’ve noticed on the Week 2 schedule.

PointsBet has extended their industry-leading new player offer through week 2 of the NFL season. Here is how to lock in this offer:

Are you kidding me? Did anyone watch the New York Giants on Sunday afternoon? The Giants looked like one of the worst teams in the league on both the offensive and defensive sides of the ball. Between Daniel Jones’ poor play and Jason Garrett’s awful play call, it’s hard to place any confidence in the 2021 Giants. Head Coach Joe Judge made a bad mistake challenging a touchdown call in the first half of the Giants’ 27-13 loss to the Broncos.

After the game, he said that he was aware of the rule against challenging scoring plays, but threw the flag because he felt the refs were “ignoring him.” Regardless of if he’s telling the truth, it was a foolish move that cost the Giants a timeout.

For Washington, they lost 20-16 against the Los Angeles Chargers, but more importantly lost starting QB Ryan Fitzpatrick with a hip injury. While I do rank Fitzpatrick higher than backup Taylor Heinicke, I don’t think there will be a significant dropoff in play.

Washington had a tough time moving the ball against an impressive Chargers defense. To their credit, Fitzpatrick didn’t have the opportunity to get in rhythm and Heinecke was not terrible off the bench. The Giants defense seemed to let Teddy Bridgewater and the Broncos move the ball at will, especially on third down. Washington will have a much easier time on Thursday night, with both the pass and rush defense looking suspect for the Giants.

The Football Team looked scary, forcing 2 fumbles, 1 INT, and 5 QB hits while holding the Chargers to 20 points. Washington’s front line should feast on the Giants' offensive line woes. The pass protection held up decently against the Broncos, but the run block was abysmal for the Giants. The Football team’s rush will cause a much more significant problem than the Broncos’ did.

Simply put, I cannot believe that the line for Thursday Night Football is as short as -3 for the Football Team. I don’t want to overreact to Week 1, but the Giants have seemingly unfixable problems that played a huge role against an average opponent. Just wait until they go on the road and face off with Chase Young. There are some -3.5’s out there, but many books moved to -3 following the Fitzpatrick announcement. I would recommend *at least* a 2u wager on the Washington Football Team -3 this Thursday against the Giants.

Part of the difficulty of betting the NFL, especially in Week 2, is avoiding overreaction. The Philadelphia Eagles dismantled the Atlanta Falcons on Sunday, 32-6. However, I think this loss is much more about the ineffectiveness of the Falcons than the prowess of the Eagles. The Falcons' offensive play call was truly abysmal, and their defense was just as bad as expected coming into 2021.

I have this Eagles squad as one of the least talented in the league and this victory over the Falcons does not move the needle on their rating. I still don’t trust Jalen Hurts at this level. The Philly offensive line held up against a very lackluster Falcons pass rush that only got one sack and one QB hit on Hurts. That being said, the dynamic defense of the 49ers presents a much different and much more significant problem for this Eagles team.

Bettors who got the worst of the number (-9) on the 49ers this weekend got squeezed, as the 49ers did not cover with a 41-33 final score in Detroit. Again, let’s try not to overreact to the mayhem that was the final two minutes of that game and also take the lesson in attacking lines early. You could have bet the Niners all summer/all week at -7.5 through -8.5. It was only late Sunday morning where the line moved to and through -9.

Aside from his first snap fumble, QB Jimmy Garappolo looked solid. Kyle Shanahan showed once again, he doesn’t need a QB to go above and beyond and that he can plug in seemingly any running back to make this offense work. WR Deebo Samuel had a huge game, going for 9/189 and a TD.

He did, however, have an almost costly fumble at the end of the game that gave the Lions an opportunity to tie this game up. The Niners were leading 41-17 with five minutes left in the 4th until a garbage-time touchdown by Jamaal Williams + 2 point conversion made it 41-25. The Lions then recovered an onside kick (a play that has become a rarity in today’s NFL) and scored AGAIN making it 41-33.

With less than a minute to go in the game, Deebo Samuel caught an eleven yard pass for a first down that should have iced this game. Instead, he fumbled and gave the Lions yet another shot at the end zone, which they failed to convert. I’m not sure if it was a lack of effort or just a string of unlikely events that made this game look close but let’s call it like it is.

The Niners played 3 quarters of dominant football against a terrible Lions team. San Francisco stays on the road and opens with a short line of -3.5 against Philly. This game should be closer to -5.5 or -6 and I expect the line to head that way by the weekend. Bet the Niners now at -3.5 or -4, while you still can for 1u.