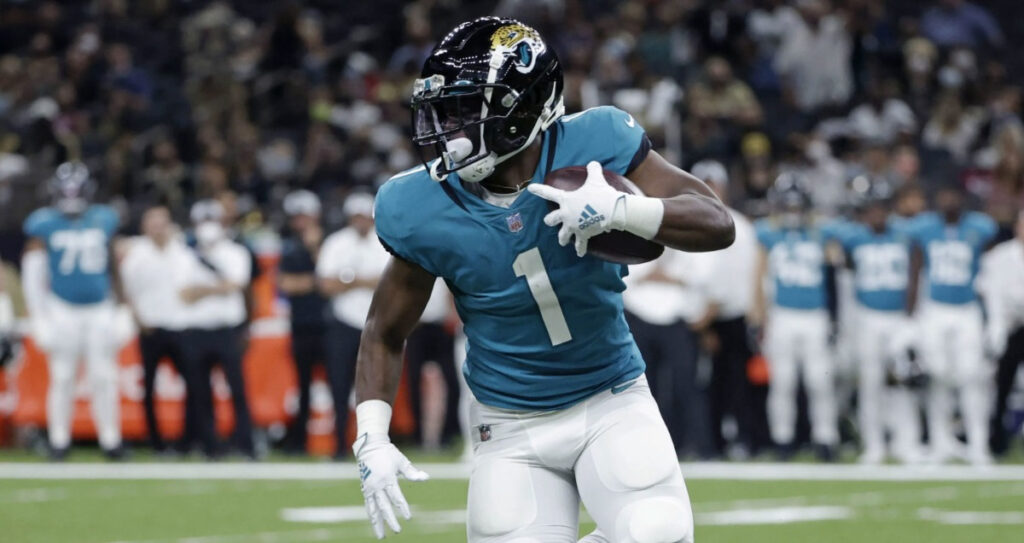 We like Travis Etienne to stay Under 60.5 rushing yards as 1 of our 3 PrizePicks props for Saturday.

Can you believe we're already in the final week of the NFL season? This weekend's card starts off on Saturday with three games for us to enjoy and hopefully profit from. The most crucial matchup will be between the Titans and the Jaguars, and the winner will be crowned AFC South champs.

Let's finish with a bang! Here are 3 PrizePicks props for the Saturday slate of Week 18. Best of luck with all your action.

Taking the best QB in the game to go over his passing yardage prop seems as square as can be. That being said, the bets with the simplest logic are often the best investments. Las Vegas simply doesn't have the pass defense to contain the high-octane offense of Kansas City.

In 9 career games against the Raiders, Mahomes is averaging 315 passing yards. We see him throwing for at least that many in this game, especially since Las Vegas ranks dead last in pass-defense DVOA. The Raiders also rank 29th in passing yards allowed per game.

Patty-Mac should also have plenty of time to throw in this game. Las Vegas ranks next to last in sack rate. Kansas City wants to nail down the #1 seed in the AFC, so motivation shouldn't be a problem.

Let's dust off an old DFS strategy and stack a QB with his favorite target. We haven't done that very often this season, but it makes a ton of sense in this game. Kelce has gone over this yardage total in 10 of 16 games this season.

Kelce has played against the Raiders 17 times in his career. He's averaged 73.6 receiving yards per contest. We've already discussed how bad this Las Vegas secondary is, so Kelce shouldn't have a problem putting up some large numbers in this one.

The former Cincinnati Bearcat is also in great current form. He's gone over this total in 3 of his last 4 games. Riding with Kelce seems like a smart play on Saturday.

For the nightcap between Tennessee and Jacksonville, let's roll with Etienne to stay under this rushing yardage number. The former Clemson star has been on a major roll of late, but we think he comes back down to earth against this Titans rush defense.

Jacksonville's improvement this season has been remarkable. Doug Pederson was obviously the correct hire for this team. Pederson knows that the best way to attack this Tennessee defense is through the air. Because of that, Etienne's carries should be somewhat limited in this game.

For our bonus bet, let's roll with "Captain Kirk" to go over this receptions total. The former Texas A&M Aggie has been one of Trevor Lawrence's favorite targets all year long. He's averaging almost 5 receptions per game, which points in the direction of the Over.

Kirk caught 5 passes against the Titans back in Week 14, and we think he hauls in at least that many in this one. He's gone over this receptions total in 9 of 16 games this season. He's also racked up 5 or more receptions in 5 of his last 8 games.

DraftKings prices this Over at -155, and Caesars isn't too far behind at -154. Unibet even prices this a full reception higher at 5.5. There's too much value on this Over to pass it up.