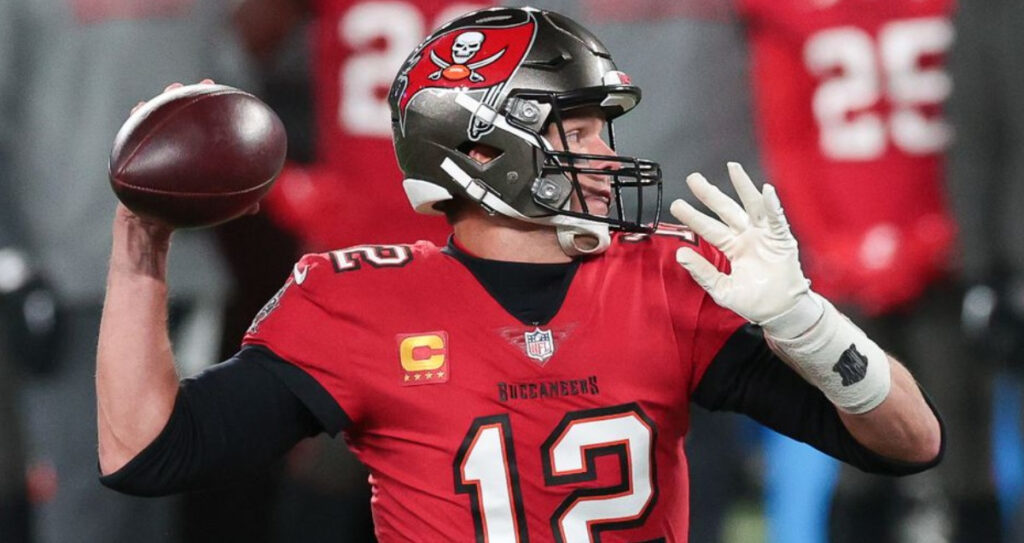 One of our 4 NFL best bets on Sunday is on Tom Brady and the Bucs.

11 games are on the Sunday NFL card, and we've broken down each one of them. Several of this week's games have playoff implications, as the NFL regular season is dwindling to a close. After Sunday's results, we may be able to separate the pretenders from the contenders.

Having trouble deciding on who to bet on this Sunday? You've come to the right place! We've found 4 best bets for December 18! Let's go 3-1 or better with these!

After starting the season 1-6, the Lions have been one of the hottest teams in the league. They have won 5 of their last 6 games, including their last 2 to the Jags and Vikings.

Their only loss was to the Bills 28-25, which most teams in the league wouldn’t even be able to sniff. The Lions completely shut down the Vikings' rushing attack while Jared Goff was efficient on his way to 300+ yards and 3 touchdown passes.

The Jets have been having the opposite play compared to these Lions recently. After starting 5-2, they have lost 4 of their last 6 to sit at 7-6 and 3rd in the AFC East.

Last week, they faced the Bills and hung around through most of the 1st half. Mike White completed 27 of his 44 passing attempts.

As a team, the Jets turned the ball over twice, which was 2 more than what the Bills did. They were tough against the Bills on 3rd down, where they held them to just 2 of 13, but Josh Allen was too dynamic to defeat.

We are rolling with the surging Lions in this one. It appears they have figured out the formula for success.

That formula has been consistent rushing attempts with efficient QB play by Goff and not turning the ball over.

The Jets seem to be spiraling, and the Lions should be able to get this road win. We prefer the -113 moneyline over the -1 spread.

Dallas has quietly been stringing together a nice set of wins. The Vikings, Giants, Colts, and Texans have all fell victim to the Cowboys during this 4-game win streak.

While Dak has not looked fantastic, the rushing attack of Zeke and Pollard has been arguably the best in the league. The defense has shown up, holding opponents to an average of just 16.25 points over this stretch. They still trail the Eagles for the top of the NFC East and can not afford any losses the rest of the way.

The Jags have been doing the old one-step forward, one-step back routine over the last 6 games. Each win has been followed by a loss during that stretch, and their most recent game was a win over the Titans on the road.

In the 36-22 victory, Trevor Lawrence looked spectacular. He finished 30 of 42 passing for 368 yards and 3 touchdowns with 0 interceptions. It was one of his best performances to date.

With many seeing the last 2 close Cowboys victories as a sign of them faltering, we believe they are primed to prove the public wrong in this one.

The Jags are the trendy upset pick this week, but we believe they will not have the defense to stop the 1-2 punch of Zeke and Pollard.

After losing back-to-back games to Minnesota and Buffalo, the Pats got back on track with a 27-13 road win over the Cardinals last week. Kyler Murray went down early due to a non-contact injury that saw him carted off the field.

Mac Jones was pedestrian, but Pierre Strong Jr had a breakout game on the ground. He took his 5 carries and went off for 70 yards and a touchdown. The defense forced 2 turnovers and held the Cardinals to just 210 yards through the air.

Vegas saw their 3-game win streak snapped last week. On the road against the Rams, who were starting Baker Mayfield after he arrived on the team just 2 days earlier seemed like an extremely winnable game.

Leading 16-3 late in the game, the Raiders could not stop Mayfield from leading the Rams back and ultimately finding Van Jefferson for the game-winning score.

Josh Jacobs fell 1 yard short of going over 100 yards for the game, but Derek Carr was erratic. He completed just 11 of his 20 attempts, and 2 of his misses went into the hands of the Rams' defenders.

While the Patriots looked decent and the Raiders looked bad last week, we believe this will be a much different story.

Vegas has played teams with winning records extremely tough this season, and this game will be no different.

We believe Carr and Adams will have a good bounce-back game against these Pats, while Jacobs will surpass the 100-yard mark. We'll take Vegas on the moneyline.

The Bucs got absolutely manhandled last week in San Francisco. Even with Deebo Samuel going down early to injury, the Niners continued to control the game.

Brady was intercepted twice while the run game never got going, and they finished with just 69 yards on the ground. The Bucs could not contain Christian McCaffery as he went for over 100 yards on the ground and scored twice. The Bucs now sit under .500 once again, with the Super Bowl-contending Bengals coming to town.

This one could go either way. They are coming off a 23-10 win over the Browns in which a balanced offensive attack led the way, and a strong defensive performance closed the door on the opponent.

Yes, the Bucs were atrocious last week against the Niners. Yes, the Bengals have looked dominant lately.

However, we have to wonder, why is this number so low. We trust that Brady and the offense will be able to do enough to keep this one close.

We are taking the Bucs with the idea that IF the Bengals are able to cover, we will fade them next week against the Pats with the Bills looming in the next week.

The Bengals' win streak could come to an end before that big Bills matchup, and we believe this is the matchup where it most likely happens. The spread tells us the same.