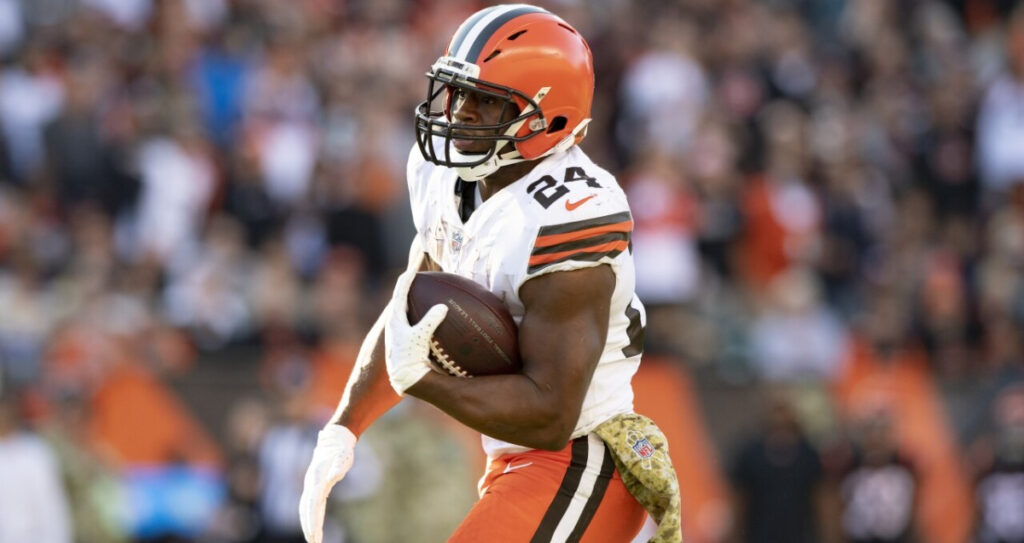 We're big fans of Nick Chubb but think he'll have a rough day against the stifling Baltimore rush defense on Saturday.

Is there anything better than NFL action? Heck no! Thankfully, Week 15's NFL card brings us games on Thursday, Saturday, Sunday, and Monday. After sweeping the board on Sunday with a 3-0 performance, we came back down to earth on Monday Night Football with a 1-2 mark.

Our pick on James Conner Over 57.5 rushing yards made us look sharp. Unfortunately, our plays on Jonnu Smith and Tyquan Thornton didn't have the same impact. Smith was targeted twice but didn't catch a pass. Thorton ended up busting our Under on him by 4.5 yards!

No worries, it's time to move one! Get ready for NFL Week 15 before anyone else! Check out the 3 PrizePicks props for Saturday that we absolutely love.

Does anyone know why Jefferson's yardage number is so low at PrizePicks? Sure, the Colts secondary isn't terrible (15th in Pass Defense DVOA), but even great defenses have had a tough time slowing Jefferson down this season. The former LSU Tiger is averaging a whopping 115.4 receiving yards per game!

We love that DraftKings, one of the sharpest sportsbooks for player props because of their DFS background, prices this prop 6 yards higher than PrizePicks! That tells us that there's some good value in taking this Over.

Here are some other trends in favor of this Over. Jefferson has gone Over this amount of receiving yardage in 9 of 13 games this year. He's also gone over this amount in 8 of his last 10 games.

Here's another number that simply looks too low! Diggs has been an absolute beast the entire season! He's gone over this receiving yardage total in 10 of 13 games, which is pretty insane when you think about how many double teams he faces.

The Dolphins don't exactly have an elite secondary either, and that's putting it kindly. Miami ranks just 22nd in DVOA pass defense. That probably won't bode well against a Buffalo offense that ranks 3rd in that same category.

Diggs is also in excellent current form. The former Maryland Terrapin has racked up 77 or more receiving yards in 7 of his last 9 games. He was only targeted 5 times last week, but that was because possible Rookie of the Year Sauce Gardner was blanketing him all day. We think Diggs bounces back in a big way in this game versus Miami.

Chubb has gone Over this total 9 times this season. So, why are we taking the Under? We're big believers in this Baltimore rush defense!

The Ravens just held Najee Harris in check last week, and they have the ability to keep Chubb under wraps as well in Week 15. Baltimore only allows 3.8 yards per rush, which ranks 3rd in the league. They also rank 2nd in rushing yards allowed per game (81.2).

The Browns have a nice O-line, but veteran defenders like Calais Campbell and Justin Houston know how to live in the opponent's backfield. Chubb's gone Under this number in 3 of his last 5 games, and he could be in for a long day in this one.

Chubb's career numbers versus Baltimore aren't all that impressive, either. The former Georgia Bulldog has only averaged 60.4 rushing yards against the Ravens in 9 career games. We don't mind investing our money with the Baltimore defense in this one, so take the Under on Chubb.

Best of luck with all of your NFL action this Saturday! Between the NFL and some college bowl games, it's going to be a fun ride this weekend! Let's cash!