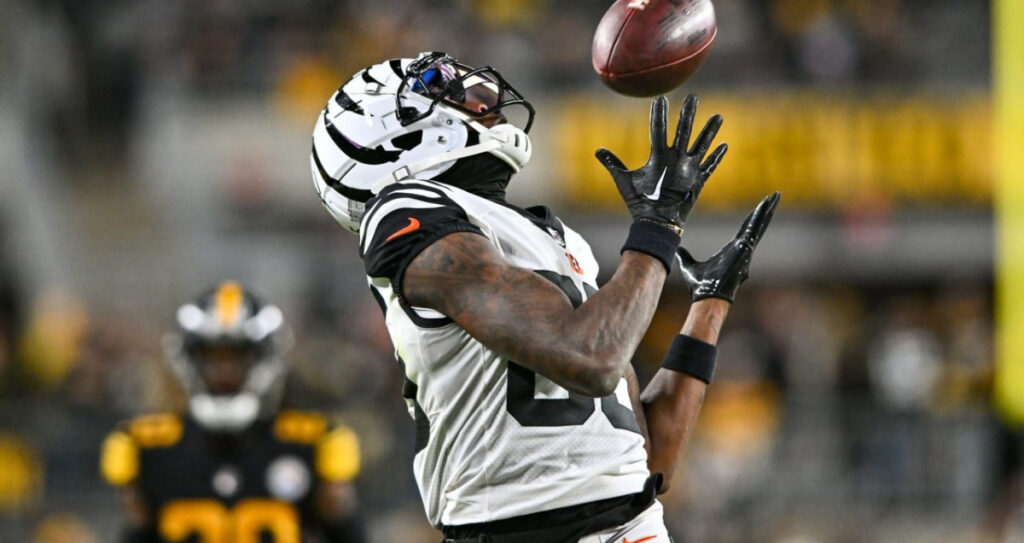 Tee Higgins is a key piece of our NFL Week 12 DFS lineup for the FanDuel Sunday Million!

Our Week 11 lineup was quite forgettable in the end, which usually happens when the starting defense outscores all three running backs in your lineup. Last week’s disappointment immediately turned into this week’s excitement when we saw the schedule of three Thanksgiving Day games.

No teams are on a bye for the first time since Week 5. Ahead of this week’s full slate of game action, we look to bounce back with our Week 12 DFS lineup in FanDuel’s headlining Sunday contest.

Heinicke and Washington return home after back-to-back wins on the road in Philadelphia and Houston. The Commanders established their ground game in both victories and mostly relied on Heinicke to move the chains on third down (12-of-21 against the Eagles) and make throws in crunch time.

We project Heinicke to break out of his touchdown slump against a Falcons defense that has allowed the 4th-most passing yards per game in 2022. This is a great price!

Both of these backs are taking advantage of opportunities they’ve been given with their second teams of the 2022 season and look primed to build off of strong recent performances.

Wilson carried the ball 17 times in his second game as a Dolphin, nine more than Raheem Mostert in Week 10, and has scored touchdowns in each of those two games since his trade to Miami.

Murray steps into a true lead-back role in Week 12 after the Broncos cut Melvin Gordon following his fifth fumble of the season last week against the Raiders. He’ll get the bulk of the work this Sunday against the Panthers.

Higgins is coming off his best performance of the season with nine catches for 148 yards in Cincinnati’s Week 11 victory against Pittsburgh. He saw a season-high 13 targets from Joe Burrow in that game and should be in for a similar workload against Tennessee.

Kirk returns to action this week after Jacksonville’s bye to face a surging Ravens team at home. He’s averaged 9.5 targets and caught three touchdowns in his last four games after a quiet few weeks in early October.

Palmer has become a fixture in the Chargers’ offense while his fellow receivers have displayed inconsistent availability for most of the season. He’s now seen 40 targets in his last four games and has racked up over 300 receiving yards and two touchdowns in that span.

After taking three weeks to recover from an ankle injury, Njoku put up a meager two catches and 17 yards on three targets this past Sunday against Buffalo. We are confident that he’s shaken off some of that rust and will improve against Tampa Bay at home in Week 12.

The Miami product is top-8 among tight ends in receptions and receiving yards per game in 2022.

Godwin has been a target machine for most of this season in a pass-heavy Bucs’ offense. He ranks 11th among wide receivers in targets and receptions per game in eight appearances and has a streak of seven consecutive games with 6+ catches entering this matchup with Cleveland on Sunday.

Washington was impressive in a stifling win against Houston last week and has now scored non-offensive touchdowns in two straight weeks. They tied a season-high with five sacks in Week 11, and face an Atlanta team that is top-10 in the league in offensive turnover rate this season.