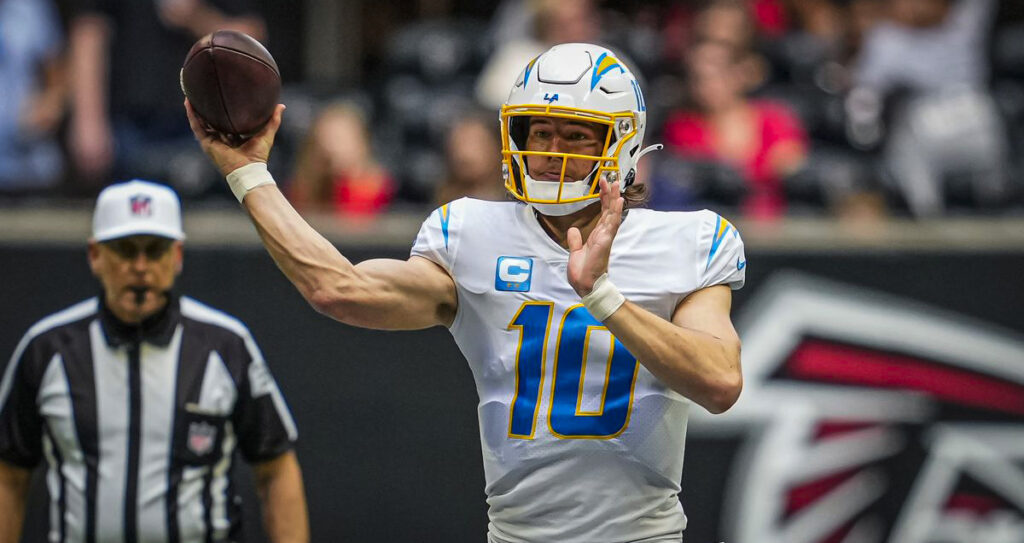 We expect Justin Herbert and the Chargers to cover as road favorites in week 12.

After an entertaining Thanksgiving Day slate of games, the NFL schedule turns to a Sunday slate that is loaded with intriguing matchups. In total, we have 11 games on Sunday afternoon and the action caps off with the Packers at the Eagles in primetime.

Our team has broken down the entire Sunday slate to identify our best bets for week 12. Here are the 4 games that stand out as offering value on Sunday. We've included live odds from every game to help you find the best number. A big shoutout to PointsBet Sportsbook, which has the best available number for 3 of our 4 best bets from week 12.

The Ravens are 7-3 on the season and are riding a current 4-game win streak as they head into Jacksonville this Sunday. Their losses have come against teams that have a combined record of 22-10. Their last win left a lot to be desired. They defeated the lowly Panthers 13-3 at home in a game that should have been a run away win for the Ravens. They forced 3 Panther turnovers but were unable to cash in on 2/3 of them. Luckily, Lamar Jackson ran in a short one late in the game after a Baker Mayfield interception.

Jacksonville has lost 6 of their last 7 with their lone win coming at home against the Raiders 27-20 just three weeks ago. They are coming off a bye but the game previous was another loss to the Chiefs. The game was never closer than the final differential as the Chiefs came out of the gate strong. Despite winning the turnover battle 3-0, the Jaguars could not move the ball enough to get scoring opportunities. 4 of 14 on third down did not help the effort. Patrick Mahomes lit them up for 330 yards and 4 touchdowns.

The Ravens have looked strong and the Jags have looked bad over their recent stretches. So, one has to wonder why the spread is so low here for the Ravens. We believe the bye week which allowed the Jags more time to prep for Jackson and the Ravens will pay dividends. The Panthers provided a decent blueprint for the Jags to follow in order to keep this one close.

It has been a really rough go for Bears fans since their 2-1 start to the season. They have lost 7 of their last 8 games, including the current 4-game losing streak they are on. Their latest loss came on the road to the Falcons last week. They led by 10 with just 5 minutes left in the half, only to see that disappear completely after Cordarrelle Patterson returned a kickoff for a touchdown and Younghoe Koo drilled a 40 yarder to knot the game at half. The Bears then found themselves tied again with 2 minutes remaining before Koo kicked the game winning field goal. Justin Fields was only able to toss for 128 yards through the air and the 7 penalties the Bears committed over doubled the Falcons.

The Jets were riding high having won 4 straight games before then dropping 2 of their last 3. Last week, they faced rival New England on the road in a game that featured no offensive touchdowns. The teams combined to go just 7 of 29 on 3rd downs and 6 total points before the Jets kicked to Marcus Jones who took it to the house for 52 yards and the 10-3 Pats victory.

The Jets have made a change at quarterback having benched Wilson for Mike White. The Bears will use the #1 rushing offense in the league which averages almost 200 yards per game to control this game. White will have limited opportunities to drive his team into scoring opportunities and the Bears will keep this one close enough to cover in a low scoring affair.

Things in Vegas had gone from bad to worse after they gave the newly appointed Colts head coach, Jeff Saturday, a win in his debut. However, they bounced back nicely on the road in Denver the following week. It took overtime, but Derek Carr hit Davante Adams on a 35 yard touchdown pass to walk off the win. They outgained the Broncos 407 to 320 and overcame 9 penalties that went for 98 yards.

Seattle had their 4-game win streak snapped 2 weeks ago as they lost on the road to the Bucs 21-16. They took that bitter taste of defeat into the bye week with them. Down 21-3 midway through the 4th, Geno Smith tried to mount a comeback. He hit Tyler Lockett and then Marquise Goodwin on separate touchdowns to get within 5 but that was as close as they could come. They had just 39 rushing yards and were an atrocious 1 of 9 on 3rd downs.

Seattle and Geno Smith have been a great story for the 1st half of the season. The Raiders have been just the opposite. This week, we believe the scripts are going to be flipped. The Raiders now know what it takes to win against a strong defense after defeating a good Broncos defense. Seattle may still be feeling the hangover from their loss previous to the bye.

The 5-5 Chargers are in a weary place right now. They are on the inside looking out of the playoff picture but there are 5 teams just 2 games out from them. A position they had not expected to be in at this point. They got Keenan Allen and Mike Williams back last week when they faced the Chiefs, but they were not enough. After Justin Herbert hit Joshua Palmer for the go-ahead score with just under 2 minutes left, it became “Mahomes time”, and the Chiefs won it 30-27 on the 3rd touchdown grab by Travis Kelce.

As rough a start as the Chargers have had, the Cardinals have had an even worse one. At 4-7 on the year, the Cardinals need to string together a handful of wins in order to make the post season. They have lost 3 of their last 4 with their last one coming at home to the 49ers. The Cardinals turned the ball over twice to the Niners 0 and allowed Jimmy G to throw for 4 touchdowns. Two went to Kittle while the other 2 went to Aiyuk. Dortch and Hopkins combined for 18 catches and 194 yards but neither found the endzone in the loss.

Arizona is in shambles and this Chargers team, while losing last week, look like they have their offense heading in the right direction. Herbert is an MVP candidate when he has all of his weapons healthy and that looks to be the case this week. Chargers make a statement road win here in Arizona.