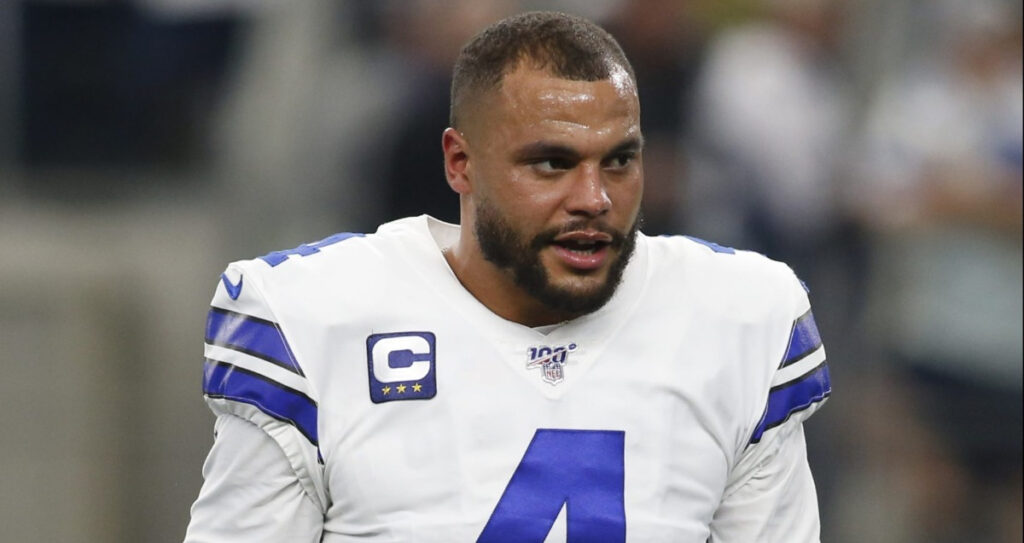 Dak Prescott is a key piece of our DFS lineup for NFL Week 11.

Last week’s lineup included some great value players like CeeDee Lamb ($7,600) and Tony Pollard ($7,000) but was ultimately let down by an injury to Jerry Jeudy and poor performances from our receivers and tight end. Our three starting receivers, with Lamb in the flex, and tight end combined for 14.9 points.

There’s no way to make money with picks like that. Our lineup still cracked 120 points in Week 10 thanks to big performances from Lamb, Pollard, and Pat Mahomes.

Jacksonville, Miami, Seattle, and Tampa Bay players will be missing from DFS lineups while those teams are on a bye this week. We’ve combed through the players available in FanDuel’s main Sunday contest and present our lineup for Week 11 here.

Prescott led the Cowboys into Lambeau against a Packers' defense allowing 170 passing yards per game and threw for 265 yards and three touchdowns in an overtime loss. That included 46 total pass attempts and two interceptions, but overall we liked the volume of his opportunities and total performance against a tough secondary.

Dallas will face a Vikings’ defense that’s allowed 250+ passing yards in the majority of their games in 2022. Prescott has a high fantasy floor in this road matchup.

Call these picks square, but getting two running backs in our Week 11 lineup who combined for 50 carries in their most recent appearances is too much to pass up. Washington ran Robinson into the teeth of the Eagles’ defense 26 times on Monday night, and we would expect them to continue to lean on their impressive rookie against a soft Houston run defense.

Drake carried the ball 24 times during Baltimore’s Week 9 victory in New Orleans, racking up 93 yards and two touchdowns. He likely won’t get that level of volume in Week 11, but even half that is worth this price tag in a Baltimore offense that may miss Mark Andrews again.

Lamb has been in sync with Prescott since the quarterback returned from injury, accruing 22 targets, 16 catches, 227 yards, and three touchdowns in two games. He’ll be a big reason for Dallas’ success if they play as expected against Minnesota.

Higgins returns from the Bengals’ bye week as the #1 target in a JaMarr Chase-less Cincinnati offense. They get a soft matchup with Pittsburgh, and Higgins has seen 7+ targets in six of their last seven games in 2022.

With Cooper Kupp’s injury, Skowronek is worth taking a flyer on within a Rams offense predicated on short routes and quick throws. He becomes the top underneath option for whoever is playing quarterback in LA entering a Week 11 date with New Orleans.

Like Skowronek, Higbee should see more opportunities in the absence of Kupp. He was a safety net kind of player for Matthew Stafford earlier in 2022 as he racked up 48 targets in the first five weeks.

He’s cooled off through the middle of November but saw his most targets (8) since October 9 in the Rams’ loss to Arizona last week with John Wolford playing quarterback.

Pierce has a tough matchup against a defensive line for the Commanders that has given Minnesota and Philadelphia problems over the last two weeks. His volume of carries has held steady at 20 per game since late September, and with Washington leading the league in defensive pass interference calls there could be more goal-line opportunities than usual for Pierce.

In contrast with Pierce’s selection for this lineup, Washington has been extremely impressive in their pass rush and ability to make opposing offenses uncomfortable of late. Houston allows more than 2.5 sacks per game and has committed multiple turnovers in each of their last two games.