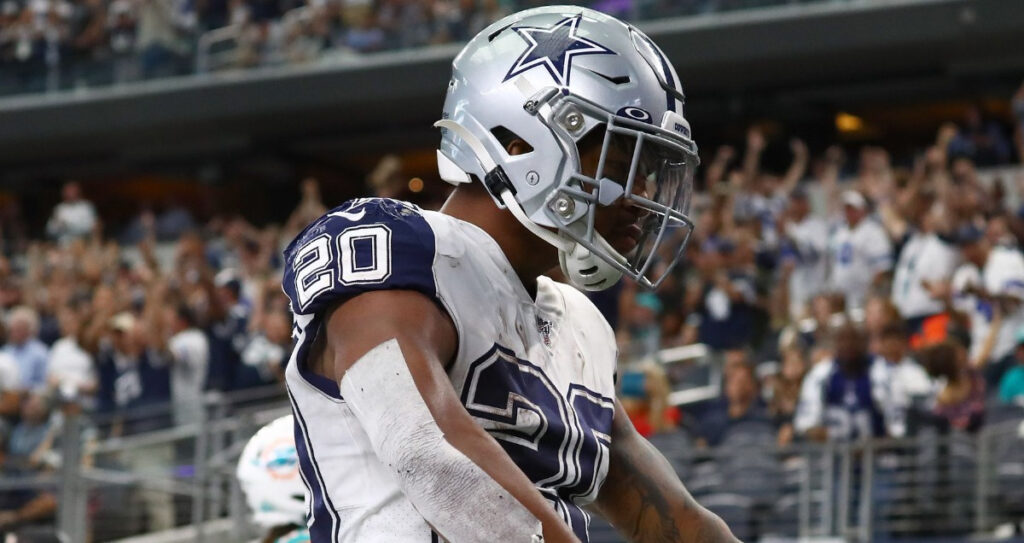 We expect Tony Pollard to run wild against a suspect Green Bay rush defense in Week 10.

After collecting our winnings in Week 8, our lineup came crashing back down to Earth in Week 9 while not managing to cross the 80-point threshold. Aaron Jones, Terry McLaurin, Amon-Ra St. Brown, Evan Engram, and Tyler Boyd all failed to score double-digit points and our lineup was doomed right from the 1 pm hour.

At least the front-loaded NFL Sundays didn’t leave us waiting to realize our fate. As the NFL season turns the page into Week 10, we will regroup and re-enter FanDuel’s $1.4M NFL Sunday Million for this crop of day games.

Mahomes leads the NFL in passing yards and touchdowns despite Kansas City playing one less game than those teams who haven’t had their bye week to this point. He just had 68 pass attempts against Tennessee, and gets another matchup against a Jaguars team with a stingy run defense but is vulnerable to the passing attack.

We aim for a fourth 25-point fantasy performance in his last five games from Mahomes. The steep price tag doesn't bother us one bit!

Williams carried the ball a season-high 24 times in Detroit’s win against Green Bay last week while D’Andre Swift is still not healthy enough to shoulder the majority of their backfield work. That should continue against a Bears’ defense allowing just shy of 150 yards rushing per game.

Pollard and the Cowboys return after their Week 9 bye to face Green Bay’s defense that ranks in the bottom 10 of the NFL in rushing yards and yards per carry allowed. In Week 8, Pollard turned 15 touches against Chicago into 147 total yards and three rushing touchdowns while Zeke Elliott was sidelined.

Elliott may miss Dallas’ Week 10 game as well, and Pollard has asserted himself as a player that needs to have the ball on a regular basis regardless of Zeke’s status.

Lazard played through a shoulder injury Sunday and still hauled in four catches on 10 targets for 87 yards and his fifth touchdown of the season. Dallas is top-5 in the league in pass defense this season, but Lazard is Rodgers’ main option with Romeo Doubs suffering a high-ankle sprain in Week 9.

Jeudy found a solid connection with Russell Wilson in October and finished with 319 yards and two touchdowns in the Broncos’ five games during that month. Jeudy will go against a Titans’ secondary that allows 275 passing yards and just under 2 passing touchdowns per game.

Darnell Mooney has quietly made up for his surprisingly slow start to this season and has averaged 4.7 catches and 63 yards per game in Chicago’s last six. He caught his first touchdown of the season in Week 9 against Miami and has an enticing matchup with Detroit’s near league-worst defense this Sunday.

A lineup with two Broncos’ pass catchers has not been an effective choice for most of this season, but Dulcich is worth the exception. Since making his debut in Week 6, he’s averaged 10 fantasy points per game which ranked fourth among tight ends during that span.

As we mentioned during Jeudy's write-up, Tennessee is a friendly matchup for opposing pass-catchers and Dulcich is among the best that Denver has.

Lamb is another player in this lineup who is returning from a bye week and we look to his Week 8 performance against Chicago as a strong indicator of what is to come for him and quarterback Dak Prescott.

Lamb posted his best game in four weeks during Prescott’s Week 8 return after missing significant time due to injury. The former Oklahoma star will be the top target for a Cowboys’ team that got an extra week of rest and preparation before Week 10’s tussle with Green Bay.

The Giants have been a defensive unit that hasn’t sunk DFS lineups this season and had one standout week against Chicago in early October. New York gets a matchup with a Houston team that is scoring less than 17 points per game this season while the Giants themselves are 11th in opponent scoring average in 2022.

We’re projecting them to score somewhere between 4-8 fantasy points in a low-scoring matchup where the point total is set at 39.5. Let's roll with the G-Men!