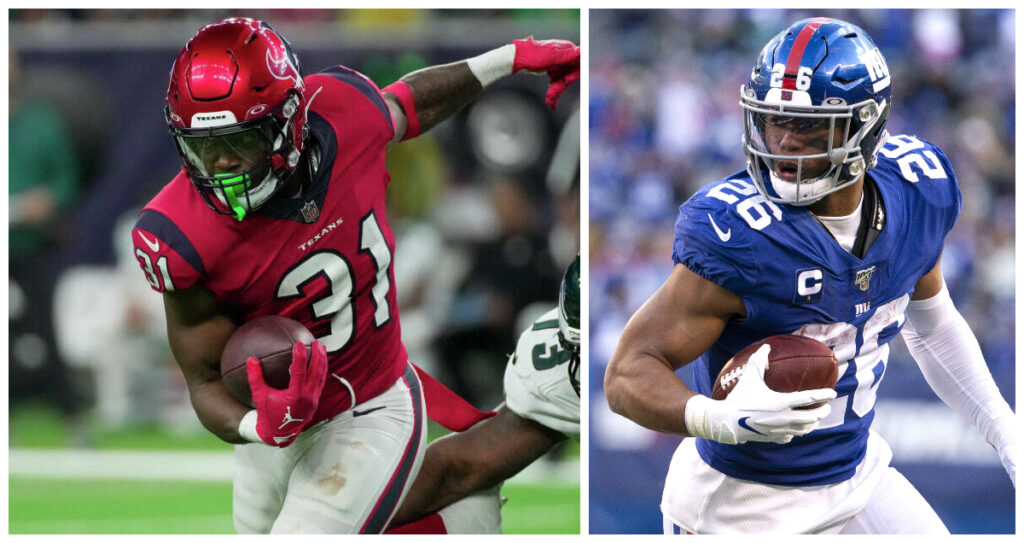 We are thinking that both Dameon Pierce and Saquon Barkley will help our Over in the Texans vs. Giants Week 10 matchup.

In an NFL season where scoring continues to be lower than in previous years, the under bettors reigned supreme once again in Week 9 as they cashed in 9 of the 13 games played. With yet another winning week, NFL unders have a record of 78-57-1 for the 2022 season. This trend continued for underdogs as well, with eight teams covering the spread as underdogs to extend their season-long ATS record to 74-58-4.

Last week’s NFL Best Bets finished 2-1 for the second week in a row, continuing to pull our season-long record away from the .500 mark. Through 9 weeks our record stands at 16-14 or just over 53%.

The Colts and Patriots played to a score of 26-3 and finished comfortably under the point total of 39.5. The Jacksonville Jaguars won outright as 1.5-point underdogs against Las Vegas after trailing 17-0 in the second quarter. Our under play in Chicago never had a prayer, with the Dolphins and Bears combining to score 77 points in a close Miami victory.

It’s hard to believe we’re already entering Week 10 of the 2022 NFL season, and we look to string together another winning week with this group of best bets. Best of luck!

There have not been many over plays in our 2022 best bets, and for good reason when you review the results above. It makes perfect sense that we change that trend with a matchup of teams that have scored 37 combined points per game this season and whose offensive schemes are built around the run game. New York and Houston both rank in the bottom 10 of the NFL in pass attempts through nine weeks.

On the other side of the ball, both teams allow 5.5 yards per carry to opponents. That mark only slightly bests the LA Chargers for worst in the NFL.

We will be battling a running clock in this one, but the effectiveness of both teams’ ground games will mean that fewer drives stall before they enter scoring territory to go over this low total.

Not one, but two over bets in this week's column mark a stark divergence from the first nine weeks. The logic? If the Rams' offense is going to score any kind of points this season, it may as well be on their home field against a team that's allowed a league-high 241 points through nine games.

Arizona is in the bottom six of the league in terms of total points, yards, and yards per play allowed in 2022. On offense, they’ve run the most plays and average the most plays run per game in the NFL.

The Rams are 3-point home favorites, and we predict a turnaround in performance where both teams reach 20+ points in Week 10. This is a solid spot for the Over!

Tampa Bay has been shuffling for weeks, losing to teams like Pittsburgh and Carolina recently before beating the Rams last week to stop a three-game skid. Seattle is one of the darlings of the NFL season, with Geno Smith’s revival as a starting quarterback propelling the Seahawks to a 6-3 start and a 1.5-game lead in the NFC West.

Tampa’s offensive line has been improving in health and performance recently, with the main concern for the Bucs being their league-leading 19 dropped passes. With Tom Brady at the helm, we expect that to correct itself over the course of the season.

The Seahawks' run game should travel well, but Brady and company will do just enough to cover a short spread. We'll lay the small number over in Germany!