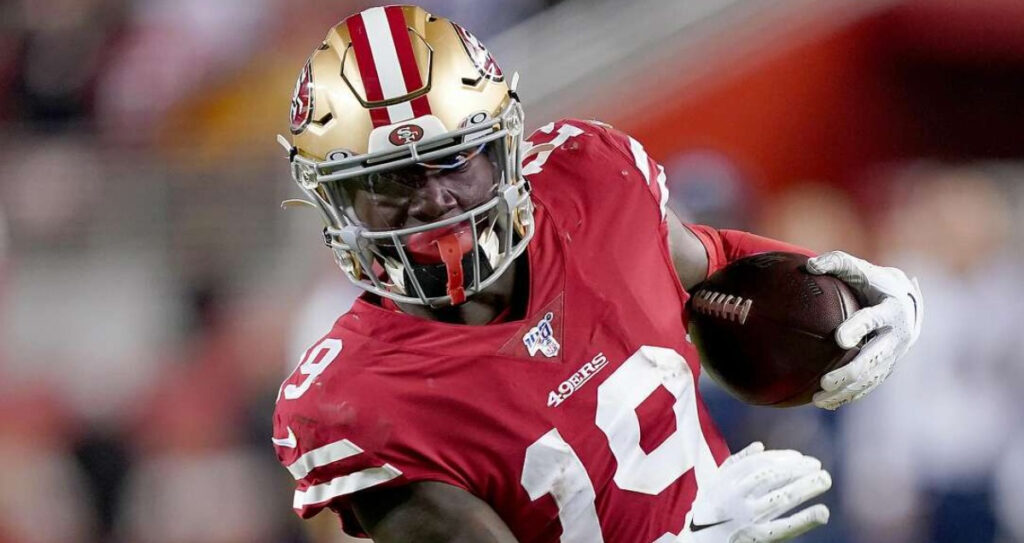 Deebo Samuel could be a key piece of the 49ers Super Bowl hopes. Find out what NFL Playoffs Futures we're playing below.

Futures bets are a great way to diversify your sports betting portfolio. One of the best things about futures betting is that you typically don't have to risk a whole lot of capital to get a giant return. Plus, betting on futures can give you some skin in the game without having to carefully study each and every matchup.

How are you betting on the NFL Playoffs? Check out the 6 investments we're making. We've included a best bet and longshot for who will win the AFC, NFC, and Super Bowl. Best of luck, and let's make some money during this playoff run!

The Bengals are running on an 8-game winning streak and are arguably the hottest team in the league. They know what it takes to get to the big game and have all the pieces back in place to make that run.

Burrow is beginning to solidify himself as the new generation’s top signal caller, and another run here would add to his growing legacy. You can rest assured that nobody wants to play these guys.

We took the Chargers preseason to win the AFC at +750 as our best bet, and we like the extended odds we are getting here. While the loss to the lowly Broncos is what happened to these Chargers in the regular season finale, we still believe the Chargers have enough to sneak into the AFC title game.

If the Bolts can make it that far, anything is possible with an offense like this one. Justin Herbert has a fully healthy Keenan Allen, and Gerald Everett has risen to an above-average tight end. Also, don't forget about how dangerous Austin Ekeler is catching passes out of the backfield.

The Niners were our best longshot bet to win the NFC at the beginning of the season. We grabbed them at +750 and still believe the 2:1 odds are still worth the play here as they seem to be the most complete team in the tournament.

The Niners are on their 3rd string QB, but that has not seemed to matter. That's mainly because their defense is flat-out nasty and arguably the best in the entire league.

The season has been erratic, to say the least, for the Bucs faithful. However, they still have the all-time winningest QB to ever play the game, and he finally has a healthy receiving core.

The defense has been strong against the pass but has allowed teams to get the best of them on the ground. If they can keep games to 1 possession and give the GOAT a chance late, they can win against any team in these playoffs.

When it comes to picking a Super Bowl champion, we always lean toward the team with the better defense. We believe the Niners have the best defense in the league.

Also, with the addition of McCaffery, the offense is now a legitimate threat on each possession. Lastly, don’t forget Deebo Samuel is back and could make this offense even more dangerous. How cool would it be to see Brock Purdy bring home a Super Bowl title? That would be a blockbuster movie in the making!

If the Bengals are to make the Super Bowl once again, they have the tools, knowledge, and experience to finish the job this time. The offense is one of the most explosive in the league, and the defense has been strong enough to keep most opposing offenses right around their season averages.

Cincy proved last year that they had the ability to get hot at the right time. We don't mind having a little bit of Bengals money in our pocket, especially with a proven winner like Joe Burrow at the helm.