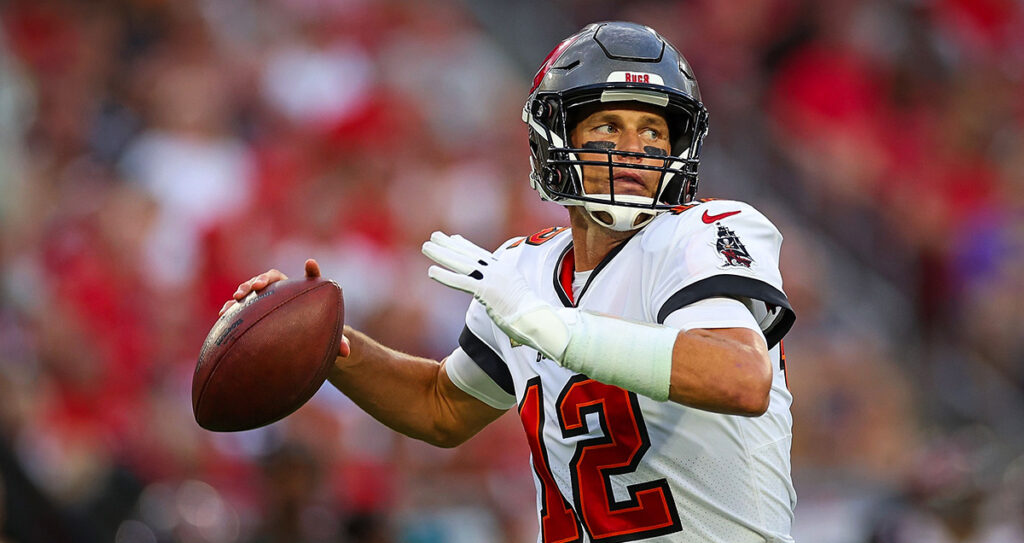 Look for Tom Brady to continue his improved play and go over his TD prop in week 12.

As the NFL wraps up its middle third of the season, Week 12 presents an opportunity to pick from a schedule that includes no teams on a bye week for the first time since early October.

Our Week 11 plays finished one Tyler Higbee reception away from a perfect 4-0 with both Miles Sanders and Saquon Barkley staying under their rushing yard totals and Zach Wilson not throwing an interception against New England. Higbee only caught four of his eight targets to finish just shy of his receptions total against New Orleans.

Week 12 features a full slate of games outside of the three on Thanksgiving and we’ve come prepared with this week’s batch of player prop best bets.

Cleveland’s defense ranks 30th in the NFL in opponent scoring average this season and has given up 70 combined points over their last two games. Most of that damage has been given up on the ground as the team has allowed more than 135 yards per game to opposing rushers, 9th-most in the league.

As we’ve documented throughout this season, the Tampa offense does not prioritize running the football. They have scored four rushing touchdowns in ten games this season, tied for worst in the NFL. Brady just broke his streak of consecutive games without multiple passing TDs last week, and the Browns have the 10th-worst passing touchdown allowance rate in 2022. We project Brady to start a new streak of games with 2+ touchdown passes with his second straight game coming against Cleveland on Sunday.

Ekeler saw his highest rushing volume of the season in the Chargers' Week 11 loss to the Chiefs on Sunday Night Football. He ran 19 times for 83 yards against one of the league's top rushing attacks and added his fourth rushing touchdown in LA’s last five games.

Ekeler and the Chargers face Arizona in Week 12 who have allowed more than 125 rushing yards per game to opponents in their last three. We like Ekeler to crack the half-century mark again in Arizona.

Dotson has quietly returned to the lineup from an injury that kept him out for five games in October and November. The quarterback change from Carson Wentz to Taylor Heinicke seems to have impacted his looks in the passing game, and Dotson’s managed just two catches on three targets for 27 yards in two games with Heinicke.

We expect more of the same against Atlanta’s passing defense which ranks 29th in the league in yards per game allowed through the air but has held teams to less than 160 passing yards per game in their last three.

It’s been a rough few weeks for Patterson, who’s missed three of his last six kick attempts including two from less than 50 yards. He’s been given a vote of confidence by coach Doug Peterson and the team to continue to handle the kicking duties and the Jaguars face a Baltimore defense that’s holding teams to a RedZone touchdown scoring rate of 25% in their last three games.

Patterson will bounce back after a bye week and see multiple opportunities to get on track against the Ravens in Week 12.