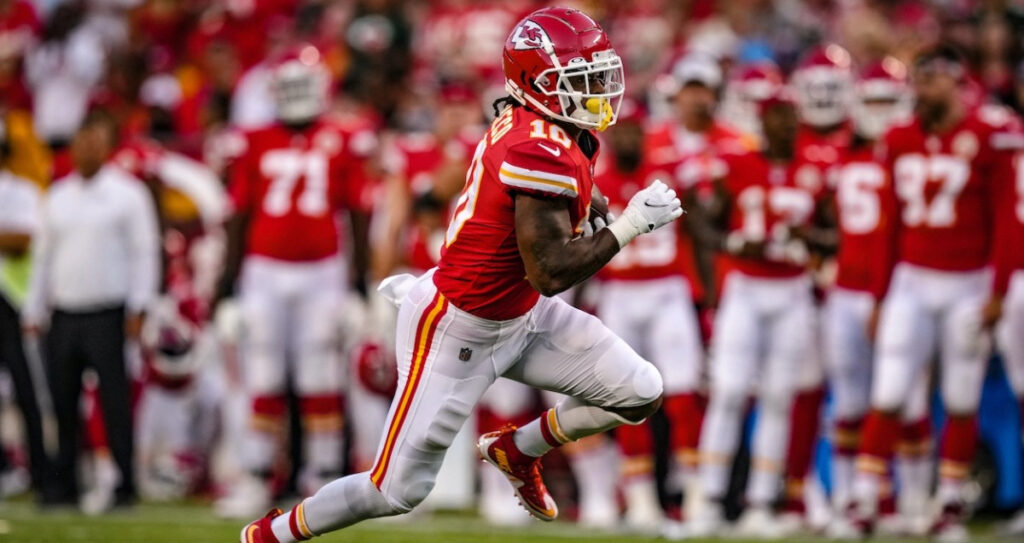 We like Isiah Pacheco as our sleeper pick for the FanDuel Saturday Million.

After a blowout and a historic comeback during the Saturday games of Wild Card weekend, the Divisional round of the playoffs features both 1-seeds in the AFC and NFC as favorites of more than a touchdown.

The Kansas City Chiefs kick off the action against Jacksonville in the afternoon window as 8.5-point favorites, followed by a third matchup between the Giants and Eagles from Philadelphia for the night game. The Eagles are 7.5-point favorites after beating the Giants in both of their regular season tilts this season.

Our DFS lineup for the Wild Card round started extremely well, with Brock Purdy’s four-touchdown game and Ken Walker exceeding expectations against the 49ers’ defense. The slow days from Keenan Allen, Josh Palmer, and George Kittle ultimately derailed our chances of finishing in the money. We look to rebound for the second round of the postseason with our lineup submission for the FanDuel Saturday NFL Million Contest.

Lawrence cracked the 20-point mark in the Jags’ regular season loss to the Chiefs and showed some serious focus for a young player in last Saturday’s comeback win against LA.

His four first-half interceptions turned into four second-half touchdowns as Jacksonville now carries some momentum into this next round against KC.

We like Lawrence at this value to outperform his salary band and score 20+ fantasy points against the Chiefs for the second time this season. Garbage time points may be the way we get there, and that’s ok with us.

Sanders ended the season fifth in rushing yards and eighth in rushing touchdowns during a breakout season for the former Nittany Lion. His workload decreased as the season wound to a close.

That said, we like him to see 15-17 carries after a week of rest before this game against a familiar opponent. Sanders ran for 144 yards and two touchdowns in Philly’s earliest matchup with New York this season.

Pacheco is the thunder to Jerick McKinnon’s lightning in this Chiefs’ offense. We expect him to see a healthy dose of carries as the running game becomes paramount to Kansas City’s success with tougher defenses ahead. We predict that Pacheco punches one into the end zone in this game, along with seeing 12-18 carries.

Smith has been on a tear over the last six weeks that includes 39 catches, 587 receiving yards, and four touchdowns, including a five-catch, 64-yard performance at MetLife Stadium with a touchdown. Smith has scored double-digit fantasy points every week during that stretch and will capitalize on another matchup with this Giants secondary that he’s proven he can beat.

Juju Smith-Schuster ended the regular season with seven catches and less than 100 yards combined in the final three games after a pair of 10+ catch games to begin December. He’s probably the biggest gamble in this lineup at this cap number, but we’ll roll the dice on Smith-Schuster’s playoff experience in his first postseason action as a Chief.

James Jr. emerged as a reliable weekly DFS option with 38 targets during the final five weeks of the regular season. He snagged seven balls for 61 yards and a touchdown during the Giants’ game against Philadelphia in early December and has three games of 13+ fantasy points over his last five.

Goedert had his best game since returning from injury two weeks ago in the Eagles’ victory against the Giants that locked up the top seed in the NFC.

His targets have increased weekly since a December 24 return, and we view him as Jalen Hurts’ third-down conversion weapon who will also be dangerous in the red zone.

We project Goedert to see at least 6-8 targets and cross into double-digit points for the first time since November 3.

As hot as DeVonta Smith has been, he still has work to do to keep up with Brown. The NFL’s fifth-leading receiver in 2022 averaged 110 yards per game in the final six weeks of the regular season and hauled in four touchdowns of his own during that time.

Brown rounds out the final Eagle in this lineup and has not scored less than 10 fantasy points in a game since November 20. He's worth the extra money this week.

Kansas City allowed 17 points against the Jags in mid-November while racking up five sacks in their 10-point victory. Jacksonville’s slow start against the Chargers last week would present an extremely different challenge should they repeat that first-half performance this Saturday.

We like the pressure of the Chiefs' defense, which logged 55 sacks this season, to provide a stable floor at this spot, even if Jacksonville can have success on the scoreboard.