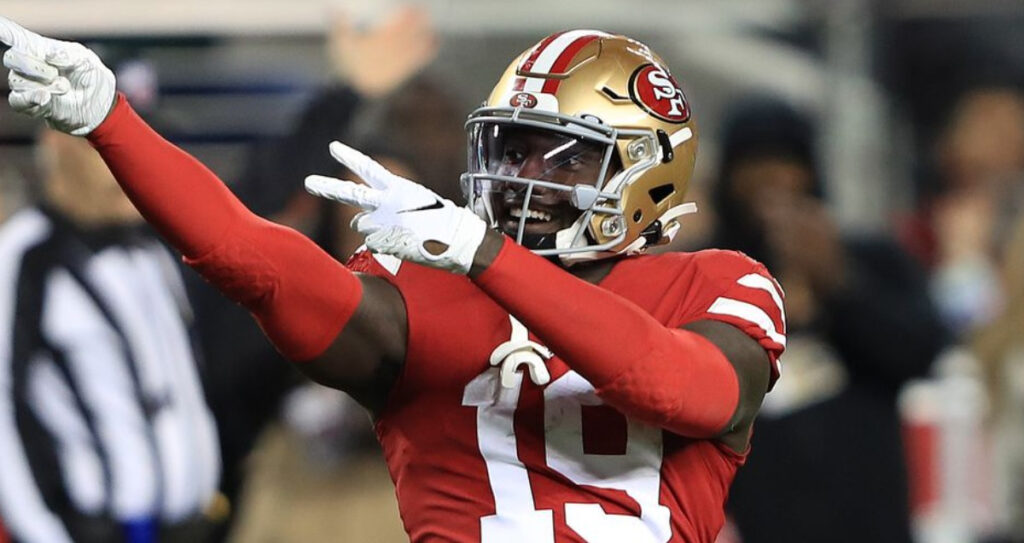 Even against a stout Philly pass defense, we're expecting a big game from Deebo Samuel.

The final Sunday of the NFL season with more than one game on the schedule has arrived. Of the four teams remaining in the postseason bracket, only the Eagles were not in this position last season. Philadelphia will host San Francisco after a convincing win against the Giants on the same field last Saturday and are 2.5-point favorites for Sunday’s early kickoff time.

The Bengals and Chiefs will follow from Arrowhead Stadium, with Kansas City listed as 1.5-point home underdogs against Cincinnati. The high ankle sprain suffered by Patrick Mahomes in KC’s victory on Saturday is fresh on the minds of bettors heading into this AFC title game.

FanDuel is offering a $1.2 million pot for their Sunday DFS contest, and we’ll be entering the lineup below for Championship weekend.

You saw the pregame, slo-mo video of Burrow last week, right? There’s no way we can pick against Joe Shiesty in another big game against an opponent he’s beaten on this very field with a chance at going to the Super Bowl on the line.

Burrow hit the 20-point fantasy mark in both playoff games this season, and his offensive line looked as good as it’s been all season against a stingy Buffalo front seven. We’ll ride with Burrow and the Bengals on Sunday night.

This is the same running back duo we trotted out last Saturday, and they combined for 29 carries and 185 rushing yards in their teams’ winning efforts. While neither found the end zone, and Sanders hasn’t scored since December 11, we predict both of these two will hit pay dirt in hard-fought games.

Sanders averaged 13.5 fantasy points per game and scored seven of his 11 rushing TDs at home during the regular season. Pacheco has either scored a touchdown or eclipsed 80 rushing yards in four of his last five home games, including last week. We like those trends to justify the backfield selections in this lineup.

Smith saw 10 targets and scored 15.1 fantasy points in the Eagles’ dominant victory over the Giants. That marked his seventh straight game with double-digit fantasy points during a stretch in which he’s averaged more than 9.5 targets, 6.4 catches, and 92.5 yards per game. The five touchdowns he’s scored in that span shouldn’t be overlooked, either.

Deebo Samuel’s fantasy scoring record has been spotty since Brock Purdy’s been under center and Christian McCaffrey’s addition to the 49ers’ offense. Samuel’s role has been reduced throughout this season, but he’s seen eight or more touches in four of the last five games, and we like him as a trusted, versatile weapon for San Francisco against a secondary that’s been dominant at home.

Higgins is in our lineup once again despite another lackluster performance in the Divisional round. Maybe we’ve hung on too long as Ja’Marr Chase continues to dominate opposing defenses, but we’ll give the receiver who was top-20 in receptions, receiving yards, and touchdowns this season one final shot.

Kittle bounced back from a quiet statistical game against Seattle to post his most catches and yards since December 24 in San Francisco’s gritty win against Dallas.

He’s been Purdy’s favorite target for six weeks and, at this much of a discount compared to Travis Kelce, we see Kittle as a good fit in this lineup.

Goedert assumes the second spot in our double tight end set after catching all five of his targets for 58 yards and a touchdown against the Giants last week.

That score was his first since November 14, and Jalen Hurts may need to rely on the big target more, with AJ Brown impacted by a hip injury in last week’s game. This gives us the confidence boost necessary to play a second tight end in this Sunday’s lineup.

Philadelphia’s defense has scored nine or more fantasy points every week but one since December 4. They’ve generated 6+ sacks in six of their last seven games.

That pressure on the opposing QB makes up for a lack of takeaways and will force mistakes from the rookie 49ers’ quarterback a week after he was chased around by Micah Parsons for four quarters.