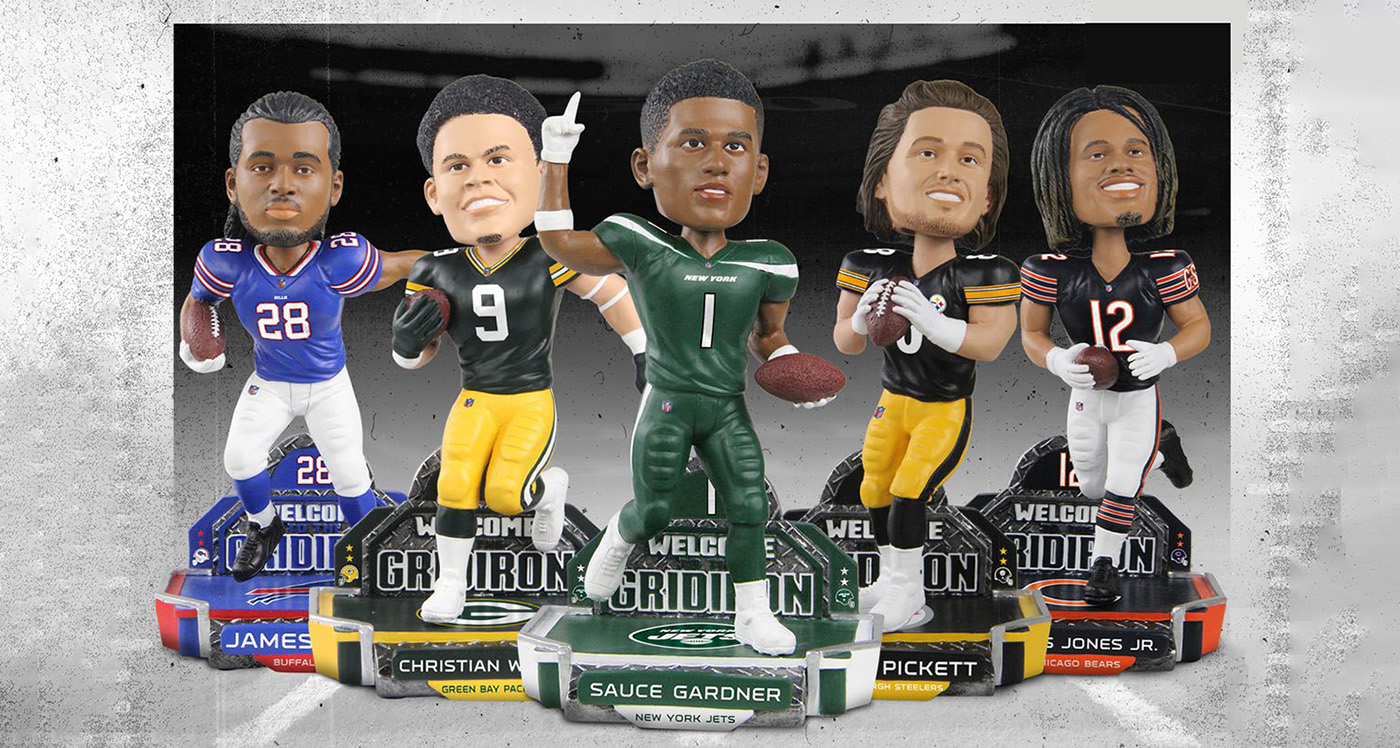 Our Favorite NFL Bobbleheads of 2022

The NFL season is in full swing. That means the weather begins to turn frigid, the games get hotter, and it is time for fans to get their swag on. Whether that means finding the latest and greatest apparel or amplifying your collection with the hottest new bobbleheads, you are covered.

There are no shortage of great players throughout the league. Whether you have a favorite ride or die team or like to collect the league’s best superstars, you can find a litany of great bobbleheads that fit the bill.

There are a few rookies each year that make their presence known quickly. Part of the magical 2021 run to the Super Bowl for the Cincinnati Bengals was due in part to the coming out party for receiver Ja’Marr Chase.

The 5th overall pick in the 2021 NFL Draft, Chase was everything he was advertised to be. He caught 81 passes for 1,455 yards and 13 touchdowns, establishing himself as one of the most dynamic receivers in the game.

This bobblehead features chase in the all-black Bengals alternate uniform, gliding down the field for another score. The NFL logo stands behind him, a large block “B” Bengal logo adorning the front. You will smile as brightly as Chase does on this bobblehead when you get it in hand.

Though he has since moved to South Beach, torching defenses in the AFC East, Hill will forever be a legend in Kansas City. During his years with the franchise, his dynamic playmaking ability helped the Chiefs not only electrify fans, but come away with a Super Bowl title.

In this bobblehead, Hill flashes his pearly whites, throwing up his trademark peace sign as he torches another defender. Hill cheers on the KC faithful with red, yellow, and white pom poms in his hand as he sprints towards the end zone.

The platform features Hill’s name and the Chiefs logo on the front, yellow font on red background. He stands on grass featuring his number while a placard featuring his name and an action shot stands behind him.

America’s Team is known for their quarterbacks and Dak Prescott fits that bill. Prescott became a sensation for the Cowboys, seemingly coming out of nowhere as a late-round pick. Since then, he has established himself as one of the premier quarterbacks not only in the NFC East, but the NFL at large.

In this bobblehead, Prescott smiles brightly as he rolls away from defenders, ready to complete his next accurate strike. He wears the classic white and blue uniform of Dallas Cowboy lore, complete with the trademark silver pants.

The base is simple, featuring the navy blue of the Cowboys around the base, and Prescott striding across the 50-yard-line. Behind him is a graphic featuring the Cowboys logo and name spelled out in the traditional block font that Dallas has made famous.

There are a lot of reasons for Josh Allen to have a big head. He is one of the premier quarterbacks in the NFL and hopes to take the Buffalo Bills to the promised land for the first time. He is also an odds-on favorite to win the NFL MVP, the highest of individual accolades.

But the reason for Allen’s head being big here is because that is the style of the bobblehead. After all, shouldn’t a bobblehead have a cranium that can really bobble? Allen remains smiling brightly as he looks for his next downfield target, rocking the red, white, and blue of Buffalo.

The base might be the coolest part, however. It features Allen’s name in white on a blue background, dueling Buffalo logos on either side. On the base itself is the Buffalo logo again, this time larger, with the red, white and blue striping that can be found on the sleeves running behind it. A great piece to have, especially if Allen makes the leap into becoming the most valuable player in the league for the first time.

Part of what we love about football are the big personalities playing the game. There might be no bigger personality wearing the gold and red of the 49ers than tight end George Kittle. The fact that he is among the best in the game at his position doesn’t hurt his standing, either.

Kittle stands with one fist raised, rocking the classic red and gold uniform of the 49ers. His mouth sits open in a primal yell, letting the opposition know that he is coming. He stands on a beautiful red base featuring his name in white and the 49ers logo standing out magnificently.

Each year, a new crop of rookies enters the league hoping to make their mark. There is little doubt that Pitts, tight end for the Falcons, made his mark during the 2021 season as one of the league’s dynamic weapons.

Pitts, in the sleek all black with bits of red Falcon uniform, runs across the field on the base, which also happens to be adorned with the Falcon logo. Pitts is smiling brightly, probably because he knows he is about to do something that the defense is not going to love.

There is nothing that electrifies the crowd quite like a pass catcher hauling in a big throw. With Chris Olave on the prowl, there is little doubt that some major plays are coming the way of Saints fans in the near future.

Olave sports the all black with gold trim of the Saints here, with a “welcome to the gridiron” plaque behind him. He is striking a pose, no doubt getting ready to haul in a big pass before taking it to the house. Like trading cards, rookie bobbleheads tend to gain value faster than those that release later in their playing careers, making this Olave bobblehead even more intriguing.