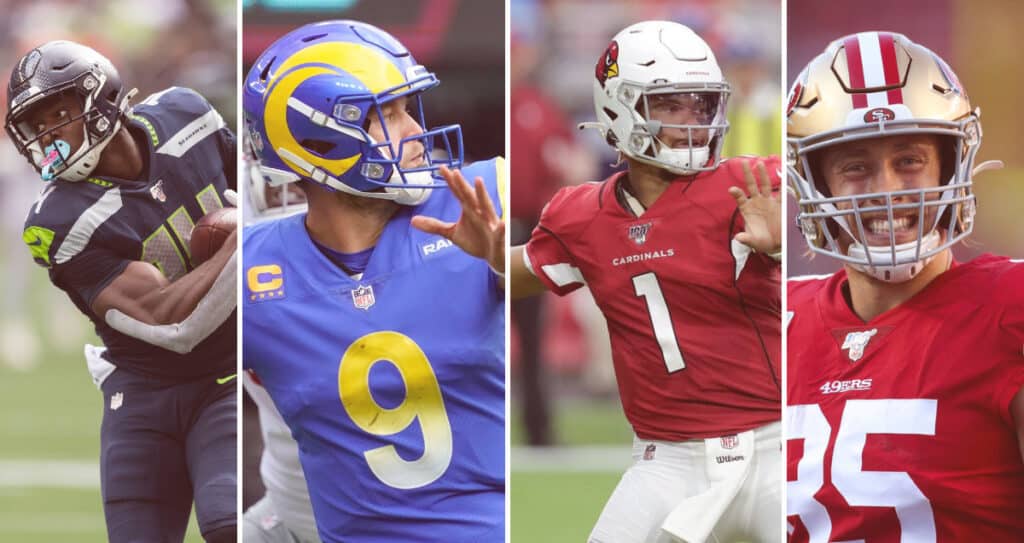 Let us take a look at the division that produced last year’s Super Bowl Champions. The NFC West was loaded with talent last year and sent 3 of their 4 teams to the playoffs. Oddly enough, the Cardinals were knocked out by the Rams and the 49ers shared the same fate in the NFC semi-finals. Will this year’s eventual Super Bowl Champions come from this division once again?

San Fran battled throughout the division to stay above water and get into the playoffs despite their 2-4 divisional record. After a 2-4 start to the 2021 season, the Niners were able to right the ship and win 7 of their last 9 as they headed into the postseason. They were able to handle Dallas and then Green Bay before meeting their demise against a divisional foe and future Super Bowl champion Rams.

The Niners were one of the few teams that avoided significant upheaval during the offseason. The Deebo drama did not play out as many were thinking, and the core of this team is returning along with another year of continuity. The Niners should be primed to make a run and overtake the reigning champions.

What an incredible ride it was in 2021 for the Rams, particularly Matthew Stafford. For a QB to spend his entire career in Detroit with ups and downs and just 3 playoff trips in 13 seasons all ending in losses, Stafford could not have asked for a better 1st season with his new team. Aaron Donald was a large part of what made the team and Stafford successful and good for all, he is back.

However, it has not all been fun during the offseason. Von Miller left for Buffalo and Robert Woods for Tennessee. Both sides of the ball took a bit of a hit and it will remain to be seen how McVay will adjust to these losses and the hype/pressure of trying to repeat as champions. The fact that the Rams have arguably the toughest schedule will not do them any favors.

The Cardinals looked primed to make a Super Bowl run after their 7-0 start last season. However, they stumbled to the finish line with a 1-4 record over the last 5 games. They then faced the Rams in the 1st round of the playoffs and were throttled 34-11. Rumors were swirling that Kyler Murray was not buying in completely with the team’s vision and the play backed that up.

Heading into 2022, the Cardinals were dealt an early blow when DeAndre Hopkins tested positive for PEDs and got himself suspended for the 1st 6 games of the season. The front office tried to put a band-aid on the absence of Hopkins by signing Marquise Brown but he is maybe 1/10th of Hopkins. This Cardinals team will need to weather the storm during Hopkins’ suspension but it will not be easy.

Seattle may have taken the biggest step backward this offseason. With their franchise player and MVP-caliber QB Russell Wilson headed to Denver, the Seahawks are looking like a franchise that is in rebuild mode. Yes, they have DK Metcalf who can be one of the top weapons through the air, but with Drew Lock slated to be slinging the ball to him, who knows how well he will be able to perform.

Pete Carroll is not in the prime of his career and it will remain to be seen how well he can coach up Drew Lock and a new-looking offense. Noah Fant could be a help in the aerial attack along with veteran Tyler Lockett and Chris Carson if able to stay healthy, could provide some solid rushing numbers. However, there are way too many question marks with Seattle and we believe it is going to be a very tough year for the 12th man.