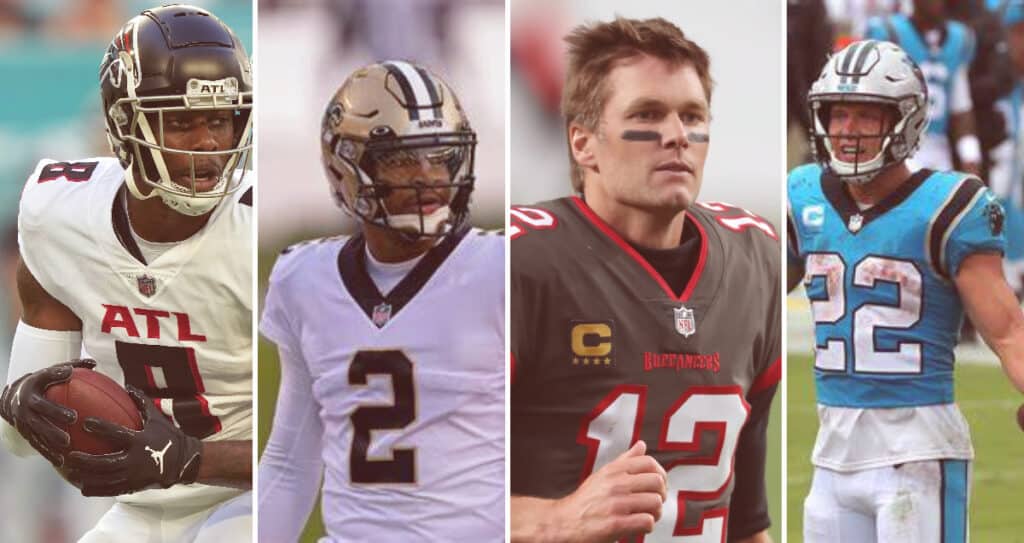 Check out our best bets for all teams in the NFC South division in this betting preview.
By Bill Christy on June 15, 2022

We are creeping ever closer to the start of the 2022 NFL Season and as we do, we will be previewing each division and giving out our best bets for each divisional winner and over/under for each team’s win totals. That being said, we strongly encourage our readers to not follow these futures blindly, nor follow each and every one of them.

So many things happen during the course of just the preseason, let alone the entire season that would totally change the direction of a team and derail a future ticket. So, without further ado, let’s dive into what we believe will be the most intriguing division in the upcoming season. The NFC South has many storylines for this season but before going into each team, let’s take a look at last season’s final standings.

What a whirlwind for Tampa Bay fans during the early portion of the offseason. Brady announced his retirement only to reconsider just weeks later and ultimately decided on returning to play in 2022. He has some unfinished business as the Bucs watched their repeat chances disappear as Matt Gay’s 30-yard field goal ended their season and sent the Rams to the NFC Championship game.

We have Gronk as a key departure, but who knows if he will decide on playing as the season gets closer. Ronald Jones’ departure should be mediated by Gio Bernard’s reemergence but Chris Godwin’s recovery is what could decide the fate of this offense in 2022.

It is damn near impossible to doubt Brady and we believe he is going to get 12 wins this year with the last 2 coming in the final games of the regular season. We expect the Bucs to have no trouble winning the division but the -300 price does not provide any value.

In the 1st season without Drew Brees, the Saints understandably struggled. Winston started the season behind center but had his season cut short by injury. Taysom Hill and Trevor Siemian took over the reins and did a decent job filling in.

They were without all-league WR Michael Thomas all season as well. A record over .500 was rather surprising to most. Now, two years removed from Brees, the Saints are also looking at a new face leading the coaching staff.

Sean Payton decided to retire and Dennis Allen has taken over the head coaching duties. They grabbed Chris Olave from Ohio State, who they believe will be their next Michael Thomas, and signed Jarvis Landry to be the veteran presence of the wideouts. Tyrann Mathieu brings veteran presence as well to the defensive side and should be happy playing in his home state.

Our Best Bet: OVER 8 wins

The Falcons saw first hand how the loss of a staple franchise QB can affect their franchise in what the rival Saints went through last season. This year, it’ll be these Falcons that will look to a new face behind center as Matt Ryan left for Indy and Marcus Mariota was brought in to take over the play-calling. He will be without the top target in Calvin Ridley as he is serving his 1-year suspension for gambling.

2021 wasn’t a complete loss, rookie tight end Kyle Pitts finished with almost 70 receptions and over 1000 yards. He will be leaned upon heavily by Mariota as he navigates his way with his new team this year. Cordarrelle Patterson, the converted RB who has previously been a WR, will need to keep the Falcons from having 2nd and long each drive and has to be a threat in the passing game as well.

Our Best Bet: Over 5

2021 ended up being the 3rd straight season for the Panthers to finish with just 5 wins. Coach Matt Rhule and QB Sam Darnold are both on the hot seat as 2022 begins. Christian McCaffrey has been plagued by injuries during the 1st two years of Rhule’s tenure but that is not an excuse that will save his job during his 3rd year.

McCaffrey will be back but for how long? His running style causes him to take a lot of hits and if he gets sidelined for any stretch of time again this year, it could spell the end for Rhule and others.

Sam Darnold has not taken the next step that Carolina fans were hoping for, but there are rumors that he has had his best offseason yet. Darnold will look to take massive strides in the right direction this season.

Our Best Bet: Under 6 wins