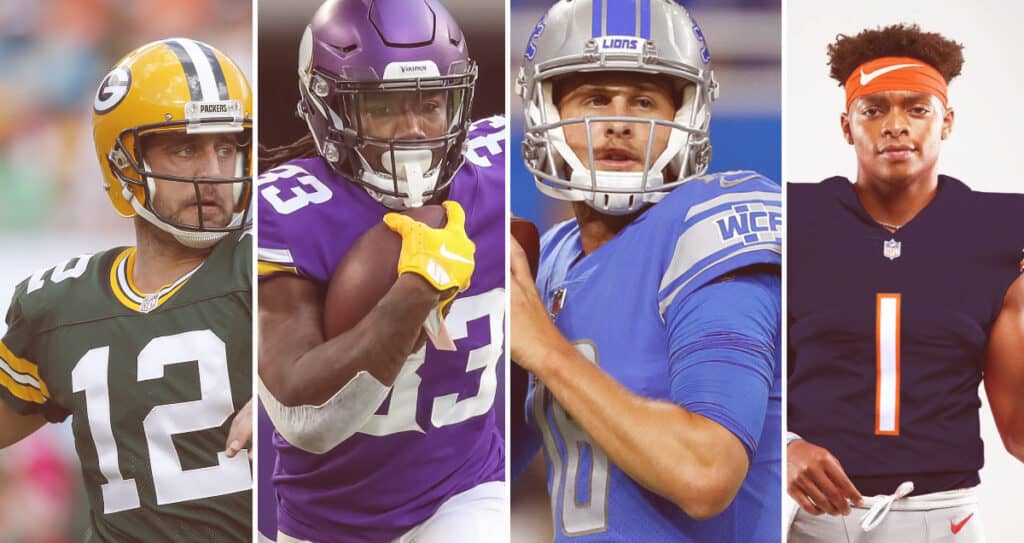 Check out our best bets and team win totals in our NFC North Betting Preview.
By Bill Christy on June 14, 2022

We are creeping ever closer to the start of the 2022 NFL Season and as we do, we will be previewing each division and giving out our best bets for each divisional winner and over/under for each team’s win totals. That being said, we strongly encourage our readers to not follow these futures blindly, nor follow each and every one of them.

So many things happen during the course of just the preseason, let alone the entire season that would totally change the direction of a team and derail a future ticket.
So, without further ado, let’s dive into what we believe will be the most intriguing division in the upcoming season. The NFC North has many storylines for this season but before going into each team, let’s take a look at last season’s final standings.

The 2021 Vikings seemed to be just fine on the offensive side of the ball. Dalvin Cook, when healthy, was his typical bruising self and Justin Jefferson took another step and is in the top tier of wide receivers in the league now. However, the defense struggled throughout the year and led them to an 8-9 record, which caused them to watch the postseason from home last year.

The Vikings looked to sure up the defense with the acquisition of former Packer Za’Darius Smith and drafting Lewis Cine from Georgia and Andrew Booth Jr. from Clemson, who both shined in college. If the defense can find their stride and Cook can stay healthy, this could be the Vikings' division to lose.

The Bears' 2021 season seemed to be more experimental than anything else. They let go of Mitch Trubisky and signed Andy Dalton while also drafting Justin Fields. This was a season removed from making the playoffs and the change has not panned out as of yet. Fields got a decent amount of starts but overall, the Bears were underwhelming.

Coming into 2022, the Bears have even more question marks on the roster with the departure of Khalil Mack and Allen Robinson. Both sides of the ball took a dip with these departures and coach Matt Eberflus will have his hands full in a tough division and a young roster.

Not many teams would consider a 3-win season a step in the right direction, but the Lions certainly viewed it that way. Not only did they win 3, they lost another 6 games by a total of just 16 points and they also tied once.

If a couple of things change in those games and this Lions team could have been a 10-win team! Well, maybe not but at least 1 or 2 more wins were possible.

The emergence of Amon-Ra St. Brown, who grabbed 90 balls for just north of 900 yards and 5 touchdowns, was the biggest bright spot of the team. Him along with a strong draft have the Lions looking like a team with young potential. There may not be a more emotional head coach in the league than Dan Campbell, who I have slated as a dark horse for coach of the year this coming season.

Aaron Rodgers’ name seemed to be in every controversy possible last season and yet, he still remained focused and led the Packers to the #1 seed in the NFC and the best record in the league for which he was named MVP. However, the Packers were unceremoniously sent home early from the postseason at the hands of the 49ers in the 2nd round.

This offseason, Rodgers lost his biggest weapon in Davante Adams to the Raiders and Za’Darius Smith left a void on the defensive side of the ball. It will be extremely tough for the Packers to repeat the type of regular-season success they had last season. Maybe that is a good thing since the regular season did not do them any favors for the playoffs.

Our Best Bet: Under 11 wins