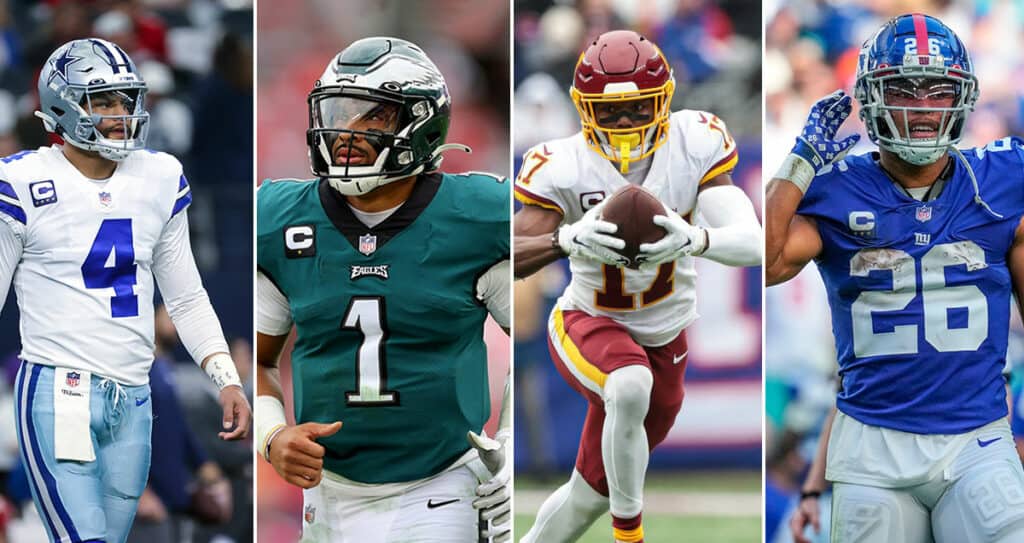 So, without further ado, let’s dive into what we believe will be the most intriguing division in the upcoming season. The NFC East has many storylines for this season but before going into each team, let’s take a look at last season’s final standings.

The Eagles have arguably the most upside than any team in the division, if not the NFC. The addition of AJ Brown on the offensive side of the ball along with the two Georgia rookies on the defensive side (Davis and Dean); this Eagles team should be primed to take some serious strides in 2022.

After an up and down season in 2021, the Eagles made the playoffs and were disposed of rather easily by the Tampa Bay Bucs 31-15. This team is likely to go as far as Jalen Hurts takes them. If Hurts is able to take steps forward this early in his career with the weapons he has at his disposal, this team could contend for the division title.

The Cowboys finished last season 1st in the NFL in points, 2nd in yards per game, 6th in redzone scoring. They were a perfect 6-0 in divisional games and as glaring as those numbers were, it was not enough to even pick up a single playoff victory. Mike McCarthy could very well find himself starting on the hot seat after the fizzling out last season, and with the loss of Cooper and Wilson (113 receptions, 1400+ yds, and 14 TDs), that sit could get hotter by the second.

I don’t believe they are in any position to repeat their regular season performance from last season. However, if McCarthy can use both Tony Pollard and CeeDee Lamb to their full potential this year, the Cowboys could do enough to sneak out a divisional championship again. Overall, they have one of the weaker schedules in the league and should be able to capitalize on that factor to get them over their win total this year.

Our Best Bet Pick: Over 10 Wins

Remember when Washington won seven games, won the division and gave Tampa Bay a real scare in the playoffs? That was in 2020 and not many are aware of that fact. However last year was met with adversity nd then in 2021, Washington missed out on the playoffs. The Commanders will go as far as Carson Wentz can take them, but there's a reason why he's playing on his third team in as many years.

The Commanders have the easiest schedule in the NFL but that won’t mean much when they are turning the ball over and unable to shut down opposing offenses. I don’t see this team getting more than 5 wins this year.

The pick: Under 8 wins

I do not have much faith in Daniel Jones running this offense. That being said, if Saquon can get back to close to his 2019 form and Matt Brieda can stay healthy, and Kenny Golladay can live up to his previous hype; maybe the Giants can have a decent year. But that is unlikely to happen and they should struggle even with the 29th ranked strength of schedule.

Last season, the Giants ranked near the bottom of every offensive and a handful of defensive categories. Things may turn around a bit but they are a long way away from being a Giants team that competes for the division. Their 1-5 record last year in division obviously won’t get the job done and I believe they are headed for a slightly better season but not by much.

Our Best Bet Pick: Under 7 Wins