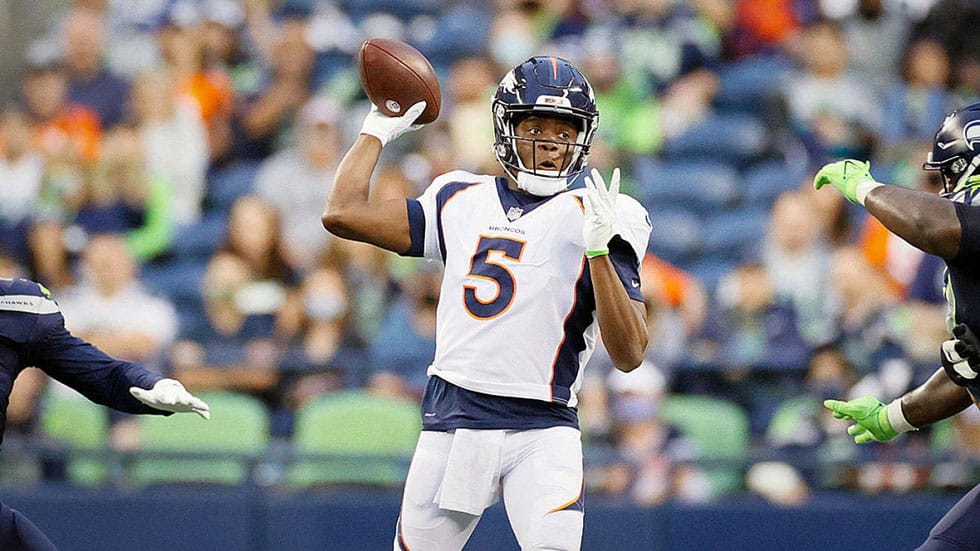 Despite the Broncos and Giants being 28th and 31st in scoring last season, these offenses will have a ton of eyeballs on them here in week 1. Denver brought in Teddy Bridgewater to compete with Drew Lock and he's been more than impressive this preseason, completing 16 of 19 passes for 179 yards and 2 touchdowns.

Bridgewater has plenty of weapons with Jerry Jeudy looking poised to make a big jump in his sophomore season and Courtland Sutton returning from a season-ending injury in 2020.

On the Giants' side, the team gets Saquon Barkley back who should have his way with the Broncos' 29th ranked rushing defense. They also added Kenny Golladay on the outside, a legitimate go-to wide receiver that Daniel Jones has yet to have in his NFL career.

We will share our favorite bet from this matchup, but first, let's take a look at the best odds available for both sides and the total. As a reminder, you can place any week 1 NFL bet with +100 odds at PointsBet.

Every week 1 NFL bet has +100 odds at PointsBet. As an added bonus for new players, get $125 in free bets whether your first $10 bet wins or loses!

Best Odds for Giants vs Broncos

The Giants opened at -1 but after two dominant preseason performances, most US books have the Broncos at -1.5 or -2, with the line at Circa sitting at Broncos -2.5. Clearly, a ton of money has come in on the Broncos early. The total, which was already the lowest for the week, dropped from 43 to 42.5 globally.

Be sure to add our free NFL odds checker to your betting toolkit for the 2021 season. Odds update in real-time, displaying the best line available for each side and total. In the event multiple books offer the best line, we display the book with the lowest juice.

The Denver Broncos are LOADED coming into the 2021 season. Denver's wide receivers ranked dead last in the league with just a 66.7 grade as a unit, but things are certainly looking up. The main reason for last season’s underwhelming performance was the fact that the team’s #1 receiver, Courtland Sutton, was limited to just 31 snaps due to an injury.

In 2019, Sutton averaged 15.4 yards per reception, one of the top marks in the NFL. If he can return to his form from two years ago and Denver’s new offensive weapons can produce as well, the Broncos could have a great season.

Besides a healthy Sutton, we will see Jerry Jeudy return for a second year with Denver. Jeudy was decent in his rookie season and has enormous upside according to projection models. He should also work much better as a number 1b option behind a more experienced star in Sutton than him running the show on his own.

While K.J. Hamler flashed this preseason, we would not sleep on Tim Patrick as the third WR on the squad. Patrick earned an impressive 75.6 receiving grade last year and he caught 67% of his contested targets, which is the seventh-best percentage in the entire league.

The tight end position is also full of talent with Noah Fant leading the way. Fant is the fastest tight end in the league and was grading 80.3 last year, making him the sixth-best TE in the NFL. His backup, Albert Okwuegbunam played only 86 snaps but was graded as the top rookie in his position. Overall, this WR + TE group makes a top-three receiving core in the league.

Besides the elite receiving core, we have to give credit to the Denver run game as well. The Broncos averaged 4.8 yards per carry in 2020, the 4th best mark in the entire league, scoring 22 rushing touchdowns in the process.

What to Expect from the Giants in Week 1

Just like their Week 1 opponents, the New York Giants also made considerable offensive improvements of their own. NY signed Kenny Golladay, who is easily a top ten WR in today's NFL.

Golladay single-handedly carried the Detroit Lions through multiple seasons and is considered one of the better vertical threats in the league. Through his four-year-long career, Golladay caught 53.6% of all of his contested throws, which grades fourth-best through that period.

Golladay will join Darius Slayton, a third-year WR who is averaging a whopping 15.2 yards per reception through his career at just 24 years of age. New York also added Kadarius Toney in the first round of this year's NFL draft. Toney will likely end the season as the WR3 on the team but should be battling with Sterling Shepard for snaps early in the season.

At tight end, the Giants are rolling with back with Evan Engram. Engram had a down year, but he is still an above-average option at TE and the team has added Kyle Rudolph as a backup in free agency as an insurance option. The run game will be going through Saquon Barkley. Barkley was injured for most of 2020 but had one of the more impressive first two years out of any active young RB.

What About the Defenses?

When it comes to their defense, neither team was amazing last year, grading just 13th (Denver) and 19th (New York) in defensive DVOA. New York gave up the 9th-highest pass completion rate in the league, while the Broncos struggled against the rushing attack, surrendering 4.8 yards per carry (4th worst in the league).

We are taking the over in the game between the Giants and the Broncos. Both offenses have improved considerably and with a total of 42.5 (the lowest on the board) you don’t need too much production from either team to win your bet on the over. While neither Teddy Bridgewater nor Daniel Jones is an elite NFL QB, both teams have solid run games and receivers that are capable of getting open and racking up yards.