NBA Player Props: Our 4 Best Bets for Tuesday, May 3 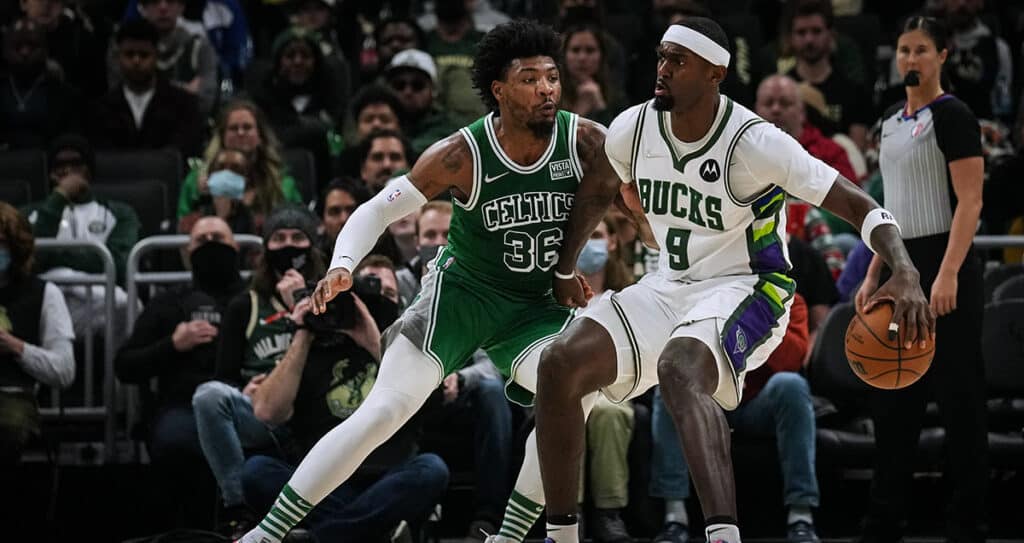 Our staff likes Bobby Portis to top his rebounds + assists prop tonight.
By Nicholas Berault on May 3, 2022

The NBA postseason action continues on Tuesday night with a pair of Game 2 matchups in which the home teams hope to salvage a split before hitting the road. Milwaukee looked in control against Boston in Game 1, with Giannis Antetokounmpo logging his first triple-double of these playoffs and Jrue Holiday leading all scorers with 25 points. Khris Middleton’s injury absence has not slowed down the defending champs.

In the west, Golden State earned a Game 1 victory thanks to an impressive performance from Jordan Poole (31 points) and timely shooting from its superstars, Steph Curry and Klay Thompson. Ja Morant looked as difficult to guard as ever, scoring 34 points and ending one rebound shy of a triple-double, and Jaren Jackson Jr. scored 33 points to pick up the scoring slack from the rest of the Grizzlies starting lineup.

With a lot at stake in both matchups, let’s get into our best player prop bets for tonight.

On any NBA Playoffs game.

Williams played over 22 minutes in the Celtics’ Game 1 loss to Milwaukee, a significant step in his return to the court. For reference, he had played less than 30 minutes combined between his two appearances in Boston’s series win against Brooklyn. This represents the most floor time he’s seen since March 27 when he suffered a torn meniscus in his left knee.

Williams will likely need 20+ minutes again to cash this play. In February and March, Williams played less than 28 minutes in 10 different games. He averaged 8.8 rebounds in those games, and grabbed 8 or more rebounds seven times in that stretch. Williams has proven he can effectively control the glass when given enough opportunities, and in his case that doesn’t even require playing a majority of the game.

Portis has been a monster on the boards this postseason, averaging over 10 rebounds per game through Milwaukee’s first six games. This is more than double his average from the Bucks championship-winning playoff run last season, and has contributed to Milwaukee winning the rebounding battle in each of those six games.

He is not the most effective passer to put it lightly. Most, if not all, of the damage he will do will be from beyond the three-point line and under the basket, but he has at least one assist in four of the six games during the playoffs. That may be all we need to cash this bet tonight if his rebounding form continues.

Draymond Green returns to the lineup fresh off his ejection from Game 1 of the Warriors-Grizzlies series. Even for a guy who plays with a lot of energy and effort already, we think Green takes it to another level tonight. He has 10 steals and 9 blocks in his last 6 games, including three steals and a blocked shot in the first half on Sunday prior to his flagrant foul.

The juice on this pick continues to grow as Morant continues to rebound at an elite level for a guard. We have yet to see the limit on what Morant can do when his team needs him to shoulder the load, whether that be scoring, passing, rebounding, or defending. He seems hellbent on maintaining a triple-double pace to lead the Grizzlies on this run, and we expect that to translate to at least 8 rebounds for the seventh consecutive game.