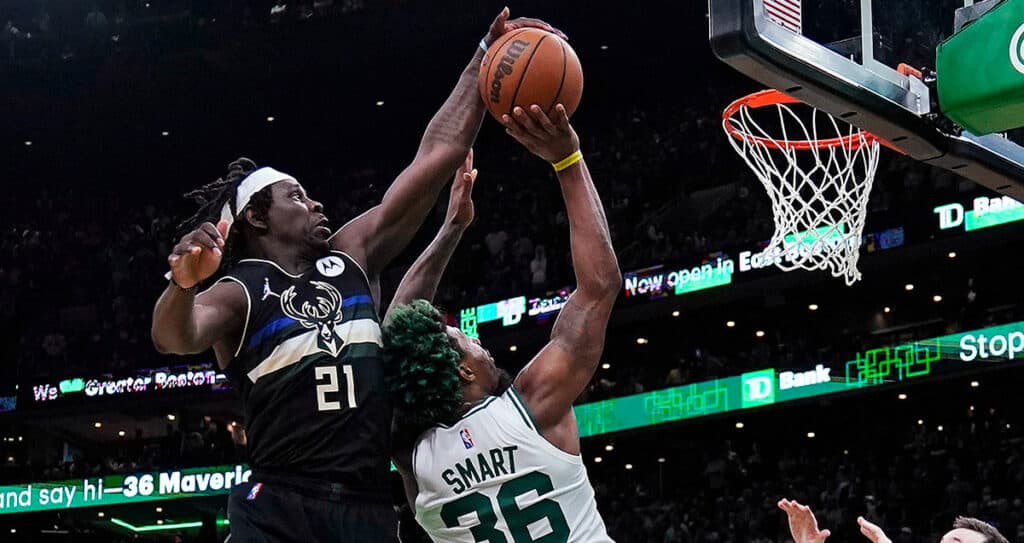 Can Marcus Smart and the Celtics rebound from the disappointing finish to game 5?
By Nicholas Berault on May 13, 2022

A pair of conference semifinal elimination games will be featured on Friday night after both underdogs in these series won outright earlier this week.

For Milwaukee, that means hosting the Boston Celtics with a chance to continue their title defense and extend this playoff run into the conference finals. The Bucks got a big game from Giannis Antetokounmpo in Game 5 as expected, but the late heroics from Jrue Holiday and Bobby Portis helped bury the Celtics on their home floor in the waning seconds. Jayson Tatum made 2-of-11 three-point attempts Wednesday and will need to have a better shooting night for Boston to force a Game 7.

In Memphis, the Grizzlies dominated every facet of the game against the road-favorite Warriors to take a 3-2 series lead on Wednesday. Seven Grizzlies scored in double figures and no one on the team attempted more than 13 field goals in an unexpected blowout of the title favorites. For Golden State, it was a poor shooting night from deep (14-for-39 as a team), and Steph Curry managed just 14 points as part of a Warrior offense that never got going.

That brings us to an exciting Friday night with a pivotal game from each conference that could see both series come to an end. Our best player prop bets for these games are ready for that action.

Bane’s reliance on three-point shooting makes this play more appealing. Despite Ja Morant’s injury leaving plenty of scoring chances on the table for the rest of the team, Bane will need to maintain his strong recent form of shooting to surpass the 20-point mark again. More than half of his made shots in this postseason are three-pointers, including 63% of the shots he’s made in this series against Golden State. We’ll use that trend to our advantage, plan for some regression to his normal three-point shooting rate, and play the under for Bane in this game.

In just over 48 minutes played during the last two games, Adams has hauled in 28 rebounds. This includes the Grizzlies blowout win on Wednesday where he snagged 13 boards in under 22 minutes. Yes, the Warriors had an off night shooting the ball, but that also resulted in less minutes than expected for the Big Kiwi. Adams is operating as the enforcer in the paint to anchor this Memphis team that includes a lot of young, offensive-minded talent. His job is to prevent buckets, grab rebounds, and initiate fast break opportunities. We see that leading to another strong rebounding night for Adams.

Smart came out of the gates hot against the Nets with several strong passing performances, averaging 7 assists per game in that series. Despite that, he’s only collected 7 or more assists in a single game twice in eight games this postseason. In those games that Smart has appeared, the Celtics are scoring 10 less points per game this series against Milwaukee than they did in the conference quarterfinals against Brooklyn. For these reasons, we expect Smart to remain under this assist total again Friday.

Good luck with your prop bets tonight, and be sure to check out our MEM/GSW betting preview for even more picks!