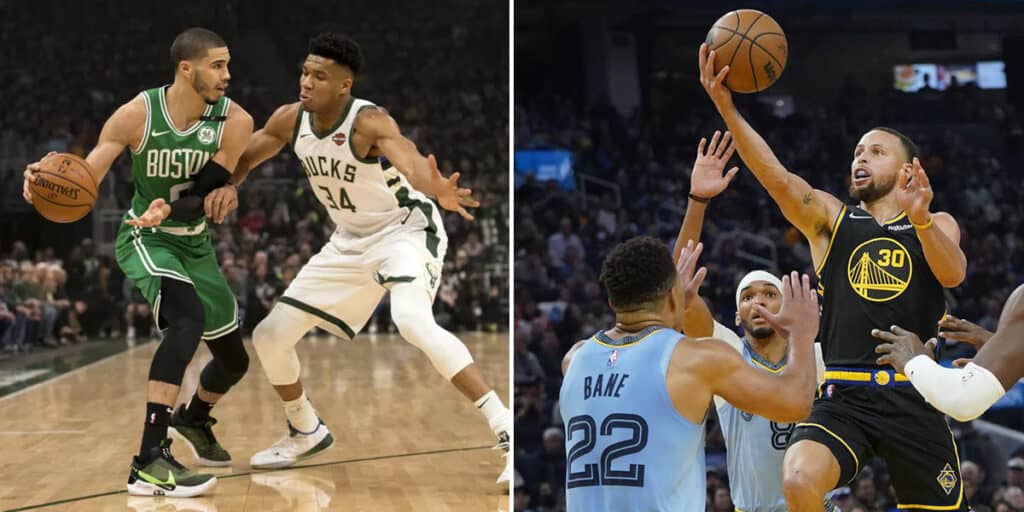 Monday’s slate consists of a TNT double-header tipping off at 7:30 with the 2-seed Celtics looking to even the series. Saturday’s thrilling victory for the Milwaukee Bucks at the buzzer gave them a series lead for the second time this series. The Bucks are 1-point favorites in this game 4 matchup at home, and the over/under is set at 212.

The coverage continues at 10:00 PM ET where the 2-seeded Grizzlies look to bounce back without their star player, Ja Morant, who suffered a knee injury in game 3. The Warriors looked dominant in their 30-point victory at home in game 3. This dominance could continue as the Warriors are -10.5 in game 4 against the shorthanded Memphis Grizzlies.

Here is a look at our favorite player props from the two Monday night NBA Playoff games.

Not only is this a bounce back game for the Celtics, but it is also a bounce back opportunity for Jayson Tatum who had his worst shooting performance in the postseason thus far in game 3. Tatum has gone under his point total 3 times this postseason. The first two times this has happened he has responded in a big way by going over his total both times following a poor performance.

Tatum is attempting a tick under 20 shots per game in the playoffs this year. We do not expect this to change even after a game where he shot a mere 21.1% from the field. Tatum and the Celtics will stay aggressive in a must-win game in Milwaukee.

Giannis is playing at an MVP caliber level this postseason, and he is coming off a dominant 42-12-8 performance where he was two assists shy of his second triple-double of the series. However, Giannis has only gone over his point total in back-to-back games once this postseason and we believe that trend will continue.

The Celtics rise to the 2 seed this year can be attributed to their stellar defensive play. If the Celtics want to even the series at 2 before heading home to Boston, they will need to slow down Giannis significantly and return to the defensive monster they were in the regular season. We expect the Celtics to double-team Giannis, prevent him in the paint for easy buckets, and try to attack him offensively to get him in foul trouble early. Look for Giannis to go under 30.5 points in tonight’s game 4 matchup.

Tyus Jones has had a quiet postseason only averaging 7 points per game during 18 minutes per game. Without Morant, Jones should see a major uptick in minutes tonight which could lead to increased production.

Tyus Jones has averaged 12.7 points per game in 23 games without Morant in the lineup this season. Also, Jones will most likely be guarded by Steph Curry who is not known for being a great defender. Look for Tyus Jones to go over 9.5 points in tonight’s game 4 matchup with Golden State.

Desmond Bane collects about a full rebound more per game without Ja Morant in the lineup. Ja Morant is an amazing rebounder for a guard, and he has shown this throughout the postseason averaging 8 rebounds a game. Without Ja, Bane will see more minutes on the court and have more rebound opportunities. We expect Bane to go over 4.5 rebounds tonight against Golden State.

Both the Mavericks and the Sixers were able to even their series at 2, and we expect the Celtics to follow in their footsteps. In their first bounce-back opportunity of the postseason, the Celtics had a 23-point victory as they dominated the Bucks from the tip. The C’s were a second away from sending game 3 to overtime. They lost by only a bucket with their leading scorer all season in Tatum only scoring 10 points. We expect the Celtics offense to bounce back and be aggressive all game in what feels like a must-win game for Boston.