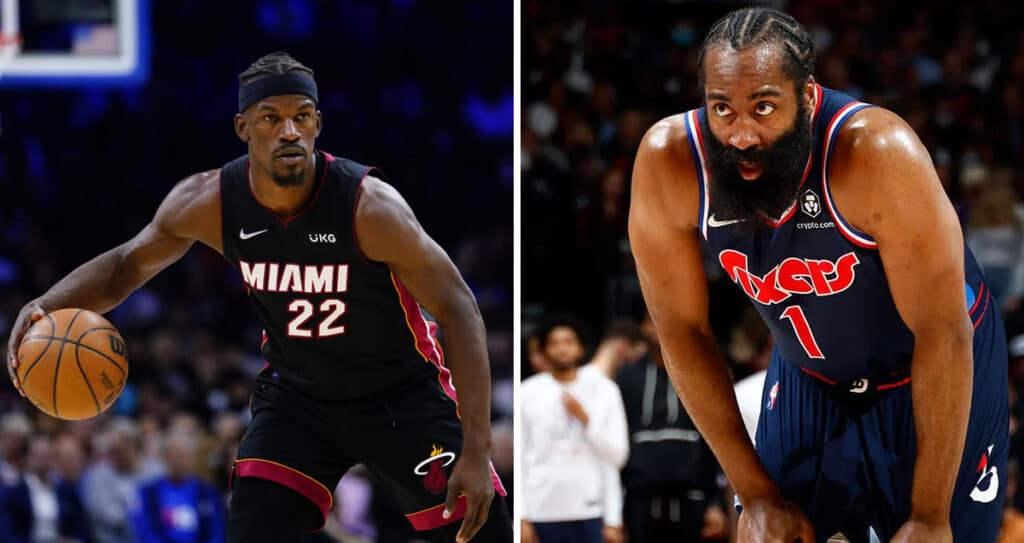 Look for Butler to top his rebounds prop and Harden to top his points prop tonight.
By Kyle Guenthner on May 4, 2022

Wednesday’s slate includes a TNT double header beginning at 7:30 PM ET with Both of the 1-seeds back in action. The Heat, up 1-0 in the series, host the Sixers without Embiid for a second straight game. The Sixers are 8-point underdogs for the second straight game and the total is set at a low 207.5 points.

The 1-seeded Phoenix Suns take on the Mavericks at 10:00 PM ET leading the series 1-0. Devin Booker and the Suns returned to their dominant play as they beat the Mavs 121-114 in game 1 on Monday. The Mavericks visit Phoenix as 6-point underdogs looking to steal one before going home to Dallas for 2 games. We have focused on our 4 best bets and player props for tonight’s NBA slate:

Jimmy Butler has been excellent so far this postseason with averages of 27.4 points, 8 rebounds, and 4.8 assists. The Heat’s leading scorer this postseason has been aggressive on the boards as well in his first six games this postseason. Butler sees a slight uptick in rebounds per game at home in Miami.

Butler has grabbed 9+ rebounds in three straight games this postseason. Without Embiid on the court, we believe Jimmy Butler will be able to dominate the boards on both ends of the floor. Look for Jimmy Butler to collect over 6.5 rebounds in tonight’s matchup.

Get $100 in Free Player Props at Underdog

Use promo code BAR at signup.

We have been on James Harden’s point total under a lot this postseason, but tonight feels like a must win for the Sixers without their top scorer in Embiid. Harden has topped out at 22 points in a game this postseason and his production has been lower than expected. Without Embiid, expect to see Harden shooting the ball a lot more and getting to the free throw line several times tonight.

Harden is yet to have an all-star type of performance, but we believe this changes tonight with aggressive play on the offensive end. Doc Rivers will make adjustments to get Harden better matchups and open looks tonight. We expect Harden to go over his point total tonight and score 25+ points.

Deandre Ayton has been playing a huge role offensively for the Suns as he is scoring 21.1 points per game this postseason. Although his scoring production has increased, he has seen some regression in rebound production per game in the playoffs. Ayton’s rebound average has dropped 0.6 rebounds per game since the regular season.

The Suns rebounding has been very spread out as 6 players had 5 or more rebounds in game one of this series. The Mavericks shoot a lot of 3-point shots, which can lead to long rebounds outside of the paint. Deandre Ayton has gone under 10 rebounds in 4 straight games, and we expect this streak to continue in tonight’s game two matchup with the Mavericks.

Jalen Brunson has had a dream start to the playoffs this year, which the Mavs desperately needed with Luka out the first couple games. Brunson’s production has seen a slight dip with Luka back, but not by much. Brunson is averaging 25.7 points per game this postseason on 47.2% shooting from the field and 35.3% shooting from three.

With Luka scoring 45 points in game 1, we expect the Suns defensive focus to be on stopping Luka from taking over. We believe the court will be opened up for Brunson and with better shooting he will cruise past 18.5 points tonight, which he has done in 6 of the 7 postseason games this season.