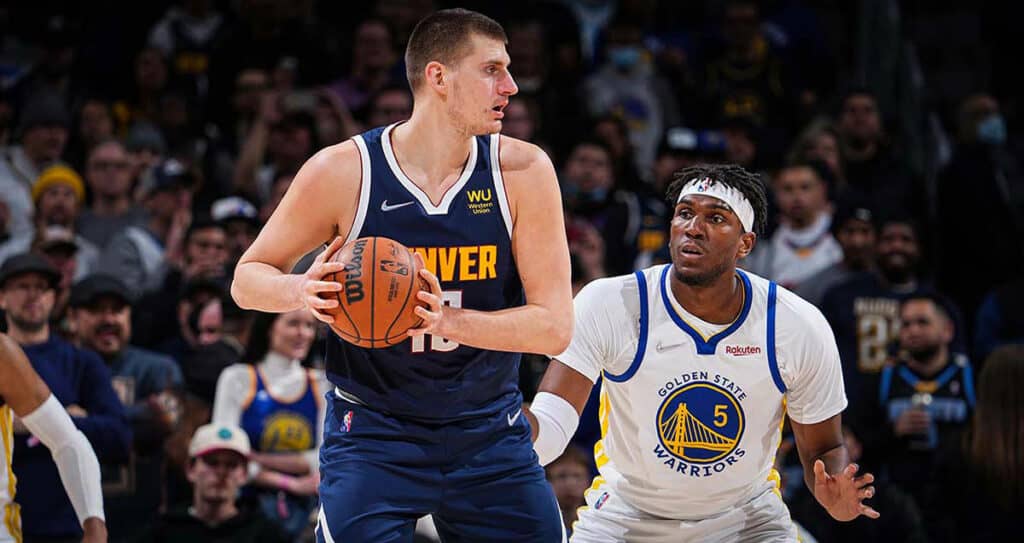 Nikola Jokic rebounds prop is one of our best bets for tonight.
By Kyle Guenthner on April 21, 2022

Thursday night’s NBA Playoff slate includes a TNT double header. The double header begins at 7:30 when the Timberwolves host Memphis in the third game of a tied series. This is followed up by the Golden State Warriors traveling to Denver to take on Jokic and the nuggets at 10PM. The action includes the Mavericks taking on the Jazz in Utah at 9:00 on NBA TV.

Two of the games have tight spreads as the Warriors are -2 against the Nuggets and the Grizzles holding the same line against the Timberwolves. The jazz are a larger favorite against the Mavericks at -7.

There are only three games in action, but there is no shortage of player props on the board. We have gone through the full slate and narrowed our list down to our 4 best picks for Thursday night. Combine our prop picks with a your favorites to take a few shots at tonight's 20x offer from PrizePicks.

The Timberwolves look to take a series lead tonight for the second time this series. For that to happen, D’Angelo Russell needs to play a huge role offensively. He has shot a mere 22.7% this series leading to two straight unders on his point totals. This should change tonight as the series shifts to Minnesota where he shoots around 40% from the field. At 18.1 points per game during the regular season, we believe Russell reverts back to form offensively and scores 20+ in the first game back home this series.

Russell scored 31 points per game against the Grizzlies during the regular season this year. We expect his productivity and efficiency to progress while Memphis will continue to focus on shutting down Karl Anthony Towns on the defensive end.

There is no doubt Jaren Jackson JR. is becoming a young star in the NBA. However, we do believe tonight’s game is not a great spot for Memphis’ young Forward. Jackson is averaging just 15.1 points per game in his last 10 games. He has failed to eclipse the 15.5 mark in 3 of his last 4 games including the regular season.

Attempting to slow down Minnesota’s Karl Anthony Towns is no easy task. That combined with Jackson’s inability to stay out of foul trouble at times is a recipe for disaster in tonight’s critical meeting. Jaren Jackson JR. may have a large impact on the defensive end, but we do not see him taking a big part of the offensive load.

Rudy Gobert has had a slow start offensively this series, especially considering he is having the best scoring season of his career. Although he has not performed well offensively thus far, his point total at 13.5 seems rather low. Gobert averaged 15.6 points per game during the regular season and 16.7 points at home this season. He is a player that elevates his production on his home court, which we expect to be the case tonight.

Prior to this series, Gobert finished with 14 points or more in 6 straight games. Over his last ten games he is averaging 16.6 points per game. Gobert should be able to capitalize at home against a shorter Mavericks lineup.

Securing 15+ rebounds may sound like an unlikely feat, but not for the second-best rebounder in the game. Jokic collected nearly 14 rebounds a contest during the regular season this year. In his last 10 he is averaging just a tick below 15 at 14.9 rebounds per game.

He has yet to have a 15-rebound game in the postseason through his first two meetings with the warriors. The Warriors have shot the ball extremely well so far, but we expect this to regress as they play their first road game of the series. More misses will lead to more rebound opportunities for Jokic and the Nuggets. Expect Jokic to crash the glass on both ends of the floor and redeem himself after a late ejection in the last game.