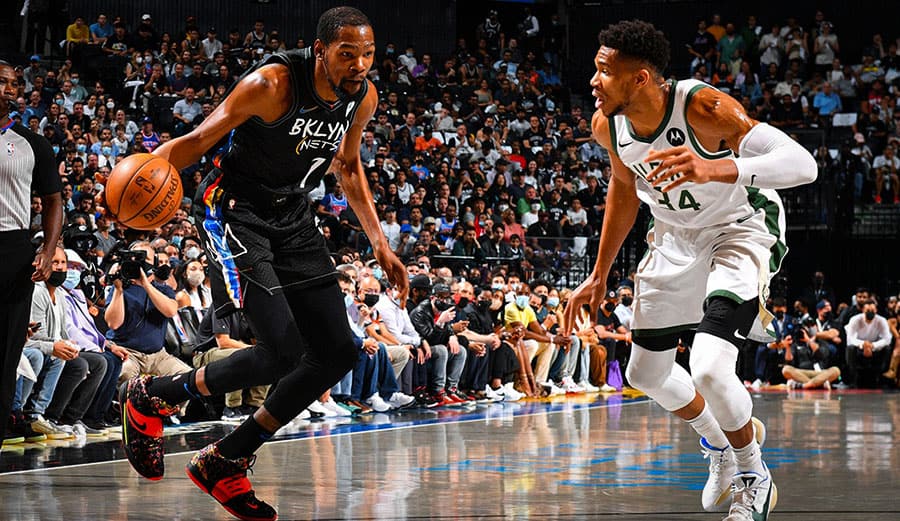 It seems like only a few days ago that the Milwaukee Bucks were crowned as the NBA champs after defeating the Phoenix Suns. However, we’re only a couple of months away from the start of the new NBA regular season. In the spirit of the upcoming season, PointsBet has released the odds for the 2021-22 NBA MVP Award.

Not sure what players to invest in for the NBA MVP? Our goal for this article is to help you with that! We’ll go over our Top Favorite Bet, our Top Mid-Range Pick, and our Top Longshot Bet to win this year’s NBA MVP.

Here’s a quick look at the current odds from PointsBet:

Now that Kevin Durant is finally healthy and capable of playing an entire season, it’s the perfect time to invest in him for the NBA MVP. KD only appeared in 35 regular-season games last year but he was back to his usual beast-mode ways during the playoffs and the Olympics. Though Durant has played 13 NBA seasons, he’ll still only be 33-years old by the time this season rolls around.

If you look at the history of the NBA MVP Award over the last seven seasons, you’ll notice that five of the seven MVP winners came from #1 seeds. This sets up perfectly for Durant since the Nets could very well be the #1 seed in the Eastern Conference once the playoffs tip-off. Sure, the Milwaukee Bucks may have something to say about that but the Nets definitely have the more talented squad when they are all healthy.

Sure, health is a bit of a concern with Durant but keep in mind that he played in 78 regular-season games with Golden State in 2018-19 before the dreaded Achilles tendon tear. He has shown the ability to play lots of minutes in the past. You can bet that Durant and the Brooklyn Nets will be out for blood after narrowly missing the NBA Finals last season.

Durant is almost unguardable when he’s fully healthy. The former University of Texas star has insane ball-handling skills that enable him to play multiple positions on the floor. At 6-10, Durant can easily shoot three-pointers over just about anyone who tries to guard him.

There’s not a lot of meat on the bone at the +750 price, but Durant hasn’t won a regular-season MVP since the 2013-14 season. The guy is due to take home the hardware this season so we’ll gladly put a medium bet on Durant +750 to win this year’s NBA MVP.

Devin Booker has quietly become one of the league’s elite scorers. The 24-year old averaged 25.6 points per game last season which ranked 14th in the league. Booker came close to leading the Phoenix Suns to an NBA championship last year but the Bucks got on a roll at just the right time.

The Suns should again be one of the top teams in the Western Conference and Booker is without a doubt the best scorer on the team. We love the fact that Booker is extremely durable. You can easily pencil this kid in to play in at least 70 games per season, which helps his MVP chances tremendously.

The crazy thing is that Booker is still improving as an all-around player. Having a veteran teammate like Chris Paul has improved Booker’s performance on the court. Booker has made back-to-back All-Star games and we expect him to take another big step in 2021.

At the good price of 20 to 1, putting a small wager on Booker to win the 2021-2022 MVP award seems like a wise decision. Keep in mind that last year’s winner, Nikola Jokic, was in this type of price range before the season started. Give us the best scorer on one of the Western Conference’s best teams! 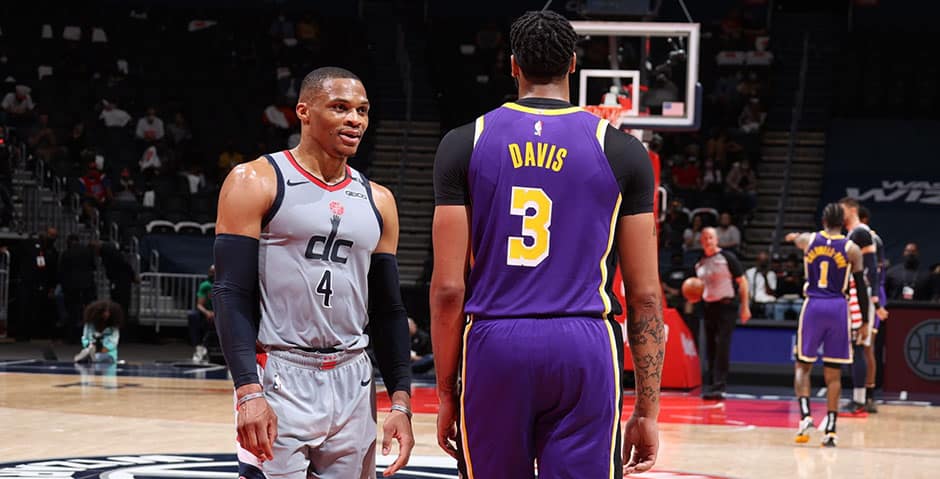 For our top longshot pick, let’s go with Mr. Triple Double himself, Russell Westbrook! After toiling away the last couple of years with subpar franchises (Houston and Washington), can you imagine how thrilled Westbrook is to be on the Los Angeles Lakers? Multiple reports have stated that Westbrook has always dreamed of playing for the Lake Show!

If LeBron James, Anthony Davis, and Westbrook can all stay relatively healthy, the Lakers will be a contender once again in the Western Conference! This should help Westbrook’s MVP chances, especially if he averages a triple-double for the entire season like last year! It also doesn’t hurt that the Lakers are the most popular franchise in the NBA.

To win an NBA MVP award, a player must stay healthy the entire season. Luckily for us, durability has never been a problem for Westbrook. In 13 NBA seasons, he’s played at least 70 games in eight of those seasons. That’s a highly impressive track record of being able to stay on the court for the majority of the season!

Now that Westbrook is back on a contender, we expect him to play with some added motivation this season! If Westbrook finishes with numbers that are similar to last season (22.2 points per game, 11.5 rebounds per game, and 11.7 assists per game), he’ll definitely be in the hunt for the MVP. The 55 to 1 number has a ton of value (and is just plain disrespectful) so we’ll recommend a small investment on Westbrook!

Does Luka Doncic deserve to be the favorite?

Luka Doncic is one of the most talented players in the NBA so it makes sense that he’s the favorite to win the MVP award. We were all reminded in the Olympics just how dominant Doncic can be when he’s on his game. It’s hard to believe that he’s still only 22 years old.

The only reason we passed on Doncic for MVP is because of his supporting cast. The Mavs aren’t a bad team, but they aren’t elite either. We think Doncic will win several MVP awards during his career but Mark Cuban has got to get him some more help before that happens.

Week 6 of the NFL season kicks off tonight with the defending champion Tampa Bay Buccaneers visiting the Philadelphia Eagles. While we didn’t list any props for that game in this article, check out our full preview for Thursday Night Football. Here are four prop bets that we think have plenty of value on Sunday. […]

The NFL Week 6 Sunday night game features the Seattle Seahawks traveling to Pittsburgh to take on the Steelers. Outside of the effect the Russell Wilson injury will have on this matchup, which we will get to, these two teams enter week 6 with a ton of similarities. Both teams are 2-3 overall, 1-4 against […]

The Great Lakes State has experienced exponential growth since sports betting was legalized back in January of 2021. Online casino apps in Michigan made their debut at the same time and have done quite well also. With so many options to choose from, it can be overwhelming for gamblers to decide which casino app is […]

Week 6 in college football had plenty of high-profile matchups and shocking upsets. Though the Week 7 slate isn’t as packed with many Top 25 matchups, there are plenty of games that offer profit opportunities for sports bettors. Here are our three best bets for Week 7 along with the live points spreads and totals […]

Enter your email to receive exclusive offers, weekly picks and game breakdowns, the latest sports betting news and more.
Thanks for subscribing, follow us on Twitter!
Copyright 2021 © Commercial Streaming Solutions Inc., All Rights Reserved.
If you or someone you know has a gambling problem and wants help, call 1-800 GAMBLER. This service is intended for adult users only.
This website includes commercial content.
Privacy   |   Terms of Use   |   Contact