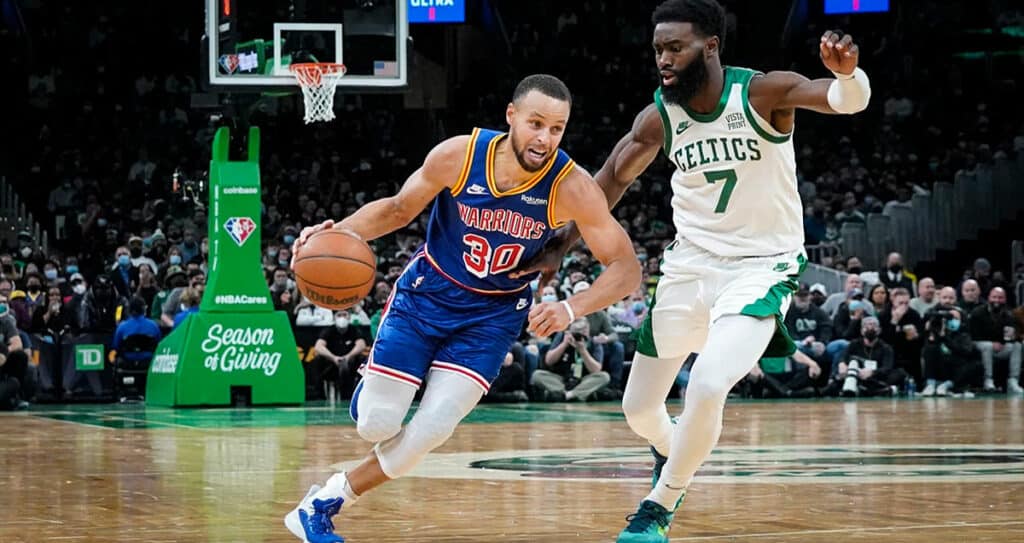 Steph Curry and the Warriors look to win their 4th NBA title in 8 years.
By Kyle Guenthner on May 31, 2022

Since only two teams remain in the hunt for the NBA title, we thought it would be a great time to dive into the NBA Finals odds and our best bets.

The series odds are relatively consistent form sportsbook-to-sportsbook. At the moment, Golden State is available between -150 and -160, while Boston is sitting at +130 at nearly every book. Here are the odds to win the 2021-22 NBA championship from our friends at FanDuel Sportsbook:

You would not know the Warriors are a -160 favorite for the series at first glance at the correct score odds. While Warriors in 7 (+310) is the favorite here, Celtics in 6 (+370) is not too far behind. Bettors willing to back a Celtics sweep could cash in a cool +1400. Here are the full correct score odds for the 2022 NBA Finals:

The NBA has developed into a score-heavy league, but one thing that has not changed is that defense wins championships. In the past 4 years, the NBA champion has been top 6 in defensive efficiency.

This trend will continue once again this year as both the Celtics and Warriors rank in the Top 2 in this crucial stat category. Now, without further delay, let's get to our best bet.

An argument can be made for both of the remaining teams to raise the Larry O’Brien Championship Trophy when it is all said and done. We believe there is one team that has the best chance of taking home the trophy this year. The Boston Celtics at +130 to win the NBA Finals is our best bet to win it all this year.

The Boston Celtics were struggling mightily at 21-22 midway through the season this year. Fortunately for Boston fans, the Celtics were able to completely turn around their season propelled by their suffocating defense. New head coach Ime Udoka has done a terrific job of helping this team gel together and operate like a well-oiled machine.

Another strength for the Celtics is the fact that they have been battle-tested this postseason. Boston has been tasked with taking down three of the most dynamic scorers in the entire league in Giannis, Kevin Durant, and Jimmy Butler. The Celtics won't be intimidated in the least by the Warriors' big three of Curry, Thompson, and Green.

Jayson Tatum has had a phenomenal postseason by averaging 27 points, 6.7 rebounds, and 5.9 assists per game. We expect Tatum to continue to dominate the offensive end while Marcus Smart figures out to limit Steph Curry and Klay Thompson. Our prediction is that Boston finds a way to win their first NBA title since 2008!

Want some extra action for the NBA Finals? Check out our Best Bets to win NBA Finals MVP! Best of luck with all of your action!