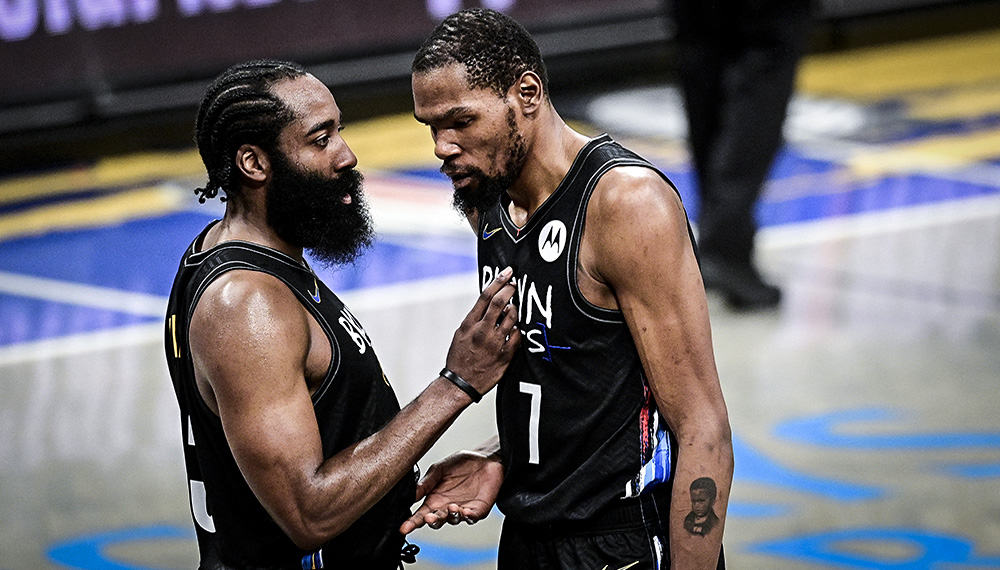 The Eastern Conference should produce exciting games and a competitive environment throughout the 2021-2022 NBA season. From top-to-bottom, the East is considerably stronger than what the West offers, which is a nice change of pace after decades of Western Conference-dominated basketball. It seems like for the next few years, the East will be the conference to watch for the most competitive teams and the best young talent in the league.

Below are the current Eastern Conference Championship odds, read on for our picks for best bets including best longshot bets.

In 2020, Brooklyn was easily the best team in the league and they only lost to Milwaukee due to injuries to both Kyrie Irving and James Harden. While Irving is currently out due to his vaccination status, we would expect him to either come back soon or get traded for a significant return that should help Brooklyn’s rotation.

The pieces that the Nets put around their three stars are strong and while it should take some time for this rotation to start working, we would expect domination in the second half of the season from Brooklyn. The Nets are the best roster in the league and if Kevin Durant and James Harden can both stay healthy, they will go all the way.

The defending champions might very well be the second-best roster in the league, but sadly they share a conference with the Brooklyn Nets. We don’t love the fact that the Bucks let P.J. Tucker go and Milwaukee is decimated with pretty serious injuries in the early going, but it would be foolish not to expect this team to recover. Still, with the Bucks having to go through Brooklyn on their way to The NBA Finals, we would need a much better price than +300 to pull the trigger on a bet.

Philadelphia will likely have a pretty rough season unless they can somehow trade Ben Simmons and get an All-Star level player in return. The probability of Philly moving Simmons early and also getting a decent package in return is pretty slim, which makes us want to fade them as one of the front runners in the Eastern Conference.

The Miami Heat look extremely promising in the early going. Pat Riley did spend big in the offseason and both the new additions and the original core of the roster are bringing it in the first few weeks of the season. This team is built for the playoffs and if the Heat can clinch a top-six seed in the regular season, this is not a team to overlook. The roster is built in a way that it is the perfect counter to the big three of Brooklyn, making Miami our favorite underdog in this division.

The Celtics did upgrade their roster in the offseason and new coach Ime Udoka seems to have things under control. This might be a top-three defense in the league and if Boston can figure out the scoring, this will be a tough out for anyone in the postseason. While we would not write Boston down, there are still better long shots on the board than the Celtics and it feels like Boston’s ceiling is a second-round exit in the crowded Eastern Conference playoff race.

The Hawks are likely a better team than the Boston Celtics, yet they have similar odds to win the conference to Boston’s. This certainly presents value on the Trae Young-led squad, especially as the Hawks are almost fully healthy with only sophomore big man Onyeka Okongwu being out to start the season (and even he should return within a few months). This is an extremely high-powered offense with a plethora of sharpshooters and we would not be surprised if the Hawks can upset one of the favorites of the conference in the first and second rounds.

The Bulls started the season with a perfect 4-0 record, but we would not expect this team to go deep into the playoffs. The rotation is decent offensively, but their lack of strong defensive players (especially in the paint) will hurt them in the post-season, especially. Chicago also does not match up well against the true contenders in the East.

Indiana has a very talented roster and if things work out well, we could see this team finishing around 4th or 5th seed in the conference. The problem is that the Pacers are extremely injury prone and with both Warren and LeVert starting the season on the IL, we cannot give them enough credit to make a serious postseason run.

Last year’s Knicks were a great story, but that team was one of the top overachievers if you look at any advanced metric. New York made some serious moves in the offseason bringing in sharpshooter Evan Fournier and star point guard Kemba Walker. We don’t like Kemba’s fit in the roster, but Fournier’s shooting and overall scoring power is a much-needed tool in Tom Thibodeau’s renewed arsenal.

In the early going New York started leaning heavily on three-point shooting, which was one of the team’s biggest weaknesses during their 2020 playoff run. While we believe that NY still needs a year or two to become a serious contender, this could be a team that gets into the second round in the East.

Our pick to win it: Brooklyn Nets (1 unit)

Despite the weak start and James Harden’s questionable conditioning, we are going with the Brooklyn Nets to win it all. With other teams starting the season strong you can find better odds on the Nets now than a few weeks before and it is an opportunity you should be taking advantage of.

Out of the longer shots in the division, our favorite is Miami (by a country mile) followed by Atlanta. Miami has a realistic case for a big run in 2021.

If you are looking for an extremely long shot to back in the East, consider the Pacers. Indiana is currently 3 games under .500 but have won three of their last five, including wins against the 76ers and Jazz. This is a team that should also get T.J. Warren back in December, a 20 PPG scorer that the team is paying $13 million to this season.