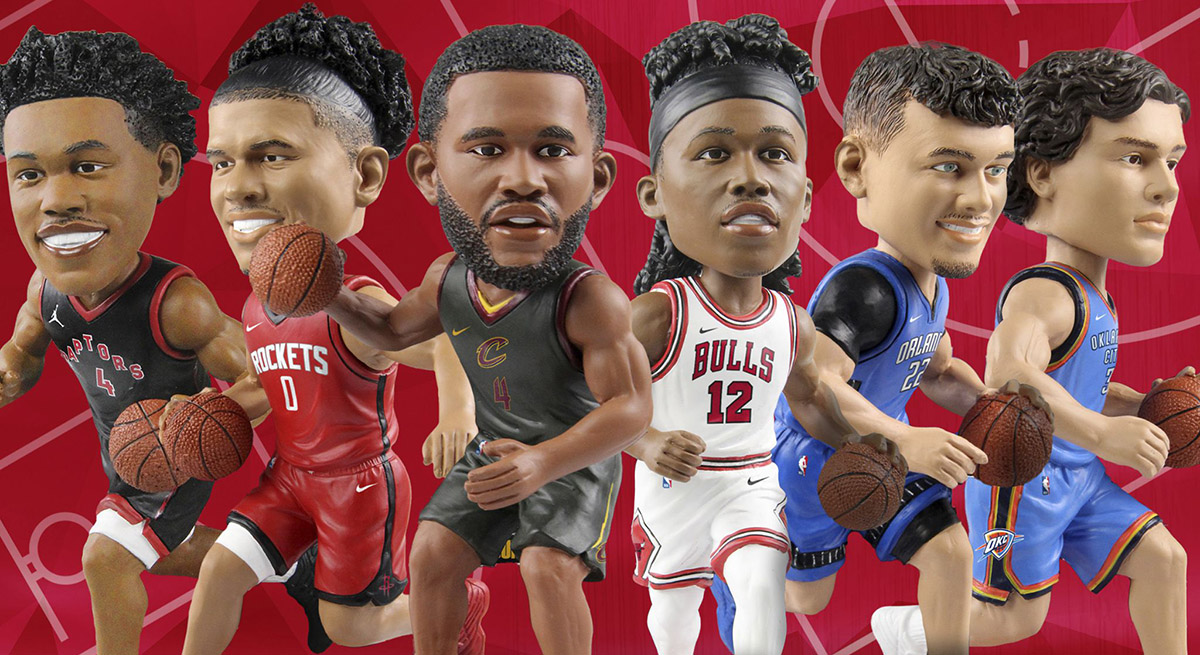 Our Favorite NBA Bobbleheads for 2022

The NBA season is here at last. All 30 teams are making their claim to stand atop the mountain, ravenous fan bases standing behind them. That means plenty of gear, including collectible bobbleheads that showcase your favorite team and player.

If you aren’t sure how to bolster your collection this year, here are a few of the best bobbleheads around. Before long, you will be looking for the next great addition to your growing collection.

The league will take its talented game overseas, bringing the action to Abu Dhabi as the game continues to expand on a global basis. What better way to show off the talent the league has to offer than with one of its best players?

Fans of the Bucks, Giannis, or the league in general can bolster their collection by adding this Antetokounmpo Abu Dhabi Games bobblehead to their collection. It is a great way to recognize one of the unique games in league history.

Giannis is flashing his trademark smile, wearing the forest green and gold of the Bucks. He stands on a platform of the same coloring, his name surrounded by the Bucks stag logo. Behind him, the skyline of Yas Island -Abu Dhabi is outlined in Bucks colors, showing the league is ready to make their mark.

Trae Young is without a doubt one of the most talented young players in the game. He has slick handles and comes up in big spots, helping the Hawks make an unexpected deep playoff run during his rookie season.

What better way to celebrate Young, as well as the league’s foray into Abu Dhabi, than with this commemorative bobblehead? The league will be taking its talents across the pond, hoping to wow the fans of Abu Dhabi in person.

Young looks as focused as ever on this bobblehead, displaying his trademark handles. He rocks the classic red and yellow of the Hawks road uniforms, ready to take it to the hoop. Behind him is the outline of the Yas Island skyline, the Hawks logo, and the buildings in Hawks colors. A great addition for fans of unique bobbleheads.

Abu Dhabi is not the only overseas venture for the NBA in 2022. They will also be making their way to Japan for the Japan Games, featuring the best and brightest NBA talent on display for foreign fans in the heart of Japan.

This bobblehead is one to love. Steph, with a sly grin on his face, jogs down the court in the road blue and gold of the Warriors. Whether he is ready to drive the lane or pull up for another three is known only to him.

The base itself is also quite cool and unique. Curry runs down a basketball court with his name and the Warriors logo adorning the front. But it is what is behind him that is unique. A Japanese-style building, in the Warriors trademark colors, stands behind him featuring his number, the Warriors logo, and team name. Truly a unique, standout bobblehead of one of the greats.

The city jerseys are one of the coolest concepts introduced by the NBA in recent years. They were put into place to acknowledge the culture of the city in which the team plays, featuring unique coloring and lettering.

Johnson, a part of the rebuilding process in San Antonio, is featured in this bobblehead. He is wearing the white home city jersey with the classic Spurs logo and unique southwest colors like teal and orange throughout.

The base is totally unique as well, featuring the colors throughout and the classic spur logo both on the base and the placard behind him. A must-have for Spurs fans of any age.

There are definitely some standouts as part of the city jersey trend that the NBA has introduced. One of them belongs to the Portland Trail Blazers. The “Rip City” jersey is one of the coolest around and features prominently into this bobblehead.

Lillard, one of the stars of the league, looks focused as he dribbles down the court, ready to drive or pull up for a three. He is wearing the black and red “Rip City” jersey that has become so popular since the inception of the city jersey.

The stand is quite unique, too. Lillard’s name surrounds the Blazers logo over a red, black, and white background. Behind him, the city name is highlighted by bright red roses, creating one of the most unique and aesthetically pleasing bobbleheads to fit anyone’s collection.

A fan of the NBA Champion Warriors and can’t decide which player’s bobblehead you want the most? Why decide when you can get eight of the key players from the squad in one boxed set?

This boxed set shows the NBA Champion warriors standing on an NBA Champions base, the golden trophy standing nearby. Stephen Curry, Kevon looney, Jordan Poole, Andrew Wiggins, Draymond Green, Andre Iguodala, Klay Thompson, and Jonathan Kuminga make up the set, allowing fans and collectors to be reminded of who the key contributors to the Warriors latest run were.

What better way to celebrate one of the best teams in the NBA with one of the best holidays? Bango, the Bucks mascot, floats high above the city with a smile on his face, ready to dunk on the city.

Below the huge float is the city’s fans in the gold and forest green of the Bucks. All throughout the city backdrop, the Bucks logo is displayed proudly as the city cheers on their championship team, hoping to make another run to the NBA Finals. A must-have for fans of the Bucks as they take on the competition.