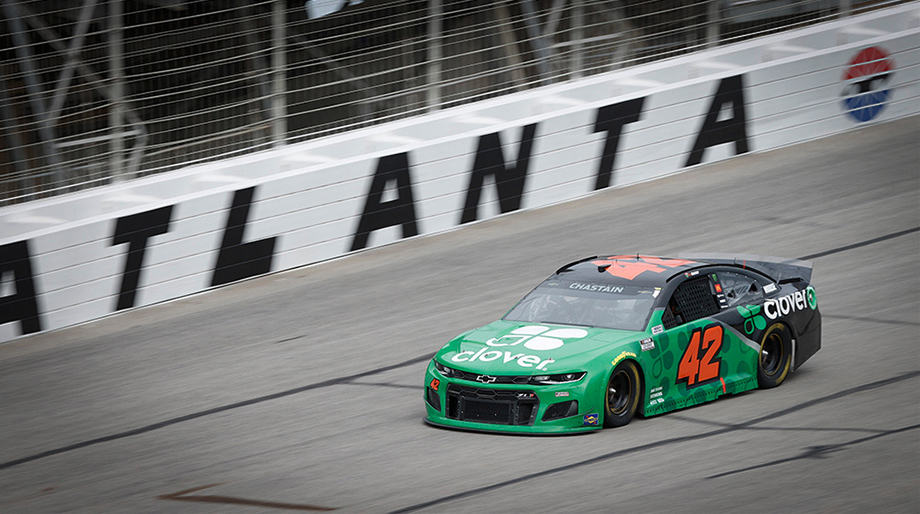 The NASCAR Cup Series heads north to New Hampshire Motor Speedway in Loudon for the Foxwoods Resort Casino 301 on Sunday, July 18 at 3:00 PM Eastern Time. The 301 lap event covers over 318 total miles and Brad Keselowski is the defending champion. This track has a rich 28-year history of hosting NASCAR races.

Kyle Busch and his #18 Toyota will start out in the pole position thanks to NASCAR’s qualifying metric, which takes into account the driver’s previous finish, fastest lap, and position in the points standings.

Busch’s fellow Joe Gibbs Racing teammate, Martin Truex Jr, was awarded the second-place starting position. Will both Busch and Truex be in contention at New Hampshire Motor Speedway this weekend?

Even though Busch and Truex are starting in the front row, Kyle Larson and Denny Hamlin are listed as co-favorites to win the Foxwoods Resort Casino 301 with odds of +450 each.

Hamlin and Larson are in a neck and neck battle for the top spot in the NASCAR Cup Series points standings. Hamlin currently has a slim 10 point lead even though he’s yet to find Victory Lane in 2021.

Needing some action on this week’s Foxwoods Resort Casino 301? In this article, we will take a brief look at the outright odds for all drivers and discuss three drivers that we think are worth betting on to win in Loudon this Sunday. Here are the odds from William Hill Sportsbook.

We love Kyle Busch this weekend in Loudon. Not only is Busch starting in the pole position, but the 36-year old has also won here three times in his illustrious NASCAR Cup Series career. Busch’s last victory at New Hampshire Motor Speedway was in September of 2017 but he also finished second in 2018 and eighth in 2019.

Busch loves this track and has great memories here. In fact, during his 2017 win at Loudon, Busch started out in the pole position just like he will on Sunday. “Rowdy Busch” has competed in 29 races at New Hampshire Motor Speedway and has an average finish of 13th place.

The 18-year NASCAR Cup Series veteran has led more laps at this track than any other driver. Busch has led a grand total of 1,128 laps at Loudon while the next closest driver is Kevin Harvick with 765 laps led.

Give us the motivated driver with the fantastic track history that is coming off a disappointing second-place finish last week in Atlanta. We’ll play a standard one-unit bet on Busch +600.

Guess who has the most career wins in Loudon amongst current drivers? Ding, Ding, Ding, it’s Kevin Harvick. The 45-year old has won at New Hampshire Motor Speedway an impressive four times. Harvick is a wily old veteran who knows how to navigate “The Magic Mile”.

We get that Hamlin and Larson deserve to be the betting favorites this week. However, pricing Harvick at 17 to 1 to win is flat-out disrespectful.

Are the books forgetting the fact that Harvick had back-to-back wins at this track in 2018 and 2019? In both of those instances, he started off in 14th place which is similar to where he’ll start on Sunday. Put us down for a 0.5 unit play on Kevin Harvick +1400.

Why not jump on Kyle’s brother at this generous price? Yes, we know Kurt Busch has had an inconsistent season so far. Yes, we know he’s only in 14th place in the points standings. However, Busch silenced a lot of critics by taking home the checkered flag in Atlanta last weekend.

Is it asking a lot of Kurt to win Cup Series races in back-to-back weeks? Probably so, but we can’t ignore the insane amount of betting value of 38 to 1 odds.

We recommend a smaller 0.25 unit play on Kurt Busch +2500. Since we’re betting on both Busch brothers to win on Sunday, we plan on buying a six-pack of Busch beer to enjoy while watching the Foxwoods Resort Casino 301. It may bring us an extra bit of good luck. Enjoy the race!