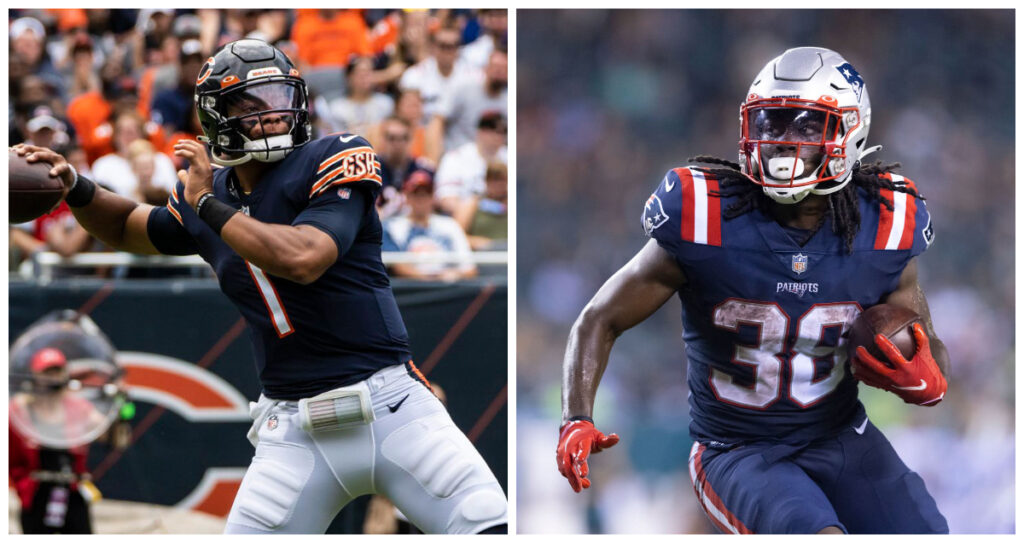 Can Justin Fields get the Bears offense going or will Rhamondre Stevenson and the Pats running game be the story of Monday Night Football?

Week 7 of the NFL regular season concludes with the Bears taking on the Patriots on Monday Night Football. New England opened up as a six-point favorite before a flood of Pats money made them an eight-point favorite at most shops. The total opened at 38.5 and has ticked up a bit to 40.

Will the Bears finally get back on track or will the Patriots continue their winning streak? Check out our 2 best bets for Bears at Patriots right here! Good luck with your wagers.

The Bears are only 2-4 on the year and have lost 3-straight games to the Giants, Vikings, and Commanders respectively. The loss to the Commanders was exceptionally bad as they were only able to put up 7 points.

Chicago actually used those 7 points to lead with under 8 minutes remaining. Finally, Brian Robinson Jr punched one in and gave the Commanders a 12-7 win. These Bears are 2nd worst in the league averaging only 15.5 points per game and are last in the league in yards per game with under 145 per game.

The Pats have won back-to-back games to get back to .500. Bailey Zappe has done a great job filling in for the injured Mac Jones.

That said, it has been the run game that has been the driving force of the offense, particularly Rhamondre Stevenson. The former Oklahoma star is averaging 5.1 yards per carry and has found the end zone three times this season.

The Pats' defense has been solid, allowing just 18.8 points per game which is 7th in the league. The secondary has done a fine job against the pass, as they rank 8th in the league in yards per pass allowed (6.3).

The Bears are atrocious and the Pats seem to have figured out what can make them successful. The Pats' defense should have no problem holding Justin Fields in check and the offense will control the time of possession and get us this cover easier than many will expect.

Fields has played a little bit better of late but we think New England's blitz packages will keep him confused in this one. Our numbers have the Pats winning this one by at least 11 points so we have no problem laying the 7.5.

The Patriots' offense started clicking in a big way a couple of weeks ago. They put up 29 against Detroit in Week 5 and 38 against Cleveland last week. We think New England's offense can put together another stellar performance for the third straight week.

New England's offensive line should be able to keep opening holes for Stevenson. The Pats rank 3rd in the league in EPA per rush while the Bears are 25th in EPA per run on defense. There's no reason the Patriots can't put up at least 31 points in this one.

Chicago struggles to pass the ball but they're one of the best rushing teams in the league. The Bears average 5.2 yards per rush, which ranks 6th in the league. The Pats' defense only ranks 22nd in that category, which tells us that Chicago could put up a couple of touchdowns. Take the Over!