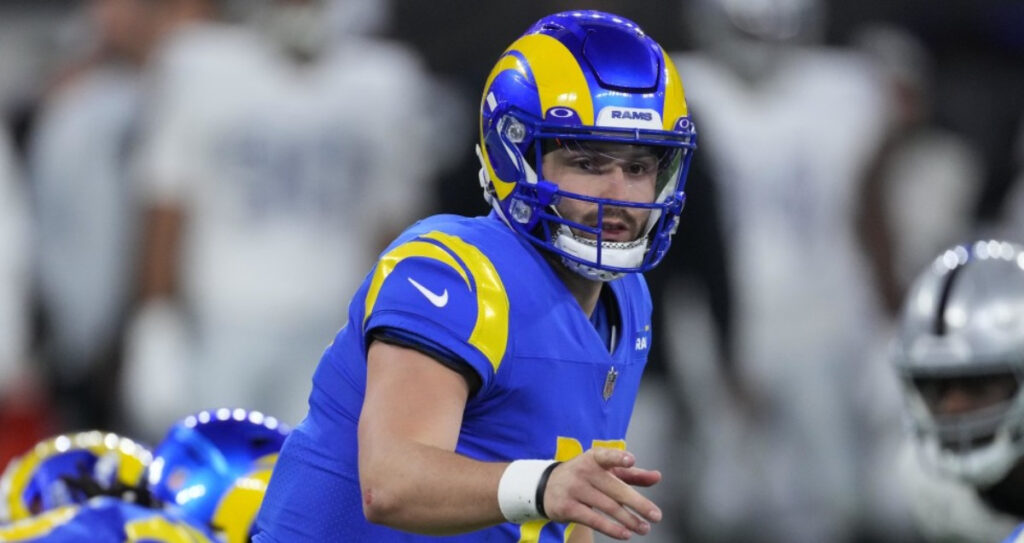 One of our favorite PrizePicks props for Monday Night Football involves Baker Mayfield.

Can Baker Mayfield find lightning in a bottle 2 weeks in a row? Just 11 days after leading the Rams to an improbable 17-16 comeback win over the Raiders, the former Heisman winner will get another shot at primetime glory.

Our NFL player props had a rough go of it on Sunday. To bounce back strong, we found 3 PrizePicks props for Monday Night Football's Rams at Packers matchup! Let's cash!

Since we mentioned Mayfield in the intro, we feel obliged to have a play on him tonight. The change of scenery was just what Mayfield needed to rejuvenate his career. He threw for 230 yards last week against Las Vegas and should be able to do the same tonight since he's had more time to learn the playbook.

This number just looks too low on the surface. FanDuel has this prop priced 10 yards higher than PrizePicks at 193.5. PointsBet has it even higher, at 195.5.

Sports betting is all about spotting discrepancies in the market, and this play is a prime example of that. It also doesn't hurt that Mayfield has gone over this passing yardage total in 5 of 8 games this season. He threw for 222 yards against Green Bay last season as a member of the Cleveland Browns.

Our numbers project Jefferson to end up with 48 receiving yards tonight, so we have to trust our numbers. The overall betting market tells us that there's value in the Over as well. Three major sportsbooks (DraftKings, BetMGM, and Caesars) price this 10% higher at 33.5.

Jefferson has been dogged by injuries this season and has only played in 7 games. However, the former Florida Gator has gone over this amount of receiving yardage in 3 of the last 4 weeks. Green Bay's secondary gives up 6.9 yards per pass (22nd), so Jefferson should be able to get a decent amount of separation during his routes.

The Packers also don't defend the run very well (5.0 YPC allowed), so the Rams should have some success with the play-action pass. That should be right up Jefferson's alley! He racked up 93 receiving yards against Green Bay in a game against them last season.

Gulp! Yes, we feel like a total square taking all Overs tonight! That being said, Watson has become Aaron Rodgers' favorite target this season. The rookie from North Dakota State has seen both his snap count and target share increase over the last few weeks.

Watson hauled in 4 receptions in 3 straight games before being held to 3 catches against Chicago in Week 13. We expect Rodgers to look Watson's way quite a bit coming out of the Packers' bye week. Watson has caught 7 touchdown passes over his last 4 games.

Matt Lafleur knows that the best way to attack this Rams' defense is through the air. Los Angeles allows 6.9 yards per pass, which only ranks 23rd in the league. They also rank 22nd in passing yards allowed per game (228.6).

We project that Watson will end up with 5 catches tonight, so we'll confidently play the Over. Best of luck with all your Monday Night Football action. Let's find that 3-0 comeback sweep!

We can't resist this promo bet from PrizePicks on Aaron Jones! He's only scored 2 rushing touchdowns and 2 receiving touchdowns on the season. We think Los Angeles can keep Jones out of the end zone tonight!

The Rams are pretty stout against the run, as they only allow 4 yards per rush (4th). They also rank 8th in rushing touchdowns allowed per game (0.6). FanDuel prices Jones's Anytime TD prop at +130, which tells us that the Under has a 56.5% chance of happening.

We also like that AJ Dillon is a bigger back and that he's more likely to get the red zone carries in this game. Dillon has a TD in each of the last 2 games, while Jones has only scored twice in his last 6 games. Take the Under!