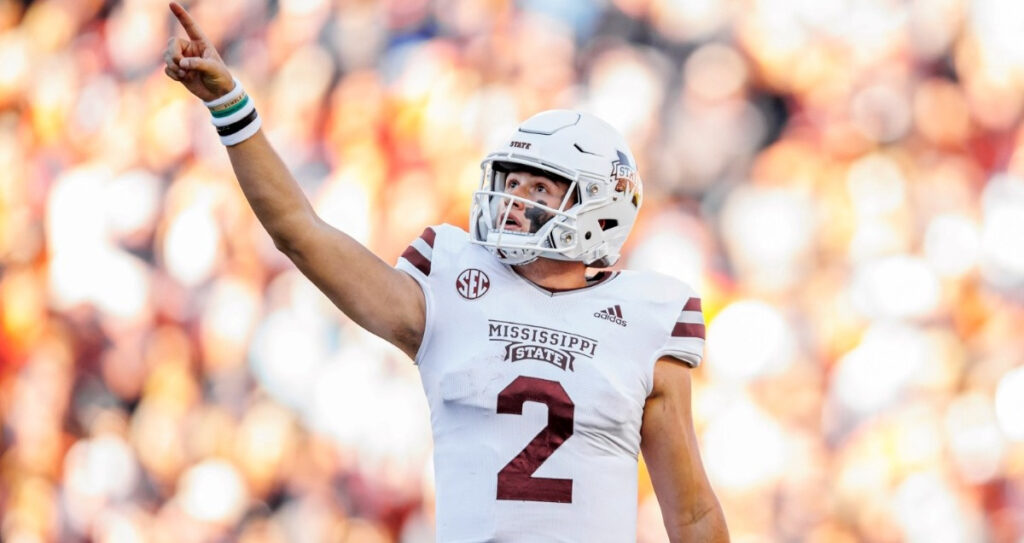 Will Rogers is a big reason why we like Mississippi State to upset Ole Miss in the Egg Bowl.

While the NFL will get the hype on Thanksgiving, don't forget about the heated rivalry known as the Egg Bowl. There's no love lost between the Bulldogs and the Rebels. Only 94 miles separate these 2 universities but the pure hatred that these 2 teams have for each other runs much deeper than that!

In last year's matchup, Matt Corral led Ole Miss to a 31-21 victory over Mississippi State in Starkville. He's since moved on to the NFL and Jaxson Dart is now the main man under center.

For the Bulldogs, Will Rogers is having another fantastic season. He's thrown for 3,474 yards and 32 touchdowns while only throwing 5 picks.

The Rebels are currently listed as 2.5-point favorites and the total is sitting at 59. Do the Bulldogs have the goods to pull off the road upset? Get our best bet for Mississippi State at Ole Miss right here!

The Bulldogs are 7-4 on the season but have lost 3 of their last 5 games. That said, the 3 losses are nothing to sneeze at. Back-to-back road losses to then #22 Kentucky and #6 Alabama preceded a 45-19 home loss to #1 Georgia.

Last week was a good bounce-back spot for them as they faced East Tennessee State at home and took them behind the woodshed for a 56-7 dominating win. It was 56-0 before the Bulldogs got a punt blocked and returned it for a touchdown.

They held ETST to only 43 passing yards and 3 turnovers. Will Rogers threw for over 300 yards and 5 touchdowns and no interceptions.

Ole Miss had high hopes after starting 7-0 on the season. A road loss to LSU followed by 2 losses to Alabama and Arkansas and a lucky road win over Texas A&M has left the Rebels with a 7-3 record and many questions.

Arkansas jumped out to a 35-6 lead at the half and were able to coast in the 4th quarter grabbing a 42-27 victory. Both teams had their way offensively with their rushing attacks.

Ole Miss went for 463 yards while Arkansas went for 335. The difference was the turnover battle which Ole Miss lost 3-0. Quinshon Judkins and Zach Evans combined for 421 of their 463 yards and 2 touchdowns on the ground.

In a matchup that has the makings of an all-time classic in the storied rivalry, it has been a headline off the field that has captured most of the attention. Rumors have been swirling about Ole Miss head coach Lane Kiffin resigning and taking the vacant Auburn job.

Though Kiffin has denied the rumors we have seen this story play out before with Kiffin moving from job to job over the years. We believe the distraction and more importantly, the regression of this Ole Miss team over the past several weeks will lead the Bulldogs to a strong road victory to end their season.

We love that we're getting a solid, experienced QB like Rogers as an underdog. In a game that could come down to the final play, take the points with the Bulldogs!