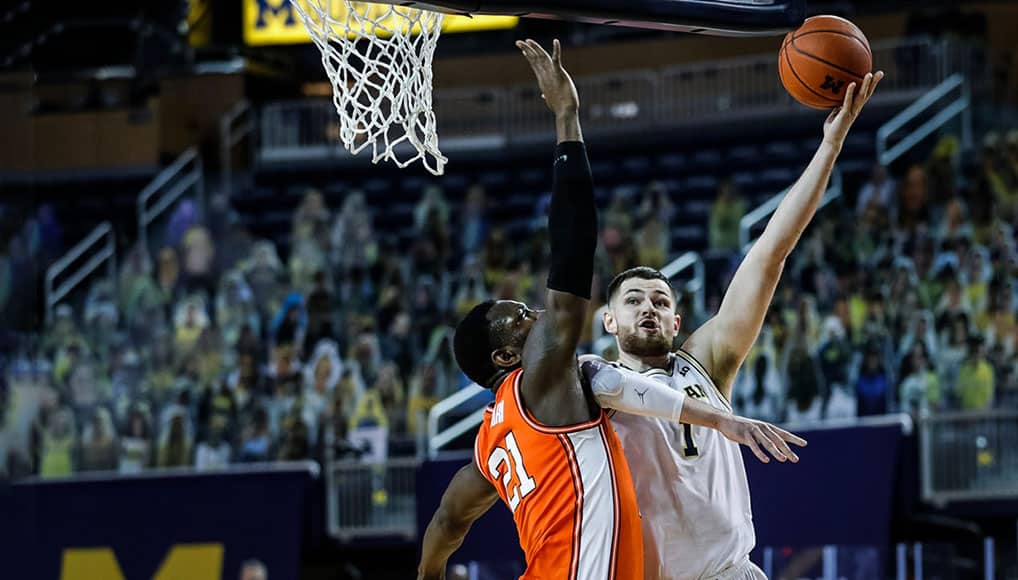 Michigan at Illinois - Live Odds and Our Best Bet Picks

The Michigan Wolverines head into Assembly Hall as a 9.5 point underdog against the Illinois Fighting Illini on Friday night. Michigan has had arguably the most disappointing start to the season among all teams in the country. Some experts had them slated to be a serious title contender and instead, they have gone just 7-6 overall and 1-2 in the Big 10.

Illinois has had a much stronger start to their season going 5-0 in the conference and 12-3 overall. The Illini are coming into this game on a 5-game winning streak while the Wolverines have lost 3 of their last 4.

Sophomore Hunter Dickinson has been the one consistent Wolverine thus far in the season. He is averaging 16.1 points, 8.8 rebounds, and 1 block per game. He will have a tough time hitting his averages Friday against the top big man in the Big 10, Kofi Cockburn.

Cockburn's 22 points, 12.5 rebounds, and 1.1 blocks per game give him the team lead in all three categories. Despite losing Andre Curbelo back in late November, this Illini team has found help in Jacob Grandison who has lifted his scoring average from 4.6 points per game last season to 12.1 points per game this season.

Michigan Wolverines: Not Who We Thought They Were

When Hunter Dickinson decided to come back for his sophomore year and forgo the NBA draft, the Michigan faithful began to have visions of him cutting down the nets in New Orleans. However, the Wolverines have been unable to string together three wins and are on the cusp of losing their third straight. As bad as the Wolverines have been record-wise, they rank in the top 25 in adjusted offensive efficiency and inside the top 50 in adjusted defensive efficiency.

In their last game, the Wolverines suffered a 75-67 loss at Rutgers on Tuesday night. The three-point line was the story in this recent loss. Michigan shot just 3 of 15 for 20% while allowing Rutgers to go 11 of 23 for 47.8%. After trailing by nine at the half, the Wolverines saw the deficit grow to as much as 15 in the second half. Dickinson led the way with 25 points and will be leaned upon in containing Kofi Cockburn Friday night.

The Illini started out just 2-2 on the season while Kofi Cockburn served his suspension. Upon his return, they rattled off 5 straight wins. They finally dropped one in mid-December to the then #11 Arizona 83-79. However, they followed that up with another 5-game win streak and will look to extend that to six games on Friday against the visiting Wolverines.

Illinois grabbed a ten-point victory 81-71 over Nebraska on Tuesday. In the win, Illinois overcame Nebraska’s 50% shooting from beyond the arc and shooting just 63% from the foul line themselves.

Cockburn finished with another double-double scoring 16 points and grabbing 13 boards. Senior Trent Frazier led all scorers with 29 points, dished out 5 assists, and grabbed 4 steals. Jacob Grandison continued to play the filler role for Curbelo who has been out. The Illini will need to avoid looking ahead of the Wolverines as they have a date with #7 Purdue up next.

Betting Trends for Michigan and Illinois

It is typically bad for the public and good for sportsbooks anytime a bettor-favorite team like Michigan goes on an extended losing streak. That certainly plays out with their ATS record over their last nine games. Illinois, on the other hand, has been great ATS over their five-game winning streak and even better in the Big 10.

Michigan is 2-4 ATS in their last 6 games on the road.

Illinois is 10-2 ATS in their last 12 games against an opponent in the Big Ten conference.

Michigan has not played since January 4th, giving them ten days off and rust will be a factor. Illinois has been rolling and playing the best basketball in the conference. Michigan is heavily reliant on Hunter Dickinson and unfortunately for them, the Illini’s Kofi Cockburn will give Dickinson his toughest test of the season. The dual between these two will serve as the game within the game but Illinois’ supporting cast will be the story in how they are able to get the cover here at home.

Both teams have been going over the total in the majority of their recent games. Michigan has done it in 5 of their last 6. Illinois has done the same in 9 of their last 11. These trends will continue in this one as these offenses rank 1-2 in the conference in efficiency, bet the over.