Miami vs Texas A&M - Betting Preview and Our Best Bet 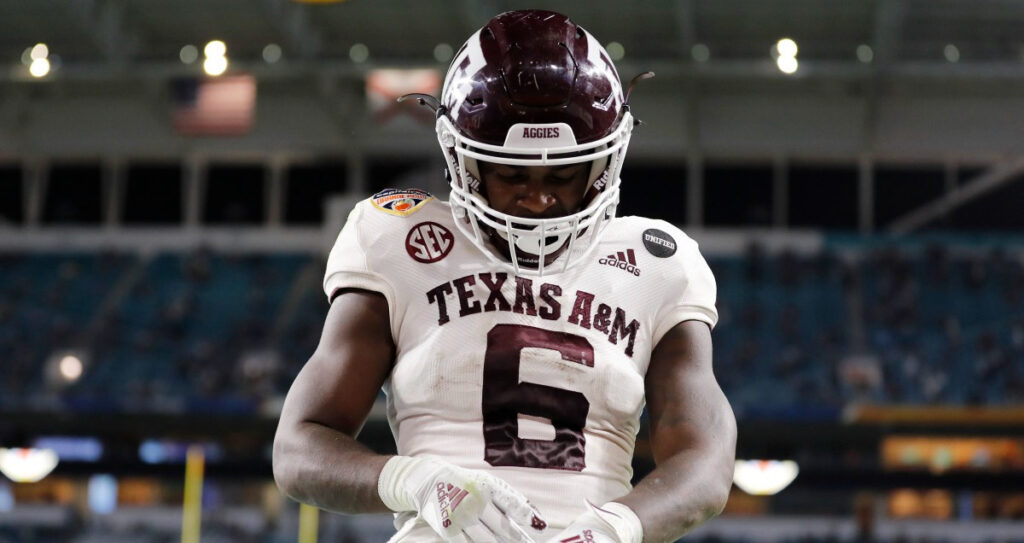 Can Devon Achane get Texas A&M back on track against Miami?

One week ago, the Miami Hurricanes' road trip to play the Texas A&M Aggies on Saturday was set to be a Top 15 matchup featuring two undefeated teams in their first real test of the season. Appalachian State made sure that was not the case, stunning the No. 6 ranked Aggies last weekend in College Station.

After that stunner, the implications of this game changed dramatically for the Aggies. Texas A&M is looking to salvage its season, one that started with aspirations of claiming the school’s first national title since 1939. While a loss to the No. 13 ranked Hurricanes would not end their postseason dreams, Texas A&M would need to win the SEC Championship to preserve any playoff hopes.

For the Hurricanes, the narrative stays the same. A young Miami squad finding ways to win games looks to make its mark against an SEC West team loaded with talent. Can Miami earn its first big win under Mario Cristobal, or will Texas A&M weather the Hurricanes?

No Sweat First Bet Up to $1,000Win or Get a Refund
Claim Offer

What to Expect from Miami Offense vs Texas A&M

A new “Big Three” has emerged, storming through opponent defenses for the Hurricanes. Second-year star Tyler Van Dyke is completing nearly 74% of his passes on the young season with 456 yards through the air and three TDs. Van Dyke’s top target is Xavier Restrepo, a sophomore WR with 11 receptions, 172 yards, and one TD to start the year.

On the ground, Miami is relying on Henry Parrish Jr. The running back has netted 5.9 yards per carry this season, turning 37 attempts into 217 yards rushing with four TDs. Overall, the Hurricanes have run the ball 62.5% of the time to start the season, a stat aided by the team’s ability to dominate lesser opponents.

What to Expect from Texas A&M Defense vs Miami

New Aggies Defensive Coordinator DJ Durkin needs to pressure Miami into committing turnovers and get his unit off the field. Against Appalachian State, Texas A&M pressured the Mountaineers’ QB four times and had one sack and zero turnovers. Incredibly, the Aggies' defense remained on the field for over 41 minutes due to quick 3-and-out offensive possessions and App State’s ability to run the ball.

While stocked with talent, Texas A&M is relying on inexperienced players to start the season. Six starters and 13 overall players on the defense and two-deep chart, respectively, are freshmen or sophomores. The inexperience has led to a front seven unable to stop the run, allowing 4.0 rushing yards per attempt and nearly 300 yards rushing combined in two games.

What to Expect from Texas A&M Offense vs Miami

Texas A&M’s offense is also balancing a bevy of young players. Eight starters - including nearly the entire offensive line - are freshmen or sophomores.

The Aggies’ Devon Achane has been the team’s brightest star thus far. The junior RB has 30 touches for 122 yards and two rushing TDs. Achane also has a kickoff return TD to his credit.

As for the passing game, QB Haynes King started the previous two, completing 65% of his passes for 461 yards with three TDs. His main target to start the season is WR Ainias Smith, as the senior has hauled in 10 receptions for 185 yards and two scores.

What to Expect from Miami Defense vs Texas A&M

Miami’s defense is still a work in progress. Through two games, the defense has allowed only 2.3 yards per rush, limiting Bethune-Cookman and Southern Miss to a combined total of 126 rushing yards. The Hurricanes have totaled 13 TFLs and 5 sacks against inferior competition.

This game could be a shoot-out, making the 46 over/under an enticing offer. The Hurricanes have allowed 11 plays for 20 or more yards in two games, and the Aggies have scored all but one of their TDs this season from 25 or more yards out.

Yet the over/under is one you should pass on this week. While Texas A&M’s quick-strike offense could make it interesting, there’s too big of a risk relying on a unit with only seven points scored against Appalachian State, the same team that gave up 63 points to North Carolina the week prior.

Appalachian State provided Miami with a game plan to beat the Aggies: run the ball and control the clock. Expect Parrish Jr to finish with 20 or more carries to pace Miami, and bank on Van Dyke picking up yards in chunks should Texas A&M cheat up to stop the run.