Mavericks at Warriors: Best Bets and Player Props for Wednesday, May 18 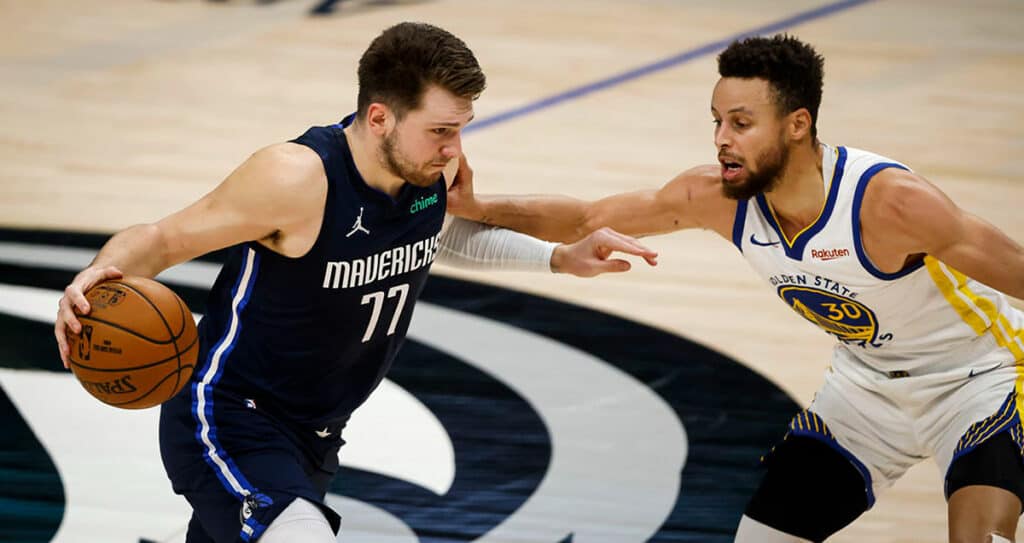 Can Luka continue his hot streak and upset Steph Curry and the Warriors in game 1?
By Kyle Guenthner on May 18, 2022

Game 1 of the Western Conference Finals tips off at 9:00 PM ET on TNT Wednesday night. The Mavericks are coming off a game 7 blowout against the 1-seeded Suns, and now they travel to the Bay Area to take on the Warriors. Golden State holds a -5 spread tonight at home against the Mavs. The over/under is set at 214.5 points for tonight’s game 1 matchup.

Will the Warriors take an early lead in the series or will the Mavericks steal one on the road? Here are our best bets and prop bet picks for Game 1 of the Western Conference Finals between the Warriors and the Mavericks.

This series is a matchup of two incredible defensive teams who have shut down offenses all season. Both teams rank inside the top 6 in defensive rating with the Warriors at 2 and the Mavericks at 6. The Warriors produced some high scores in their last series, but that was no surprise as they were dealing with The Memphis Grizzlies who are a top 5 team when it comes to pace.

This matchup this series is completely different as the Dallas Mavericks rank dead last in pace. Neither team pushed the pace at a high rate this regular season. In 4 matchups this season, the under has hit twice and the over has hit twice. We expect both teams to come out slow and feel each other out. We like the first half under more than the full game under as this could be a close game, so we want to avoid late fouls leading to free throws.

Outside of the two headliners, game 1 of the Western Conference Finals presents plenty of value player props as the Warriors look to defend home court tonight. Here are our two favorite props for tonight’s matchup.

Dwight Powell’s time on the floor has dwindled a bit leading to a dip in production during the postseason thus far. The Warriors are a much better matchup for Powell compared to The Jazz and Suns with Gobert and Ayton. The Warriors like to play a small lineup for the majority of games, which will help Powell on the offensive end.

In 4 games against the Warriors this season, Powell has averaged 5.3 points on just shy of 19 minutes per game. Powell has gone over 4.5 points in two straight postseason games, and we expect this to continue tonight.

Klay Thompson is coming off of his best game of the postseason to this point as he scored 30 points in a game 6 victory over the Grizzlies. However, Klay failed to score more than 21.5 points in six straight games prior to game 6. Klay is averaging just 15.5 points per game against Dallas, and only 20.4 points per game this postseason.

Thompson’s strength has always been his 3-point shooting over the course of his career. Dallas is allowing less than 10 3-pointers made per game in the playoffs this year, which does not benefit the Warriors and Klay. We believe Klay will go under 21.5 points in game 1 tonight.