Maryland vs Michigan - Live Odds and Our Best Bet 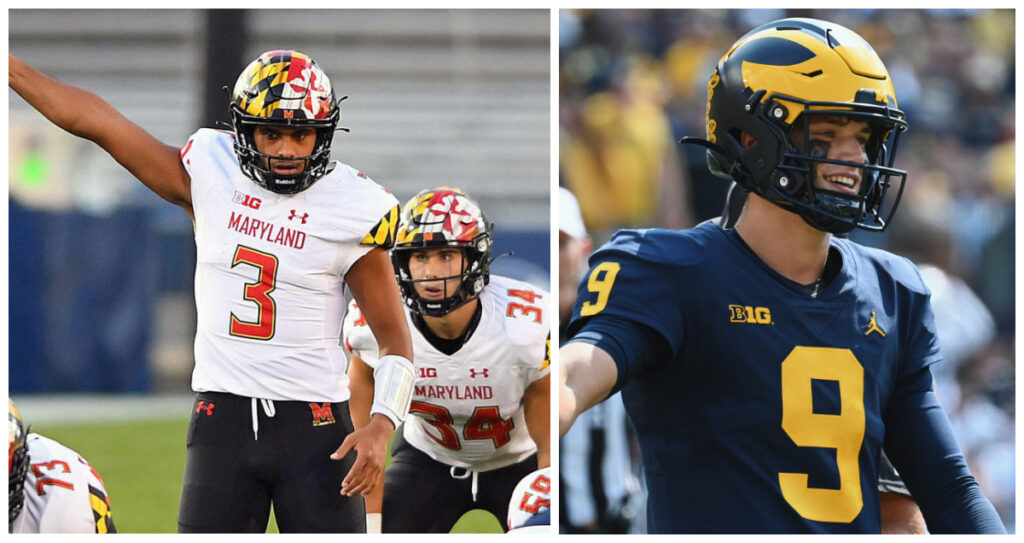 The QB battle between Taulia Tagovailoa and JJ McCarthy will be a key factor in deciding Maryland vs Michigan.

When the Michigan Wolverines host the Maryland Terrapins Saturday in Ann Arbor, the matchup pits two Big Ten schools with identical undefeated records coming from the opposite ends of the spectrum.

Maryland nearly entered the game at 2-1. The Terrapins rallied in the fourth quarter against a stronger-than-expected SMU squad to win 34-27 last week, maintaining their unblemished record.

Michigan’s 3-0 mark, however, came against teams with a combined 2-9 record. The Wolverines did their job, winning by a combined score of 161-17 against Colorado State, Hawaii, and Connecticut.

Will the heavily-favored Wolverines defend their home field and No. 4 ranking, or will the Terrapins pull off their biggest upset since joining the Big Ten conference?

First Bet on Caesars Up to $1,250Use Promo Code: BVFULL
Claim Offer

What to Expect from Maryland Offense vs Michigan

The Terrapins have fielded an explosive offense to start the season, averaging 40 points and nearly 500 yards per outing. Maryland’s offensive performance came through a surprisingly balanced attack as the Terrapins have notched almost as many rushing plays this season as passing.

Maryland’s blistering offense starts with Taulia Tagovailoa. The Terrapins signal-caller is completing over 77% of his passes, racking up 895 through the air and six TDs while maintaining a 180.5 QB rating. His top target is sophomore TE Corey Dyches (12 catches, 102 yards), whose only score on the season was the decisive TD against SMU.

What to Expect from the Michigan Defense vs Maryland

Michigan will be in Maryland’s backfield. The Wolverines have 18 TFLs on the season, including eight sacks. The pressure starts up front with linemen Mike Morris, Jaylen Harrell, and Mazi Smith, a trio combining for 20 tackles, 6 TFLs, and a pair of sacks on the young season.

The pressure is leading to a poor passing performance for opponents. Michigan has allowed a paltry 91 yards through the air on average, holding QBs to a 44% completion rate. Overall, the Wolverines are holding opponents to a mere 25% third-down conversion rate while forcing 25 punts to start the year.

What to Expect from Michigan Offense vs Maryland

A new starting quarterback to lead this run-first offense. Dynamic QB JJ McCarthy takes the reins for the Wolverines after last year’s starter Cade McNamara was injured against UConn Saturday. McCarthy has been nearly perfect on the young season, completing 30-of-34 passes for 473 yards and three TDs.

While McCarthy can also run when needed (7 carries, 73 yards, 1 TD), the primary runner in Michigan’s offense is Blake Corum. The junior RB has gained 239 yards on 34 carries and added seven TDs, including a school-record five scores against UConn last Saturday. Through three games, the Wolverines have amassed nearly 700 yards rushing behind an improved offensive line.

What to Expect from Maryland Defense vs Michigan

Maryland commits errors and allows opposing offenses to score. The Terrapins committed 15 penalties for 141 yards against SMU, including several back-breaking penalties on defense. For the year, Maryland has committed 31 penalties for 277 yards, unforced errors that have helped opponents extend drives against the Terrapins.

Those miscues are making matters worse for the Terrapins' defense. Opponents are averaging over 19 points and nearly 400 total offensive yards on average. SMU carved up the Terrapins' defense, netting 369 yards through the air while rushing for another 151 on the ground in their near-win last Saturday.

Michigan is clearly the better team and should be expected to win against Maryland. The reason for concern in a three-score spread is the Wolverines' defense. The Terrapins will be the unit’s first real test as Maryland has significantly improved on offense from last season. The Terps should be able to keep this game closer than a three-score contest.