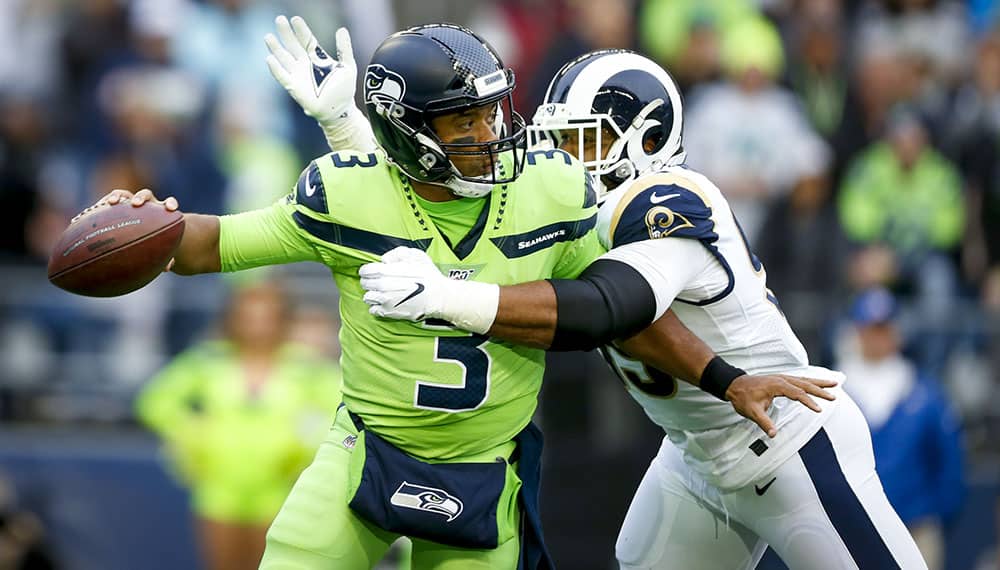 After back-to-back duds on Thursday Night Football, we finally have a marquee matchup here in week 5. The 3-1 LA Rams travel to Seattle to take on the Seahawks who beat the 49ers last week to move to 2-2.

In a year where home field seems to mean nothing, following back-to-back seasons of home teams having all-time low winning percentages, can the Seahawks, who were 7-1 at home last season, defend their home turf and win as a home underdog on Thursday night?

In this article, we will break down the current odds, what we expect to see from each team, and share our pick for the best bet for this NFC West showdown.

Bet $20 on Thursday Night Football and Get $200 at PointsBet

Sportsbooks could be in trouble heading into Thursday Night Football featuring the LA Rams at the Seattle Seahawks. This NFC West divisional matchup was lined as a pick’em last week, with both teams laying -110 on the money line. However, early sharp action has been exclusively supporting the road team moving the Rams out to a –2.5 point favorite across most US sportsbooks.

All the signs point towards the Rams’ support not stopping here and we could easily see this spread getting to a field goal before kick-off. Here is a look at the best odds available for every Thursday night bet:

We will keep this updated with the best odds boost offers available from the top US sportsbooks. At the time of publishing, only PointsBet has a set of promotions published, but they are going to be tough to top and even include a USMNT boost for you soccer fans:

What We Expect from the Rams on Thursday Night

Why are we seeing money coming in on the Rams' after they lost to the Cardinals, while the Seahawks beat the 49ers? If you look into each of these games, you will see that Seattle’s victory has been pretty unimpressive, while LA could have easily won hosting Arizona.

While the Rams let the Cardinals (the only unbeaten team in the league) score 30+ points and reach 400+ yards for the fourth consecutive time this season, Arizona really got lucky in that game. First of all, the Cardinals had a +2 turnover differential in Sunday’s game, but the Rams also possibly lost 7 points after not challenging a questionable call on the field on a Stafford run.

Talking about Stafford, he had a mediocre game at best overthrowing his receivers badly on multiple occasions, despite only being under pressure on nine dropbacks. Still, the Rams had 280 passing yards against Arizona’s 240 and LA also won the yards per play battle 6.3 to 6.2.

Overall, it was a decent, clear game by LA with no sacks allowed and if Stafford has just a bit better day, they could have easily won this one. The Kupp-Van Jefferson-Woods WR trio is still elite, and they get to face a Seattle team that has allowed an average depth of target of 7.9 yards and 11.8 yards per reception. This does not spell good things for this weak Seahawks defense.

What We Expect from the Seahawks on Thursday Night

Seattle is coming off a 28-21 victory against San Francisco, but we were not impressed by the Seahawks. Russel Wilson only finished with 149 total yards against this banged-up 49ers squad that was missing many key players on the defensive end. Wilson only had an average depth of target of 5.8 yards, which isn’t promising heading into TNF against a high-powered Rams squad known for an effective deep passing game.

Running back Chris Carson was also underwhelming averaging only 2.3 yards per carry and, outside of D.K. Metcalf, none of the Seattle receivers had more than 65 yards.

We are not overlooking Seattle, as the Seahawks are averaging a 73% pass completion rate through four weeks with a 9.6-yard average depth of target, but the top-heavy construction of their roster results in a really good matchup for the Rams, a team that has at least one elite defender at every position.

We would expect LA to lock down D.K. Metcalf resulting in Seattle leaning more on the run game. In four weeks, LA only allowed 10.2 yards per successful reception, almost two full yards less than what the Seahawks gave up to opposing offenses.

We have to give a lot of credit to this LA offense. Matthew Stafford had three good games before his clunker last Sunday, and it is only fair to expect a bounce-back against a Seattle secondary that could easily be one of the worst defensive units in the league.

If you are into analytics, you will be happy to know that the Rams also lead the league in offensive DVOA by a very large margin (37% with the second-best team, the Seahawks sitting at 32.8%), no wonder why our model likes the road team on Thursday!

Give us the LA Rams against the current 2.5 point spread! We will be aboard the Rams hype train unless the spread reaches three points, which we don’t see happening (would lay off there). This Seattle team is still talented, but they have huge shortcomings defensively and the coaching matchup also doesn’t favor them going into this one. Lay the points with LA! Our model also shows a slight edge on the full game over at 54.