Kentucky vs Tennessee - Betting Preview and Our Best Bet 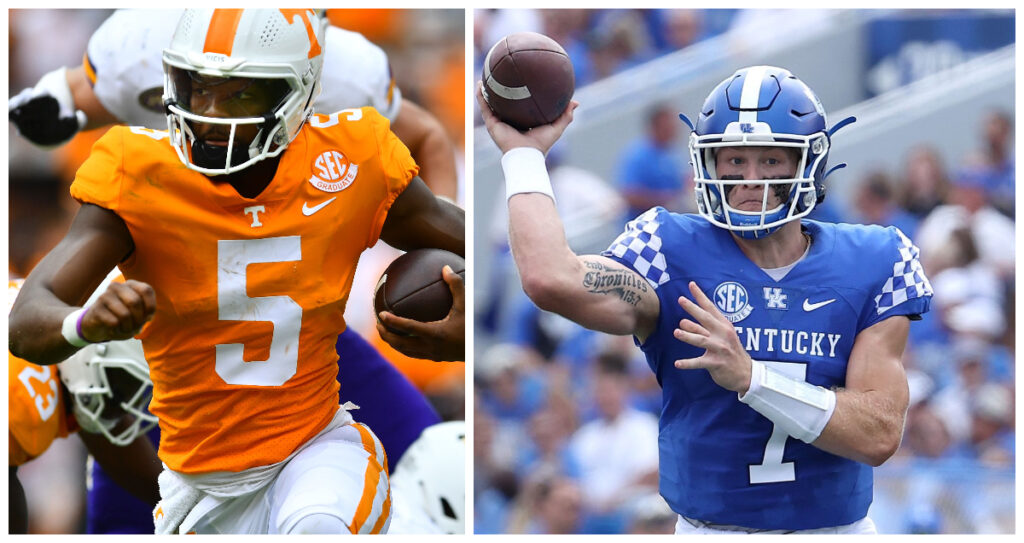 Can Hendon Hooker and the Vols remain undefeated? Or will Kentucky and Will Levis pull off the upset?

When the Kentucky Wildcats last visited Neyland Stadium in 2020, Kentucky earned its first road victory over the Tennessee Volunteers in more than 36 years. That lopsided loss was part of a six-game losing streak that propelled the Volunteers to make a change, hiring both a new athletic director and football coach in 2021 to right the ship.

Josh Heupel has obliged the Volunteer fanbase, guiding No. 3 Tennessee to its highest ranking since 2005 with their 7-0 start. The former UCF coach transformed the Volunteers into a legitimate college football playoff contender with a high-octane offense no team has been able to stop.

Meanwhile, No. 19 Kentucky also has a program-changing coach on their sidelines in Mark Stoops. The Wildcats' head coach set the mark for most coaching wins at the school earlier this season and has guided his team to a 5-2 record.

When the Wildcats face off against the Volunteers on Saturday evening, Kentucky will attempt to win back-to-back games in Knoxville for only the third time in the 105-game series history. Will Kentucky or Tennessee leave Ol’ Rocky Top with their SEC Championship Game aspirations intact?

What to Expect: Kentucky Offense vs Tennessee

After serving a multiple-game suspension due to off-season issues, Kentucky RB Chris Rodriguez Jr. made his return October 1. In three games, the Wildcats' leading rusher from a year ago has returned to form, posting back-to-back 100-yard performances against South Carolina and Mississippi State.

Rodrigeuz’s return has lightened the load off Kentucky QB Will Levis. The senior signal-caller has had his best season as a Wildcat yet, throwing for 1,635 yards and 13 TDs on the season. His top targets are wide receivers Tayvion Robinson (25 catches, 392 yards, 3 TDs) and Barion Brown (24 catches, 350 yards, 2 TDs).

What to Expect: Tennessee Defense vs Kentucky

The blitz-happy Volunteer defense has been vulnerable through the air all season. Even before Alabama’s Bryce Young torched Tennessee for 455 passing yards two weeks ago, the Volunteers ranked among the bottom 20 teams in the country in pass defense.

Since? Tennessee has dropped to second-to-last place overall in FBS while yielding 330 yards each outing. OUCH!

To be fair, part of the defensive woes stem from their ability to shut down the running game. The Volunteers rank eighth in all of FBS against the rush by allowing 91 yards each game. Thanks to their immense backfield pressure, Tennessee has recorded 17 sacks and 60 QB Hurries on the season.

What to Expect: Tennessee Offense vs Kentucky

Sensational senior QB Hendon Hooker has an opportunity to become the first Tennessee player to win the Heisman Trophy. Through seven games, Hooker is leading the nation’s No. 1 ranked scoring offense, averaging over 50 points per game.

Hooker can beat opponents with both his arm and his legs. The 6’4” passer has completed over 70 percent of his throws for 2,093 yards and 18 TDs. Hooker also is third on the Volunteers' offense in total rushing, netting 315 yards and three TDs on the ground.

In addition to Hooker, opposing defenses have a dual threat of runners coming out of the backfield. RB Jaylen Wright has 405 yards on 85 carries and four TDs while fellow back Jabari Small has a team-best 89 carries for 397 yards and eight TDs on the season.

What to Expect: Kentucky Defense vs Tennessee

Kentucky has evolved into a defensive-minded football team under Mark Stoops. The Wildcats are ranked ninth nationally in scoring defense, surrendering under 17 points per outing.

Amazingly, the Wildcats are producing high-quality defensive results without creating turnovers or significant pressure on opponents’ quarterbacks. Kentucky has only eight takeaways on the year and recorded just 10 sacks, ranking 99th or worse in the country in both categories.

While Tennessee is the nation’s best-scoring offense, this game will not be a high-flying affair. Kentucky has held every opponent this season to 24 points or fewer, including two weeks ago in a home win over pass-happy Mississippi State.

Both offensively and defensively, the Wildcats are talented enough to make this a game in the second half. Ultimately, expect a final score totaling in the mid-50s for this game whether it is a close contest or a blowout.