Kansas State vs TCU - Betting Preview and Our Best Bet 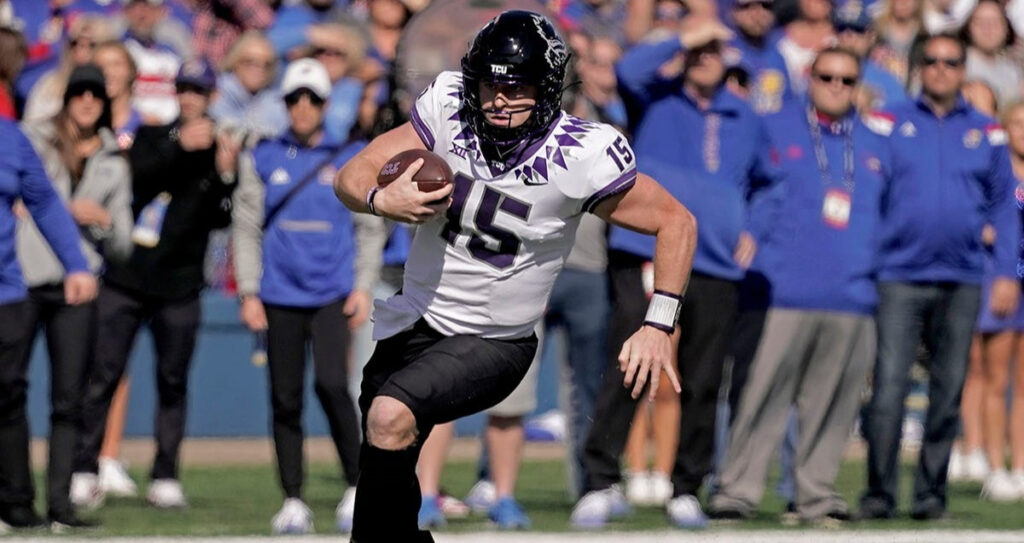 Saturday’s primetime game features two Big 12 title contenders as the No. 17 Kansas State Wildcats travel to Fort Worth to play the No. 8 TCU Horned Frogs.

While both programs had high expectations entering the season, neither was expected to be 3-0 and atop the Big 12 standings this late into conference play. TCU has relied primarily on its high-flying offense to win big contests while Kansas State’s fortunes have been pinned to their gritty, ground-it-out style on both sides of the ball.

Which team will stake its claim as the outright leader of the Big 12 after this game? Find out more as we explore these two teams in-depth below.

What to Expect from Kansas State Offense vs TCU

First-year offensive coordinator Collin Klein has the Kansas State offense clicking on all cylinders much like the former Heisman Trophy finalist did when he played for the Wildcats a decade ago. Klein’s offense leads the Big 12 in rushing yards per game (244.5) and ranks among the top 12 nationally in that category as well.

That starts with Nebraska transfer QB Adrian Martinez, who as a passer completed 62 percent of his throws for 900 yards and four TDs without an interception. Although those passing numbers are low in comparison to today’s modern aerial offenses, it’s also intentional. Kansas State chooses to run on almost 64 percent of its plays.

The Wildcats rely heavily on their backfield to produce their points. Junior RB Deuce Vaughn leads the team with 661 yards on 120 carries and three TDs while Martinez has 546 yards on 91 carries and nine rushing TDs.

What to Expect from TCU Defense vs Kansas State

The Horned Frogs have played several high-powered offenses to start the season, yielding points and yards to opponents in bunches. But a bend-don’t-break mentality has carried TCU, giving the Horned Frogs offense enough opportunity to close out high-scoring affairs.

The biggest concern for TCU is its inability to create turnovers. Through six games, the Horned Frogs have forced one fumble and picked off six passes. This allows opponents to have extended drives against TCU, and the gassed Horned Frogs are allowing a ghastly 5.5 yards per offensive play thus far.

What to Expect from TCU Offense vs Kansas State

A lot of points and an offense that moves the ball down the field. TCU is ranked third in the country in scoring (45.8 points per game) and in total offensive yards (526.7 each outing). The Horned Frogs can score quickly and efficiently under new head coach Sonny Dykes.

Senior QB Max Duggan is leading the charge for the Horned Frogs. The TCU signal-caller has 1,591 yards through six games as he completes nearly 70 percent of his passes. Duggan has tossed 16 TDs and one interception, giving him the nation’s sixth-best QB Rating at 179.9.

Although the offense averages nearly 300 yards through the air each game, the rushing attack for TCU is every bit as dangerous. The Horned Frogs net nearly 230 yards each contest on the ground, the second-best mark in the Big 12. Junior RB Kendre Miller leads the team with 91 attempts for 578 yards and eight TDs. Duggan is also a rushing threat, adding 261 yards on the ground with four TDs.

What to Expect from Kansas State Defense vs TCU

Kansas State brings the nation’s 14th-ranked scoring defense into Fort Worth. The Wildcats are yielding less than 17 points each game with a stifling defense that creates turnovers by pressuring the QB.

The defensive linemen are the Wildcats’ strength. DE Felix Anudike-Uzomah ranks near the top of the NCAA leaders chart with 6.5 sacks through six games. Fellow Kansas State DL Brendan Mott has a pair of sacks while Jaylen Pickle also has 1.5 sacks on the season.

The pressure on opponent QBs has paid dividends for Kansas State thanks to an improved defensive backfield. Safeties Kobe Savage and Cincere Mason each have two interceptions to lead a Wildcats unit that has produced nine total picks in 2022.

Expect this game to be close throughout. Coming into the contest, Kansas State has covered the spread against TCU four straight times, including wins as underdogs twice. Kansas State is also 8-2-1 ATS when playing their last 11 AP Top 10 ranked opponents.

However, TCU is a notch above the remainder of the league and Kansas State’s toughest opponent yet. The Horned Frogs' defense will produce enough stops to overcome the Wildcats' offensive prowess.

Offensively, TCU has too many weapons for Kansas State to effectively cover all night long. Look for a final score near 33-28 in TCU’s favor.