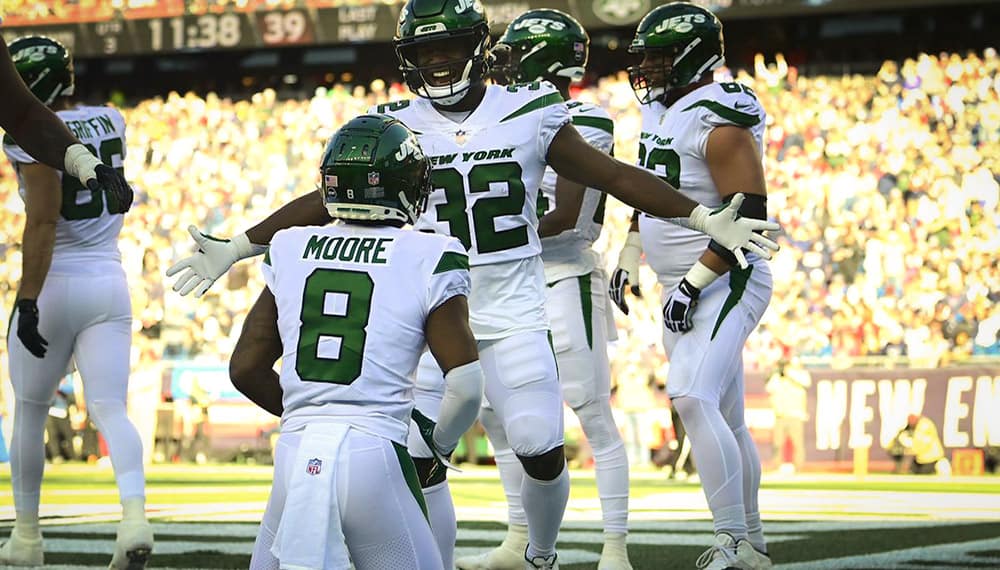 We are entering week 9 of the NFL season, which means this Thursday night matchup between the Jets and Colts is the 25th primetime DFS slate of the season, and it may be the toughest to date.

The Colts are arguably the best fantasy defense against opposing running backs, but the Jets are starting a QB that has targeted RB's on 50% of his attempts.

Michael Pittman seems like an automatic play after getting 15 targets last week, but the Jets have been really strong against opposing #1 WR's and at $10,200 Pittman has reached 2.5x value just once this season.

With a current spread of Indianapolis -10.5, we also have the game script to contend with here. Carson Wentz has averaged just 200 passing YPG in the Colts' three double-digit wins.

If you are struggling to put together lineups for this single-game slate, we will share our thoughts and who we are targeting in our optimal lineup for tonight.

If you didn't gather from our intro, we think the cash line is way down in this Showdown slate. So much so that we lowered our target value from 3x (150 points) to 2.4x (120 points).

If you missed our prop bet picks for Thursday night, we mentioned Taylor has been fairly matchup dependent this season. Given this is the best RB matchup in fantasy football, Taylor should be able to approach his season ceiling of 35 fantasy points.

If he even gets to 30 DraftKings points, that gives us 45 from the Captain spot, leaving us needing only 75 from the remaining 5 roster slots. A 40 point performance out of Taylor (certainly not out of the question) would get up halfway to our cash line for tonight.

Wentz is a considerably safer play than Pittman tonight. Wentz managed to average 18 DraftKings PPG in the three games Pittman failed to reach 1x value. It is worth noting that Pittman's two worst games since week 1 came against the Colts' two worst opponents (Dolphins and Texans).

We made the decision early on to fade the Jets running backs. Indianapolis allows just 3.9 YPC at home (includes games against Rams and Titans) and the Jets are 30th in the NFL in YPA. We have seen in the past that RB targets are the worst stat to chase in fantasy and if that plays out tonight, it eliminates your lineup.

We are chasing the big play by starting Moore over Crowder. One thing to watch for here is Moore's snap count. He managed to put up 13.1 DraftKings points despite playing just a 36% snap share. Moore is clearly a better fit than Denzel Mims in Lafleur's system, but it was Mims that led all Jets receivers in snaps. Moore is the most explosive Jets receiver, and if we need a big play for one of these guys to reach value, we'd rather bet on Moore than Crowder.

This is our Jets-insurance play. The Jets have been held to 14 points or less in half of their games this season. Should this game get out of hand, the Colts defense could rack up points against a Jets offense that is forced to play from behind.

The Colts love Dulin and we think he could see a season-high target share in a larger role with both Hilton and Campbell out tonight. At $300, we need basically nothing from Dulin for him to reach value, but think with his size and speed, he could be a sneaky big-play guy in this matchup. Particularly when you look at the Jets track record of shutting down both the slot and opposing #1 WR's.