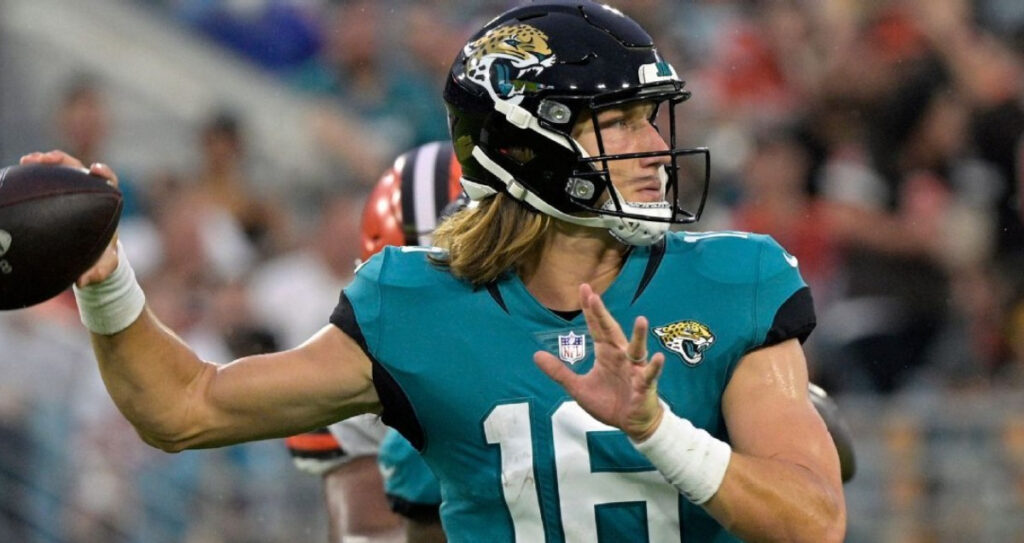 One of our favorite PrizePicks props for Thursday Night Football is on Trevor Lawrence to go Over his passing yardage total.

Tonight’s matchup between the Jacksonville Jaguars and New York Jets is assuredly one of the best Thursday Night Football games of the season. The Jaguars are just one game behind the Tennessee Titans in the race for the AFC South. The Jets are fighting for their lives and attempting to hold on to a playoff spot themselves.

With this in mind, let’s look at a few PrizePicks player props for tonight’s battle. Feel free to mix and match these props any way you like. Best of luck!

PLAY OF THE DAY: Garrett Wilson OVER 55.5 Receiving Yards

Wilson is the odds-on favorite to win Offensive Rookie of the Year this season. Although he didn’t start the season strong with Zach Wilson, Garrett has certainly begun to find his rhythm.

In his last four games, Wilson has garnered over 75 receiving yards, including one game with 162 yards. There is certainly a narrative surrounding the Wilson-Wilson connection, as many are saying that Zach is bad for Garrett’s game.

The Jaguars are currently allowing 155 yards per game to opposing wide receivers. Paired with the fact that the Jets will need to throw the ball a lot tonight, Wilson’s over on receiving yards is far and away our favorite prop in tonight’s game.

Let’s get one thing clear. The Jets’ defense is no joke. They are allowing 18.8 points per game this season, which is the fourth-best in the league.

However, they have faltered a bit as of late, giving up 22.3 points per game in their last three contests. This paired with the fact that Lawrence has achieved over 213.5 passing yards in five of his last six games, makes this an easy over for us.

Lawrence has been coming into his own this season and will look to continue his success against the Jets tonight. Honestly, we can see this over hitting by the third quarter, if not sooner.

To be completely transparent, we’re unsure why Etienne’s line is so high for this game. He has only eclipsed 65.5 rushing yards once in the past five games. After starting the season strong, Etienne has cooled as of late, which is why we’re recommending the under on this game.

Although the Jets' defense hasn’t been playing to their highest caliber in the past three games, their run defense remains one of the NFL’s best, allowing just over 111 rushing yards per game.

Look for the Jets to stack the box tonight, specifically targeting Etienne. We’d expect this line to be closer to 50 yards, given the staunch nature of the Jets’ defense.

Zay Jones is becoming one of Trevor Lawrence’s favorite targets. Jones has garnered five or more receptions in five of the Jaguars’ last six games.

Look for him to be heavily targeted again tonight against the Jets. He has certainly earned Lawrence’s trust and will impact tonight’s game in a big way.

This number is way too high! Etienne has only gone over this amount of carries in 3 of his 14 games this season. He did get 19 carries against Dallas last week, but that was a bit of an anomaly.

The Jets are supposed to have DT Quinnen Williams back for this game, and that bolsters their rush defense in a big way. New York ranks 5th in the league in yards per rush, so it should be a fairly difficult night for Etienne.

For the season, Etienne is only averaging 13 carries per game. He may get a couple more than that tonight, but we still feel like there's value in the Under. PointsBet agrees as they price this prop 2 carries lower at 15.5.