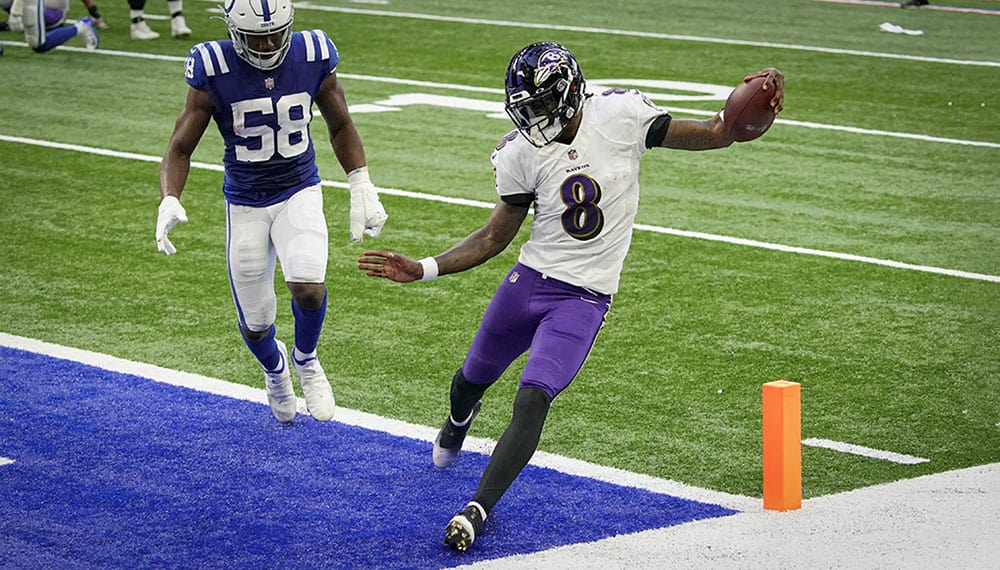 Monday Night Football can never be boring if the Ravens and Lamar Jackson are involved. Baltimore has lit up primetime recently and we would not expect less when Jackson & Co. host the Indianapolis Colts on Monday night.

Most of our models project the Ravens to easily cover the current spread, but Darius Leonard and the Colts' defense held Lamar Jackson to under 200 yards and only one touchdown last season, and this Ravens offensive line has looked like a shell of the unit we are used to seeing from Baltimore.

Both of these teams have played relatively tough schedules, but the Colts' opening four games have been particularly brutal. They lost home games to the Seahawks and Rams, lost at a desperate Titans team, before picking up their first win at Miami last week.

Now the Colts are desperate for a win and will go into Baltimore hoping to pull of the upset and kick-start their season.

Bet $20 on Thursday Night Football and Get $200 at PointsBet

Live Look at the Best Odds Available for Colts at Ravens

For a game that has seen 87% of the tickets and 91% of the money come in on one side, the spread has been relatively quiet in this matchup. It is surprising to see BetMGM with the Ravens at -6.5 and -115 still available, and that would be our recommended play if you like the Ravens in this matchup.

Given the Colts' offensive struggles and the Ravens line issues, it isn't shocking to see the total move from the 50 number we saw last week to the current 45 number that is available at most sportsbooks. For those still looking to get in on the under, Unibet has 46 at -112 up at the moment, but don't expect that to last. Here is a live look at the best odds available across this matchup:

What We Expect from Baltimore in Week 5

Both teams are coming off wins, but Baltimore’s recent run has been slightly more impressive. The Ravens have won three straight games, including a W over the mighty KC Chiefs. Their lone loss came in overtime against the Raiders back in Week 1.

If you look at the entire body of work of Baltimore, it is easy to be impressed. Lamar Jackson, Baltimore’s QB has always been seen as a run-first, mobile quarterback, but we’ve seen huge improvements in his passing game through four weeks. Lamar’s average depth of target is up 1.5 full yards compared to last year, and despite this, his completion rate is still above 61% (barely down from last season’s 63%). In their Week 4 win over Denver, Jackson had a whopping 12.7-yard average depth of target.

Baltimore’s receivers have also been playing well in the early going despite all the injuries to the receiving core. The Ravens are averaging 3 full yards more after successful receptions compared to their 2020 average. Baltimore’s average of 14.4 yards per reception leads the league by an impressive 1.1 yards.

Jackson’s newly found range and the impressive numbers showcased by this Baltimore receiving core makes us think they will be able to make some damage against a Colts team that is mightily struggling against deep passing games. Indianapolis is allowing an average depth of target of 8.4 yards (6th most in the league) and 12.4 yards after reception (7th most in the league). We don’t have a ton of faith in the Colts slowing down the Ravens.

You would think that the run game would suffer from passing numbers like this, but that is not the case. Baltimore is averaging 5.2 yards per carry, the third-best mark in the league only trailing the Eagles and the Cowboys. Baltimore's running back group of Latavius Murray, Le'Veon Bell, Devonte Freeman, and Ty'Son Williams has been productive, and we would expect the Ravens to have plenty of opportunities to run the ball against Indianapolis if the passing game can give them the advantage early.

Can the Colts Pull Off the Upset?

Offensively, the Colts are extremely limited, even compared to the 2020 version of the team quarterbacked by Philip Rivers. Indianapolis's Carson Wentz is only averaging an average depth of target of 6.6 yards with a 63% pass completion rate. Both marks are down compared to last season's 7.6 yard / 67% average.

Sadly, the quality of the receiving core isn't helping either. The Colts only reach first downs on 49% of successful receptions (down from 54% in 2020) and average just 10.5 yards per reception (down from 11.3 yards last season).

If Indianapolis is going to go to Baltimore and pull of the win, this passing game is going to have to be better. Baltimore has been solid against the run, allowing only 4.1 YPC, but their beat-up secondary has been vulnerable.

If Wentz is healthy, the offensive line can deal with the Ravens' blitz packages, and the defense plays as it did in the matchup last season, there is a chance... but that is a lot of if's.

We are taking Baltimore and laying the points. It looks like we have a realistic chance of this spread moving from 7 to 6.5, which would give us a great deal on the home team. The Ravens have one of the more high-powered offenses in the league and we have doubts that Carson Wentz’s Colts can match their offensive output.