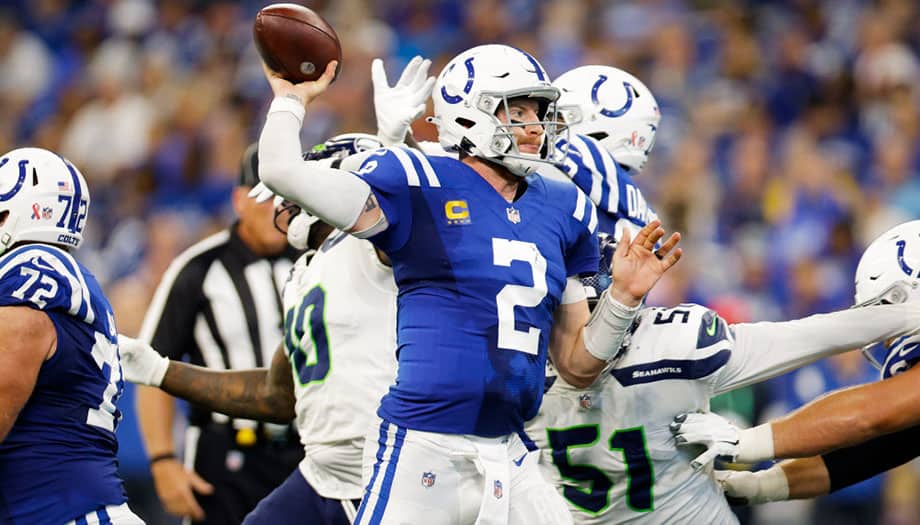 How We Are Betting the Rams at Colts

We have what appears to be a classic overreaction spot on our hands in this Week 2 matchup that features the Rams traveling to Lucas Oil to face the Colts. In our favorite bets from the early odds for week 2 article, we pointed out a spot where we thought books overreacted to the Eagles' thrashing of the Falcons, and the opening spread for this matchup appears to be a similar reaction.

The lookahead number available at a handful of sportsbooks for this contest was Rams –1, while we’ve seen books reopening Rams –4 after the conclusion of the Week 1 slate. While many would say a three-point adjustment is just right, we do still have questions about this LA squad.

PointsBet has extended its $200 NFL bonus offer through the Week 2 NFL slate! Follow these four steps to lock in your $200 bonus:

Live Look at the Odds for Rams at Colts

As we always do, let's start with a live look at the best spread available for each side, as well as the lowest and highest totals available for this matchup.

Here are the best spreads and totals currently available using live odds from the top US sportsbooks:

Notes from the Rams' Week 1 Win Over the Bears

The Rams were the largest favorites on the board going into their Week 1 matchup with the Chicago and they looked exactly like they should. The Andy Dalton-lead Bears were never competitive offensively (Dalton had zero deep pass attempts through the entire game).

Stafford, on the other hand, completed 77% of his passes and the Rams receiving core shined. Cooper Kupp saw 51 snaps and the Rams WRs combined for 16.1 yards per reception reaching first downs 65% of the time. It was a dominant performance, but we haven’t expected anything else facing a Bears team that could be truly terrible this year.

LA is still extremely top-heavy and besides a handful of strong to elite players at each position they own one of the weaker rosters in the league. While at this point everyone who matters seems to be healthy going into Week 2, LA’s depth could be tested facing a grueling defense in Indiana’s that ranked 7th in defensive DVOA last year.

On the other end of the ball, Indianapolis looked okay in a losing effort to the Seattle Seahawks. The Seahawks are a top-five team and the Colts were never supposed to win their opening night matchup. Colts QB Carson Wentz looked decent overall, especially from a clean pocket. Wentz’s average depth of target was less than 6 yards, but he hit 17 of his 23 shots when not facing pressure and besides an unlucky fumble, he didn’t make any huge mistakes.

Sadly, neither the Colts’ running backs nor the receiving core stepped up to bail out their QB. The team's top RB, Jonathan Taylor only came through for 9 yards before contact and his average at 2.8 yards per attempt after contact won't help you on any night. As for the receiving core, Michael Pittman Jr. was supposed to be the #1 guy, but he only came through for 29 total yards and the other WRs on the team ended up with even worse performances.

The overall picture around Indianapolis is ugly, but this really looks like the floor where you can only improve from. Frank Reich is a great coach and he is coming off an 11-5 season. He also has a strong defense to work with and it is only fair to expect Carlson Wentz to get better.

This was Wentz’s first game in over 9 months, and he started for a new team that he could not practice with during training camp. It was foolish to expect more out of him. Things should improve going into Week 2, especially as the Colts are at home for a second straight week, while the Rams will have to go on the road this Sunday.

Give us the Colts and the points! We are selling high on a Rams team that looked like world-beaters on Sunday and backing a Colts team that has much more potential than what we’ve seen from them so far. We don’t expect the Colts to get over ten wins this season, but asking them to stay within a field goal in their second home game is a realistic expectation.