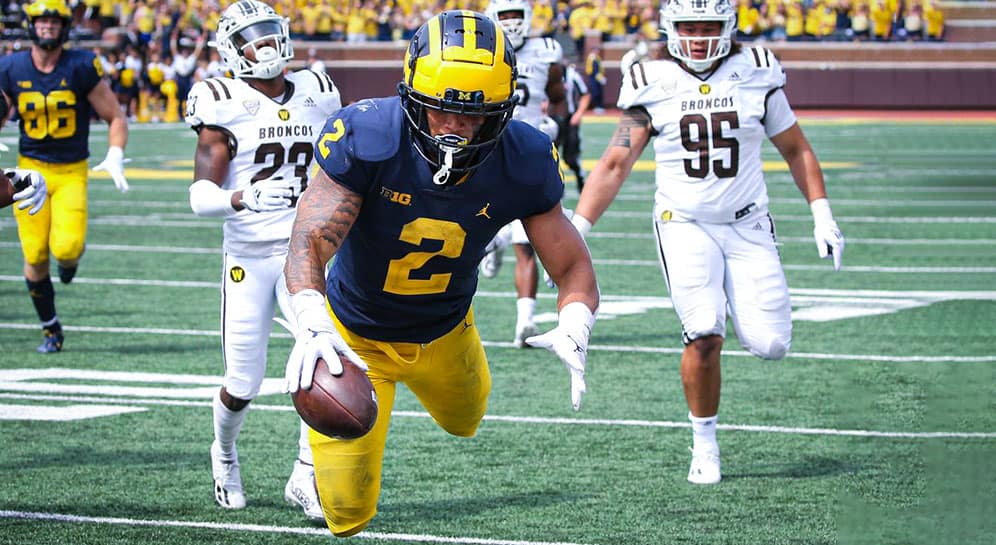 How to Bet Washington Huskies at Michigan Wolverines

College football’s primetime matchup on Saturday night has the Washington Huskies visiting the Big House to take on the Michigan Wolverines. Kickoff is set for 8:00 PM Eastern Time in Ann Arbor and the hometown crowd should be rocking! Can the Huskies bounce back or will Michigan keep rolling?

Washington was handed a stunning loss by Montana last week as a gigantic favorite while Michigan took care of business and easily covered the number against Western Michigan. Let’s break down each team on both sides of the ball and see which team may have the edge in this PAC 12 vs. Big 10 clash. We’ll also give out our best bet for this matchup.

Best Available Spreads and Total for Washington at Michigan

Most online sportsbooks have Michigan favored by six and a half to seven points over Washington in this contest. The total has been set at 48.5 at most shops.

Before getting any action down on this Week 2 matchup, remember to shop for the best point spread and total by using our free odds comparison tool. Sports bettors can improve their winning percentage significantly just by shopping around for the best number. Here’s a live look at the best odds for Washington at Michigan.

What to Expect from the Washington Offense in Week 2

The Washington offense was an absolute train wreck against Montana in Week 1. Probably the most surprising thing for the Huskies was their inability to have any type of success on the ground. Washington ran for only 65 yards and averaged just 2.4 yards per rush last week. That’s not going to cut it against the Wolverines on Saturday.

Huskies’ freshman QB Dylan Morris completed 27 of 46 passes last week but he forced too many throws and ended up throwing three interceptions. Morris will have to make smarter throws against the Wolverines on Saturday night if the Huskies are going to have any chance of pulling the upset on the road. Look for offensive coordinator John Donovan to call lots of screens and short passes to simplify the game plan a bit for the young frosh.

What to Expect from the Michigan Defense in Week 2

Michigan’s defense played well and only allowed 14 points to Western Michigan last week. This unit did give up 317 total yards of offense, but remember that most of those yards came after the game had already been decided. Michigan only had one sack last week against the Broncos so it’ll be interesting to see if they decide to bring more pressure against Washington’s young QB in this game.

Look for Wolverines defensive coordinator Mike Macdonald to load up the box to stop Huskies’ running back Richard Newton. This means that Michigan’s corners will have to be comfortable being on an island in coverage at times. It only seems smart to try and take away the run and make a young freshman QB beat you.

What to Expect from the Michigan Offense in Week 2

Coach Harbaugh had to be pleased with how his offense performed last week. The Wolverines sliced Western Michigan for 551 yards of total offense that paved the way for a blowout victory by 33 points. Michigan’s offensive line looked angry as they put up 335 yards on the ground and averaged 7.8 yards per rush.

Expect Michigan’s offense to keep pounding the football even though Huskies head coach Jimmy Lake has said that he will stack the box all day long. If the Wolverines can get Blake Corum and Hasaan Haskins into a rhythm early, this game could get ugly in a hurry. Also, look for Harbaugh to let QB Cade McNamara through the ball a bit more this week against Washington.

What to Expect from the Washington Defense in Week 2

Though the Huskies’ offense stunk up the joint against Montana, the defense played a hard-fought game. Washington gave up only 10 first downs and just 13 points last week. Washington’s defense only registered one sack against Montana but they did get five tackles for loss. This unit will need a similar type of performance against Michigan on Saturday night under the Big House lights.

Jimmy Lake has come out and said that his main focus will be trying to stop the Michigan running game. That may be easier said than done considering they gave up 127 yards on the ground to an FCS school just a few days ago. A key factor for this Huskies’ defense will be whether or not they can bait Cade McNamara into turning the ball over.

This is definitely a tough side to pick since the Huskies looked so terrible in Week 1. However, we feel this line is a severe overreaction to one bad performance by Washington and one good performance by Michigan against a MAC team. Did you know that the lookahead line for this contest a week ago was a pick ‘em? That’s quite a lofty adjustment by the oddsmakers.

The Huskies aren’t nearly as bad as they performed against Montana last week. Michigan probably isn’t as good as they looked against Western Michigan last week. In sports betting, as in life, the truth usually lies somewhere in the middle.

Keep in mind that the Wolverines are just 1-11 against the spread in their last 12 games against PAC 12 foes. We think Michigan wins a tight one but doesn’t cover. Take the points in this one! Best of luck!