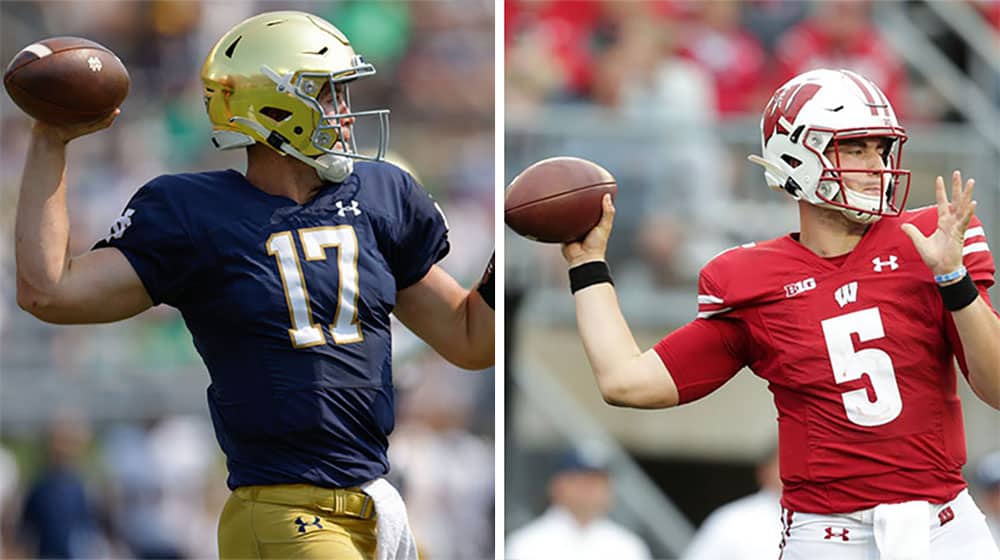 How to Bet Notre Dame vs. Wisconsin - CFB Week 4

College football’s Week 4 slate doesn’t have a plethora of primetime matchups. However, two Top 25 teams will square off on Saturday when the Notre Dame Fighting Irish take on the Wisconsin Badgers. Kickoff is set for Noon Eastern Time at Soldier Field in Chicago.

Notre Dame comes into this game with a perfect 3-0 record. Wisconsin is 1-1 and is coming off of a bye week. In this article, we’ll briefly break down the offense and defense of each team and as usual, we’ll let you know what investment we are making in this game.

In what should be an iconic matchup, oddsmakers currently have Wisconsin listed as a five-and-a-half to a six-and-a-half-point favorite over Notre Dame. Sharp action appears to be on the Badgers as the line opened at -3 on Sunday night and has risen ever since. The total is currently at 46 or 46.5 depending on what sportsbook you check.

Speaking of checking for the best odds, be sure to utilize our free odds tool. This will help you find the best available number for both sides and totals. Here’s a live look at the best odds available for every bet on the board for Notre Dame vs. Wisconsin:

What to Expect from the Notre Dame Offense in Week 4

The biggest storyline of this game will be how Notre Dame QB Jack Coan performs against his former team. The 6-3 223 pound senior has been efficient so far by throwing for 828 yards and eight touchdowns. However, those stats came against Florida State, Toledo, and Purdue so it’ll be interesting to see how Coan does against a defense as talented as Wisconsin’s.

The Notre Dame offensive line has to do a better job of run blocking for All-World running back Kyren Williams. The sensational sophomore only has 211 rushing yards and two touchdowns so far this year due to a lack of holes to run through. The big men up front also must do a better job of protecting Coan in the passing game, as he’s already been sacked 14 times!

What to Expect from the Wisconsin Defense in Week 4

Wisconsin’s defense has looked stout and stingy through its two games this season. This unit only gave up 16 points to the dynamic Penn State offense and only seven points against Eastern Michigan. Look for Wisconsin defensive coordinator Jim Leonhard to blitz his linebackers quite a bit to disrupt Coan and the Irish passing attack.

Coan had better be on the lookout for Nick Herbig and Jack Sanborn, who have combined for 10 tackles and 2.5 sacks in just two games. Cornerback Donte Burton already has one pick this year and will be looking to get another against the Irish. Safety Scott Nelson leads the Badgers in tackles with eight.

What to Expect from the Wisconsin Offense in Week 4

Wisconsin QB Graham Mertz has played okay through two games but must quit trying to force the ball into tight windows at times. The 6-3 sophomore has thrown for 326 yards but has yet to throw a touchdown and has thrown two picks. As usual, head coach Paul Chryst prefers to run the ball as much as possible and win the time of possession battle.

The Badgers offensive line is the huge, physical type of unit that we’ve come to expect every year from this storied program. The tackles and guards do a great job of giving running back Chez Mellusi plenty of gaping holes to exploit. The 5-11 junior has 265 yards and two touchdowns already this season and he should have a big day against this Irish defense on Saturday afternoon!

What to Expect from the Notre Dame Defense in Week 4

Notre Dame’s defense has looked somewhat suspect at times this season. It’s hard to believe that with all of their five-star talent, this unit gave up 38 points to Florida State and 29 points to Toledo. They had better bring their “A” game against Wisconsin’s big offensive line on Saturday.

Isaiah Foskey has been a bright spot on the Irish defensive line as he’s already registered 3.5 sacks. While the Badgers O-line will have to worry about Foskey, Mertz will have to be concerned with where Kyle Hamilton lines up on every play. Hamilton, one of the best defensive backs in the nation, already has three interceptions and 21 tackles this season.

Make sure you shop around for the best line, as getting this one under six would be ideal. Notre Dame is a fine squad but we see them being overmatched in the trenches against Wisconsin’s big boys up front.

We also don’t see Coan having much success since he’ll probably be running for his life all day long against an aggressive set of Badgers linebackers. If the Irish gave up six sacks to Toledo, how many will they give up to Wisconsin?

Wisconsin held the ball for 42 minutes against Penn State back in Week 1 and we think they could do the same thing to Notre Dame in this game. If there’s that big of a difference in time of possession, this Irish defense is going to tire out in the fourth quarter.

We see a huge day for Mellusi and the Badgers running game. Expect Wisconsin to win this one by double digits, something like 24-14. Take the Badgers!