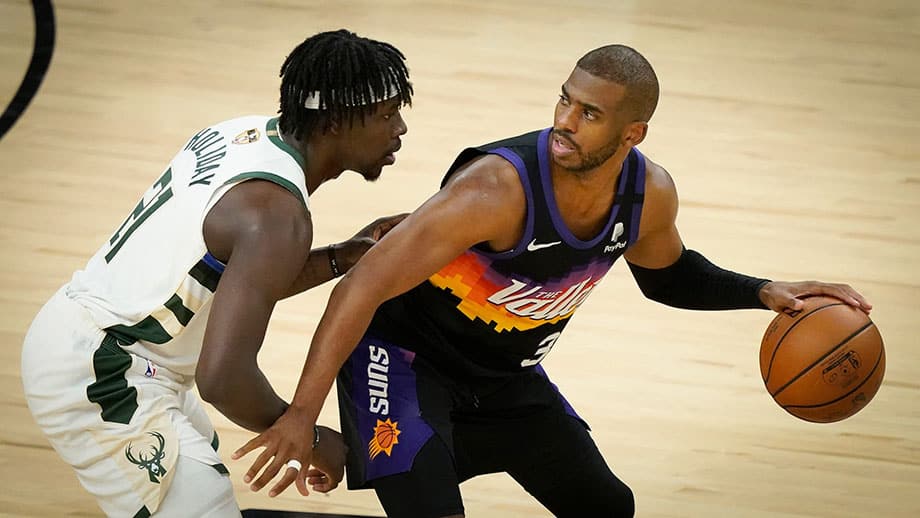 How to Bet NBA Finals Game 4 - Suns at Bucks

It was difficult to expect Milwaukee’s Giannis Antetokounmpo to sustain his amazing 42-point Game 2 performance, but the Greek Freak managed to stay in that extra gear delivering a 41-point Game 3. His performance gave the Bucks their first win in the Finals in front of 16000 fans in Fiserv Forum and 25000 more outside the arena. All this less than two weeks away from a freak injury where many feared he might have torn his ACL.

Giannis is joining an elite company dropping back-to-back 40+ point performances with 10+ rebounds in both games, as Lakers center Shaquille O'Neal is the only player in NBA history that managed to do this in an NBA Finals series before him.

The Bucks are still down a game, but can even up things with a win on Wednesday. Let’s see how they match up with Phoenix! Use the live odds checker below to find the best line available on each side of the NBA Finals Game 4.

After being a non-factor on the offensive end for two straight games, Jrue Holiday came up big for the Bucks in Game 3. Holiday finished with a game-high +22 plus/minus rating putting up 21 points on 8 of 14 shooting (57%), while still dishing out 9 assists and grabbing five rebounds. His 5 of 10 shooting from downtown is certainly encouraging going forward, as Holiday is one of the streakiest shooters on this Bucks roster.

Holiday's great shooting night coincided with Giannis making 13 of 17 free throws, which is in line with his career free throw shooting percentage, and much better than what we’ve seen from him earlier in this series.
Things going well for the other two stars on the team allowed Khris Middleton to have another average showing.

Middleton finished the game with just 18 points on 6 of 14 shooting, but he hit all his free throws and added 7 rebounds and 6 assists as well. He wasn’t playing poorly but was more selective than usual with Giannis and Holiday both enjoying big nights.

Scoring in the paint has been a key to the Bucks’ postseason run and the easy buckets from up close have been there all night in Game 3. Milwaukee put up 39% of all their shots from the restricted area making 71.9% of these attempts. Antetokounmpo was spearheading this movement, all of his 14 made field goals came from within five feet of the rim.

The Bucks also dominated the offensive glass with a 28% offensive rebounding percentage against the 18.6% offensive rebounding of Phoenix. This led to the Milwaukee scoring 20 more points from second-chance points than the Suns. This is the kind of difference no team can expect to get away with during the Finals.

More than 70% of Phoenix's shot attempts came from midrange jump shots and non-corner threes. These looks give teams way less efficient opportunities to score than easy layups in the paint.

No Booker, No Party for Suns

Devin Booker was a no-show in Game 3. The young superstar only made 3 field goals in 29 minutes and was 1 of 7 from three-point range. Both him and Chris Paul finished the game as a -13 in plus/minus rating. Booker ended up playing just 29 minutes, while Paul clocked 33 minutes.

22-year-old center prospect Deandre Ayton also spent just 24 minutes on the floor as he was in foul trouble for most of the game. Ayton immediately drew his fifth foul after getting re-inserted into the lineup at the start of the fourth quarter, a moment that essentially sealed the victory for the Bucks.

Game 2's breakout scorer, Mikal Bridges finished with just 4 points on the tail of his 27-point performance from three days ago. The 24-year-old seems to be limited to being an efficient catch and shoot scorer at this point, but he is still unable to make his own looks consistently if CP3 is not feeding him quality assists.

All of Cameron Johnson, Cameron Payne, Torrey Craig, and Frank Kaminsky finished the game with a -8 plus/minus rating or worse in a contest where Bucks coach Mike Budenholzer was dictating the terms and the Suns were playing catch-up for the entire second half.

Bucks Going Back to the Well

The Bucks re-opened as sizeable favorites for Game 4 and we don’t see why they wouldn’t win this one as well while covering the spread. With Dario Saric out of the Suns’ lineup and Deandre Ayton not being able to stay out of foul trouble the margin for error in the paint for Phoenix is extremely thin.

Antetokounmpo won’t miss the easy layups and dunks and the Suns would need a terrible free-throw shooting night from him or a total flop from both Middleton and Holiday to stay in this one. Give us the home team to win and cover for the fourth straight time in this series!